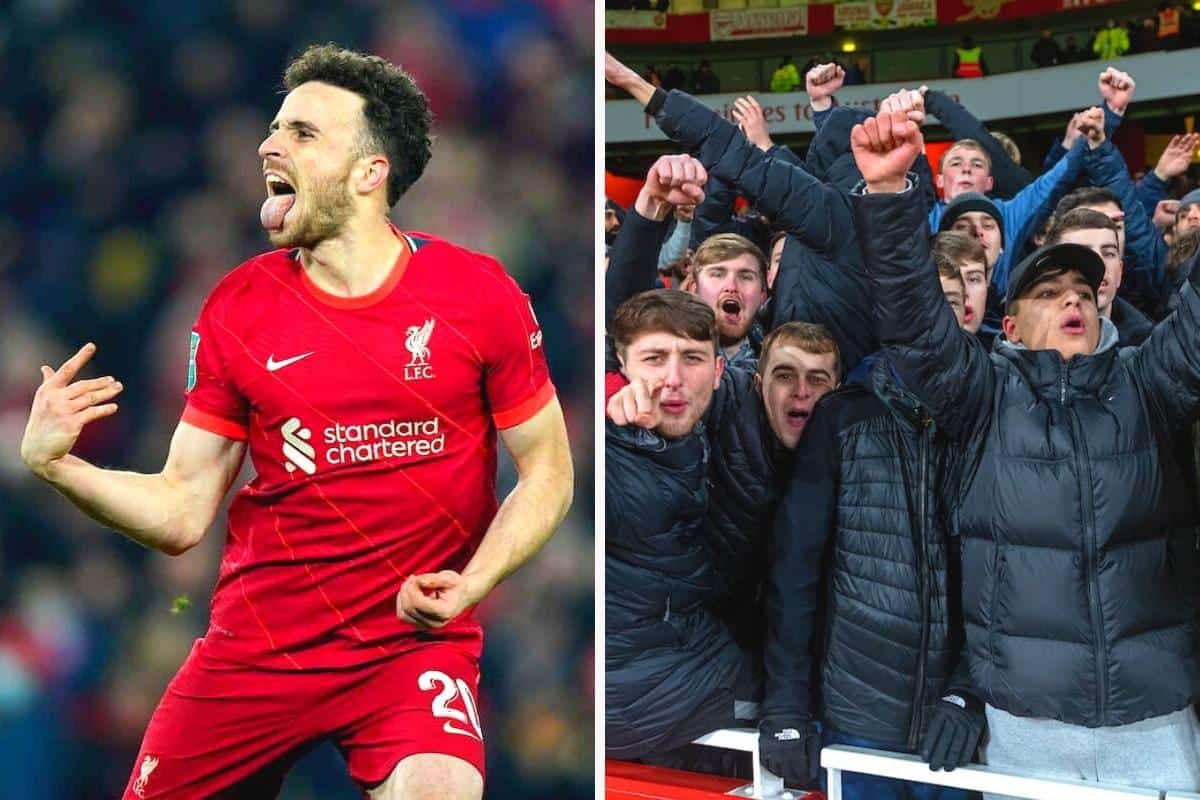 Diogo Jota proved the hero at Arsenal to send Liverpool to Wembley, continuing his impressive form in front of goal to see his name serenaded from the stands with a belting chant.

You will probably have heard and seen the love shown to Liverpool’s No. 20 at the Emirates, with his match-winning double eliciting scenes of jubilation at the Emirates.

No Mo Salah and Sadio Mane, no worries!

Jota took his tally to 14 goals this season on Thursday and his name was sung loud and proud from the stands, in the concourse and all the way back to Liverpool.

The chant for the lad from Portugal is catchy and is to the tune of a song from River Plate fans in Argentina, and if you’re unsure of how it goes:

“Ohhh, he wears the number 20,
He will take us to victory,
And when he’s running down the left-wing,
He’ll cut inside and score for LFC,
He’s a lad from Portugal,
Better than Figo don’t you know,
Ohhh, his name is Diogo!”

It’s been in the works for some time and has now taken flight. The perfect song to create the atmosphere we all crave.

It’s a cracker in action and makes it near impossible not to join in any time you hear it:

Jota's new song, love it? ? Oh, he wears the number 20,
He'll take us to victory,
And when he's coming down the left wing,
He'll cut inside & score for Lfc
He's a lad from Portugal,
Better than Figo don't you know
Oh his name is Diogo?
??? #LFC ? pic.twitter.com/LESzcOElHY

What a night all thanks to the Portuguese magician @diogojota Arsenal (a) pic.twitter.com/B7iI8FIZqo

He’s a lad from Portugal,
Better than Figo don’t you know.
Oh, his name is Diogo…??? pic.twitter.com/zbddgoWgz6

Up the False Positives. #LFC pic.twitter.com/uP9xGSMue0

As endearments from Liverpool fans go, this is right up there.