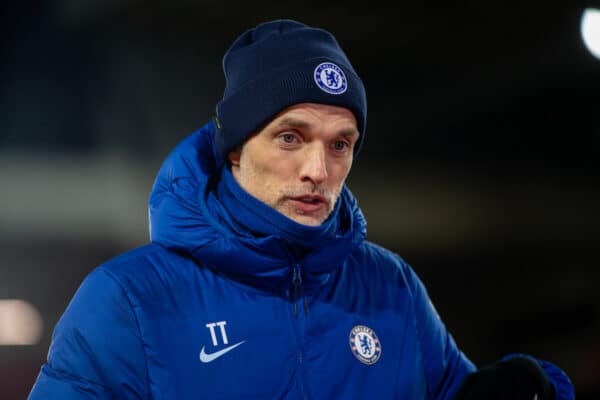 Chelsea are expected to be without Andreas Christensen for today’s League Cup final, with the defender reported not to have joined Thomas Tuchel’s side at their hotel.

Much like Liverpool, Chelsea were to head to the final with few injury concerns and a plethora of options at their disposal.

But while Jurgen Klopp sweats over Diogo Jota‘s availability for the matchday squad, Tuchel is expected to be without Christensen due to a minor Achilles injury sustained in the build-up.

Christensen has featured in Chelsea‘s last five games but is now set to drop out, according to football london, meaning one of Trevoh Chalobah or Reece James is likely to take his place.

The latter has not played since December and will be short of match fitness, with Tuchel conceding the reasonable option would be a place on the bench to start.

“He looked brilliant in the last two training sessions, let’s wait another session and let’s see if I’m crazy enough to put him on the pitch or if the reasonable side of me wins in the end and we go step by step,” Tuchel said of James on Friday.

The injury does not limit Chelsea‘s options, with either Antonio Rudiger and Cesar Azpilicueta flexible enough to shift to cover in what will be expected to be a 3-4-2-1 formation.

On facing Liverpool, Tuchel acknowledged the Reds as the marginal favourites and knows from recent encounters that it will be an arm wrestle.

“I don’t know but maybe 51 percent or 55 percent they are the favourites because of recent form and results.

“But we all know, like when we were favourites against Lille, that they would play to their full level, that they will play the role of underdog and will not accept it as a disadvantage.

“Neither do we. We have things to trust on and have experienced tight, tight matches against Liverpool. I think the last three were all draws but that will not happen at Wembley.

“We will find a winner somehow and we know very well what it takes to have a tough match against them.”