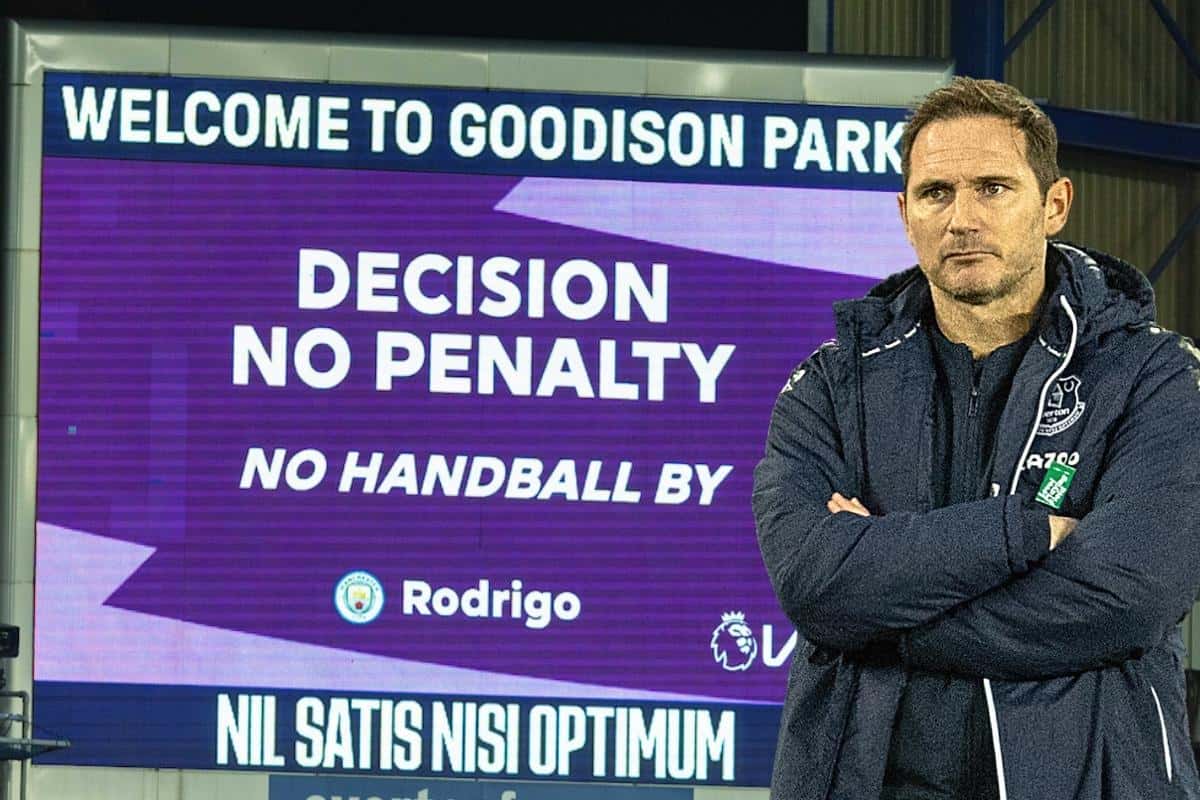 The battle at the top and bottom of the Premier League is fierce, any misstep could prove decisive but when it is at the hands of the officials, it hits a new level altogether.

Many will be aware that Man City made the trip to Goodison Park on Saturday evening and while Reds had not anticipated a gift of any kind, the night did end in controversy.

Phil Foden had edged Pep Guardiola’s side into the lead in the 82nd-minute, breaking Everton‘s strong resistance, before Rodri then handled the ball in the area – or so thought the majority of onlookers.

But to on-field referee Paul Tierney and Chris Kavanagh on VAR, seemingly the only two to take the opposite stance, there was not sufficient evidence to penalise the Man City man.

Even though the handball rule was given a directive of the shirt sleeve, which Rodri handled below, it was ultimately waved away with Everton denied a penalty and Man City holding on.

After the match, fans, not just Liverpool, called out the call and Frank Lampard had words of his own as he hinted that is was more than just incompetence at play.

“There is no doubt, there is no probably to it,” Lampard told Sky Sports post-match on the penalty decision, or lack thereof.

“The decision is incredible, incredible, and that loses us the opportunity to get what we deserved.

“That’s a VAR call. That’s Chris Kavanagh, I spoke to the referee and they know it is a penalty, the question is that is it offside and it wasn’t.

“That’s the reason we have VAR. It wouldn’t have needed more than five seconds to know it was a penalty. He [Kavanagh] should have either told the referee to give it or told him to go look at it.

Fucking farce. Obviously we all want Everton to win for our own reasons but even without that, they’ve played well, they deserve something from the game and that’s a point that’s just been nabbed off them. https://t.co/JeBkKlay2R

Just caught the Everton non penalty. Chris Kavanagh should face questions about how he can view that incident and come to the conclusion that is not a penalty. Astonishing.

“We’ve lost a point because of a professional who cannot do his job right. You start searching for whys and I can’t think why. It is so incompetent to get it wrong.

“Incompetence at best, at worst who knows? I’ll wait for the statement or apology they do when things are wrong but it will mean nothing.”

It is not the first time these two referees have been drawn into controversy but while mistakes can be accepted, the inconsistency and lack of accountability cannot.

The result moved City back to six points ahead of Liverpool, who have a game in hand, and kept Everton precariously placed above the relegation zone.