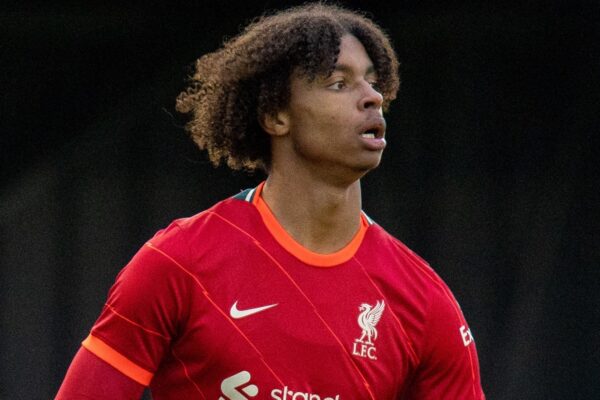 The Liverpool under-18s followed up their 4-0 win over Everton at Kirkby earlier in the season with a 3-1 victory in the return fixture, with Harvey Blair scoring two.

The mini-Merseyside derby is one of the most anticipated clashes in the young Reds’ calendar, and incredibly, over the last four years, Liverpool have won every meeting.

Their last defeat to Everton under-18s came in February 2018, and a 3-1 loss at Finch Farm, and Saturday brought their seventh straight victory since then.

Marc Bridge-Wilkinson made three changes to his side from the 2-1 win over Wolves, with Melkamu Frauendorf and Oakley Cannonier dropping to the bench and Luke Chambers left out entirely ahead of the UEFA Youth League last-16 clash with Genk on Wednesday.

One of those to come in was Blair, and the 18-year-old – who debuted for the first time in the League Cup win over Preston in October – found the back of the net within six minutes.

Everton equalised through a Martin Sherif header soon after, but Blair doubled his and Liverpool’s tally in the 38th minute after Isaac Mabaya won the ball high up.

The scoring was complete before half-time, and it was Bobby Clark who capped the derby victory after a one-two with James McConnell, having sniffed out a loose pass from the back.

Liverpool have now won eight of their last 10 games at U18s level, and currently sit second in the league as they chase Man City for the title – in a scenario eerily similar to the senior side.

To keep up the pace at the top with a win at Everton will only lift the spirits further, and now the focus can turn to Europe, with a spot in the quarter-finals of the UEFA Youth League at stake in midweek.