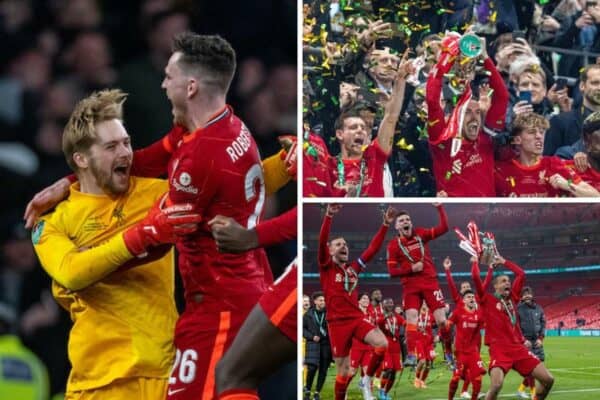 Kelleher, penalties & is this only the start? – Last word on Liverpool’s League Cup triumph

After 120 minutes without a goal, Liverpool needed to be perfect from the spot and they were to kickstart some cracking celebrations for their ninth League Cup triumph.

For only the second time in Klopp’s time at Anfield, Liverpool were back at Wembley for a final – their first in any competition since December 2019.

It had been some wait and while both Chelsea and the Reds traded goals that would not count to add more gruelling minutes to the occasion, Liverpool would be celebrating in the end.

There were plenty of moments to point to for the success and it sets up the Reds nicely as attention now turns back to the three remaining competitions. One down…

Here, This Is Anfield’s Joanna Durkan (@JoannaDurkan_) is joined by fellow writer Jeff Goulding (@ShanklysBoys1) and Jay (@jaytothelo), both of whom were at Wembley, to talk everything League Cup glory.

That was some game and some penalty shootout!

JAY: The atmosphere outside the ground was buzzing, a lot of expectation and excitement. In the ground it was great too and pulsated with momentum and as nerves kicked in.

A big fan of one of our fans letting off a smoke bomb in the Chelsea end before Matip’s goal was disallowed. It was probably the most exciting 0-0 I can remember.

I thought both ‘keepers were quality. Kelleher can definitely lay claim on being the best backup keeper in the world, and Mendy is up there with the very best too.

Diaz again was effervescent whenever on the ball too. Think the Kepa miss was written in the stars and just one of those moments we’ll laugh about for decades!

JEFF: Two big moments in the game for me, and both disallowed goals. Firstly, Liverpool’s was a heartbreaker. The celebration when that went in at the far post was incredible. People falling over seats, flares going off and smoke billowing from our end onto the pitch, it all just felt magical.

I couldn’t see who it was, then noticed Joel’s beaming grin on the big screen and imagined the forever memes that would follow and couldn’t be happier for him. It was and should have been the crowning moment of a great week for the lad.

Then came the utter desolation when it was chalked off by VAR. Somehow we all had to lift ourselves off the floor and believe again. It had been such a see-saw game and the nerves were really starting to take their toll, so when Lukaku scored, I almost crashed through the floor and descended into misery.

To be honest, the lad next to me had called every offside right all game, and when he shouted “he’s off” just before the Belgian slotted the ball in the net, I was unusually confident that it was going to be ruled out. Having watched it since, I’m not sure at all. The feeling when that one was cancelled out was the exact mirror image of the one experienced when Matip’s was disallowed. Where there had been despair, there was now relief, elation, and sheer joy. Had it stood it probably would have killed us and the journey home would have been a nightmare.

JOANNA: You’ve described that rollercoaster of emotions brilliantly, Jeff! I was just a giant ball of stress by the end of it, each time it went in for Chelsea you feared that was the one.

It was an entertaining 0-0, especially for the neutral, just too much for my heart which went to 148bpm at the start of the penalty shoot out.

A shoot out that was immaculate from our point of view, from one through to 11 – never thought we’d get that far – but each was as composed as the other and the cheek of Fabinho and Van Dijk!

The look back from the Dutchman too for Kepa was pure class, he’s on another level.

And Kelleher deserved that moment, he did fantastically well throughout – the quick reactions with is feet to deny Lukaku was simply brilliant. He’s always so calm and unfazed, exactly what we need. To have a No. 2 like him is rare.

JEFF: Extra-time seemed to go by in a blur for me, then it’s the pens. I have lived through so many of these, and every time I say “that was the tensest ever,” but this felt like agony.

All but one were terrific finishes and I’m just glad the one duff one was theirs. Imagine bringing a specialist on to deal with a shoot out and have him beaten 11 times and miss one! Incredible, but that’s exactly what Tuchel did.

The scenes that erupted as the ball sailed over the bar will live with me for a long time. They call it a “Mickey Mouse Cup,” but that’s only the case when you’re not in it. Winning is everything, winning trophies is what this great club has been built on, any trophy, they all add to the lustre and the story of this great team.

I thought the atmosphere was brilliant in our end, as always on these occasions. The dancing, and singing to Dua Lipa made it feel like a carnival and seeing the players and manager join in just added to the overwhelming sense that there is an incredible bond at this club, between fans, players, manager and staff. It really is special.

No Liverpool team has achieved success without this kind of bond and long may it continue. We should drink it in, revel in it, it is special and it’s not normal. We should cherish these days.

How did it feel to watch the Hendo shuffle back in action?

JAY: The shuffle is iconic now. Need a few more of those this season. Absolutely buzzing for the kid that Alisson took up with him too. He’ll remember that moment forever.

JEFF: I’m just so happy for all the lads. For Hendo, there’s a sense that he’s in the final stretch of his Liverpool career now and you just want him to win as many as he can.

He’s been an incredible player for us, through good times and bad and now he is such a great captain. There’s no question about his legendary status for me, I know people will still be talking about him in 30, 40, 50 years and he deserves all the glory that comes his way.

But I’m also thrilled for all the others, especially Kostas and Milly, Minamino, Konate and young Harvey, all of them really. For Diaz, who again gave us such belief that he is going to be a star, to get his first trophy within 28 days of joining the club is massive and he will be so hungry for more.

Most of all though, like Joanna earlier, I’ve got to mention Kelleher, cup finals create heroes, they always do. This one belongs to him. What a star, one of Ireland’s finest and surely the greatest Liverpool No. 2 of all time with three penalty shoot-out wins to his name. Couldn’t be happier for him.

JOANNA: It feels like it has been a long time between the last shuffle and this one, made all the more special with fans able to witness the moment.

Not always a fan of the walk up the Wembley steps on these occasions, but it did not take anything away from the moment and the smiles said it all as they each took a turn – Klopp’s dance with it a particular highlight.

This winning trophy business is easy business for Diaz, isn’t it! Time to add to it now!

And that’s one down, how are we feeling about the other three?

JAY: I’m very optimistic we can win all four, perhaps with a bit of luck.

I think Thiago being available as much as possible will define the rest of the season. We have so much attacking talent and VVD is at his very best. It’ll be some ride in the next few months.

JOANNA: It’s clear what the agenda is for the team and it’s the same for the fans. If any group can do it, it is this one.

It’s not going to be easy but like Jay said, with a bit of luck and not too many injuries we will find ourselves in the position to make history – which these Reds love to do.

You certainly don’t want to get ahead of your station and there are plenty of hurdles to clear before the business end, but Liverpool are bursting with confidence and this trophy only boosts it further.

Whatever happens next, we’re in for some ride and I’m sure these scenes of celebration will not be the last this season!

JEFF: I don’t want to get carried away. There is a long way to go and some big games stand between now and ultimate glory.

That said, there is a real 2001 feel about this season. You can feel momentum and belief and as someone old enough to have lived through that, I can say this feels the same. The big difference is, with the greatest of respect to that Houllier team, this one is on another level.

Of course, so are our opponents, especially in the Premier League. But the main thing is that it’s very doable and as things stand right now, there is only one team that can do it, and that’s us. What a time to be a Red.

Make no mistake, if they do go on and win all four, they will have earned the title of greatest Liverpool team of all time, maybe even the greatest team in English football, a team for the ages.

They will build statues to them and rightly so. Sorry, I said I didn’t want to get carried away. It’s hard not to with these lads, it’s just that kind of season. They are that kind of team.