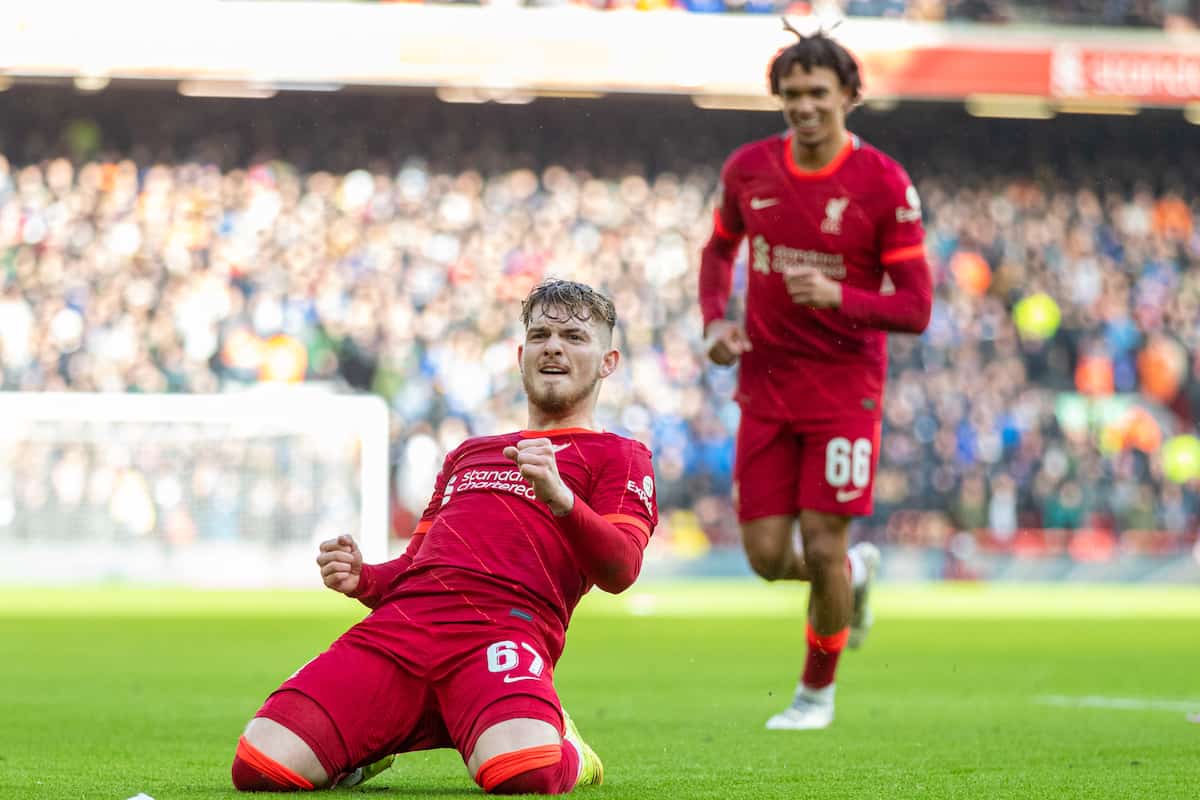 Sunday afternoon brought a 147-day wait to an end as Harvey Elliott marked his return to action, capping it off with a goal and celebratory messages from his teammates.

The 18-year-old admitted he had “a little tear to my eye” as he stepped out on the Anfield turf just before the hour mark against Cardiff, with his long road back officially over.

That in itself was a moment to savour but his stunning volley on the turn added the icing on the cake, with his dad, Scott, having shown just how much it means in the stands.

And as Elliott let his “absolute dream come true” sink in, his ever-supportive teammates continued to show their love following the 3-1 win over Cardiff.

Andy Robertson, who provided the all-important assist for Elliott, was “buzzing for the starboy” but questioned a chant for the teenager that “sounded familiar”:

And if you thought that was class, Elliott’s response takes it up a notch as his humble character came to the fore once more:

“Thank you my man they’ll only be one man to this chant and that’s you. Cheers for the assist as well!! It’s probably boring the amount of times people have thanked you for assists now but I appreciate it,” Elliott wrote in reply on Instagram.

Jordan Henderson, Tyler Morton and Neco Williams added their names to a long list of those to send the 18-year-old messages, as too James Milner.

The veteran of the side was left “absolutely buzzing for Harvey” following his 32-minute comeback, with the No. 67, of course, sending this thanks in return.

Diogo Jota, likewise, had nothing but praise for his teammate, telling ITV: “It was a big injury, he knows that.

“All the hard work he put in in the gym to be fit, to be able to be here today, to play and to score! Congratulations.”

The day could not have panned out any better for Elliott and for Liverpool, who welcomed Luis Diaz into the fold, saw Thiago make his comeback and secure their place in the FA Cup last 16.

It keeps Jurgen Klopp‘s Reds in the hunt in all four competitions, which made for a happy squad on return from a 14-day break:

Next up for Liverpool is the Premier League meeting with Leicester on Thursday in what is the second of seven games in the month of February. Up the Reds!