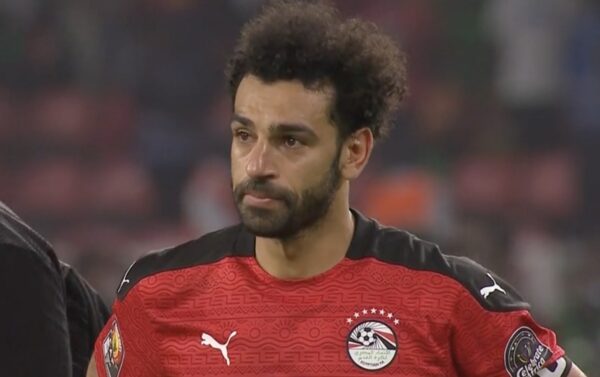 Jurgen Klopp is hopeful Mohamed Salah can be involved when Liverpool take on Leicester on Thursday night, but his workload with Egypt suggests he may need a rest.

Salah was left despondent after Egypt’s Africa Cup of Nations loss to Senegal on Sunday, having given everything for his country throughout the tournament.

The 29-year-old is undoubtedly the star of Carlos Queiroz’s side, with only four of his starters in the final plying their trade outside of the Egyptian top flight.

Wearing the captain’s armband, he was often the inspiration for his country as they clawed their way through the tournament – in total, Egypt only scored four goals on their way to the final.

There were no goals, again, on Sunday evening, with the game going through extra time and on to a penalty shootout, with Mane scoring the decisive spot-kick to clinch the trophy for Senegal.

Liverpool expect both Salah and Mane back on Merseyside later this week, and Klopp has set his sights on including the pair for the Premier League clash with Leicester.

But Salah’s ridiculous workload over the past fortnight may make that too much of a risk, with Egypt going to extra time in all four of their knockout games.

Salah played almost every minute of every game in Cameroon, only substituted once – that being in the 120th minute of the 2-1 quarter-final victory over Morocco.

Therefore, he clocked over 480 minutes on the pitch over 12 days from the last 16 to the final, having also played the full 90 minutes in each of Egypt’s three group games.

Egypt played seven times over 27 days, or once every 3.9 days, with Salah effectively playing every minute, his importance to Queiroz making him undroppable.

That could prove to be an issue for Liverpool as they look to manage the fitness of both Salah and Mane – who himself played all but 20 minutes for Senegal – upon their return to availability.

“I have to talk to them, I don’t know,” Klopp explained, when asked about plans for their involvement.

“If they have one thing, they have rhythm! They’ve played obviously quite a few games.

“We will see, I have to speak to them then.”

It makes sense to ensure Salah and Mane are given ample time to recover following their exploits at AFCON, particularly given Klopp’s attacking options are much healthier than when they left.

The addition of Luis Diaz, along with the return of Harvey Elliott and the impending comeback of Divock Origi, swells a group that also includes an Roberto Firmino, Takumi Minamino and an in-form Diogo Jota.