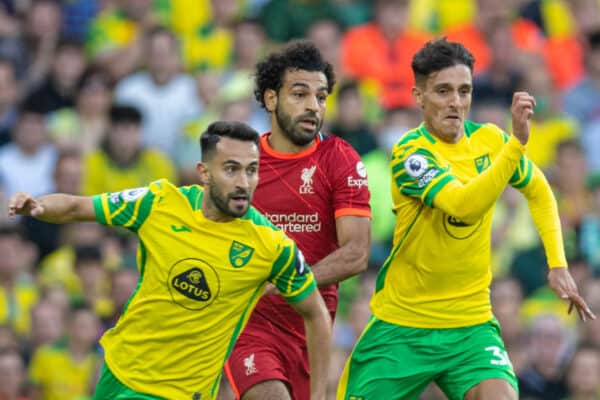 Norwich need to “come up with some tricks” against “grandmaster” Liverpool

Norwich head coach Dean Smith accepts he is going up against one of football’s grandmasters when he takes on Jurgen Klopp – but hopes a few of his own chess tactics could deliver checkmate at Anfield.

The Canaries head to Liverpool on the back of a 4-0 home defeat by leaders Manchester City, which left them in the relegation zone.

Smith knows taking on the top two sides in the country will not define Norwich’s survival battle, but the former West Midlands schools chess champion is not about to resign the prospect of an unlikely positive result.

“Jurgen certainly has got a few more pieces than me at the moment, so there would be an advantage in terms of the quality of players,” said Smith, who masterminded a memorable 7-2 win over Klopp’s side when in charge of Aston Villa in October 2020.

“Our mindset is going to be a really important part of it. We have to try to out-think (Liverpool) where we can.

“I saw them (play in Europe) during the week and it is amazing what Jurgen has done at Liverpool in the time he has been there, it is something like 50 Champions League wins alone now.

“So, yes we are coming up against a grandmaster and I am really looking forward to it.

“We have had some good battles against him before, but obviously I was at a different club at the time, so it would be my first with Norwich.

“We will have two in the space of two weeks (with the FA Cup tie), so we have to come up with some tricks where we can.”

Smith added: “Football is a little bit like chess – you are trying to come up with solutions to problems that opposition give you and I am trying to get our players to make better decisions.”

Norwich were punished by City for some individual errors as the champions eventually coasted to a comfortable victory after Phil Foden bundled in a second goal soon after the restart.

Smith knows his team cannot afford to switch off again when they face Liverpool.

“We certainly have to limit our mistakes, that is the biggest thing,” the Norwich boss said.

“When we reviewed the (Man City) game, we spoke an awful lot about concentration and focus levels. It is something that we have to get better at.

“Little lapses in concentration against the top-level players can cost you, we found that and it is something we will be stressing to the players.

“It is always small, marginal things which can change the game at times.”

Smith added: “I don’t think our season will be defined by these games – but it is not a free hit because we can’t be afforded free hits where there is only 14 games to go, so we have got to see it as an opportunity to try and get points.”

Norwich will be without Republic of Ireland striker Adam Idah, who is expected to miss the rest of the season following knee surgery.

Idah, 21, picked up knee and ankle problems during the draw against Crystal Palace. Following initial tests, it was determined an operation was needed.

“He went in for an arthroscopy and then for a meniscus (cartilage) repair, he should be out for the season now,” Smith said.

“It is a big blow because he broke into the team and was doing well, so it is disappointing for him and for the team, but it gives other players an opportunity now.”