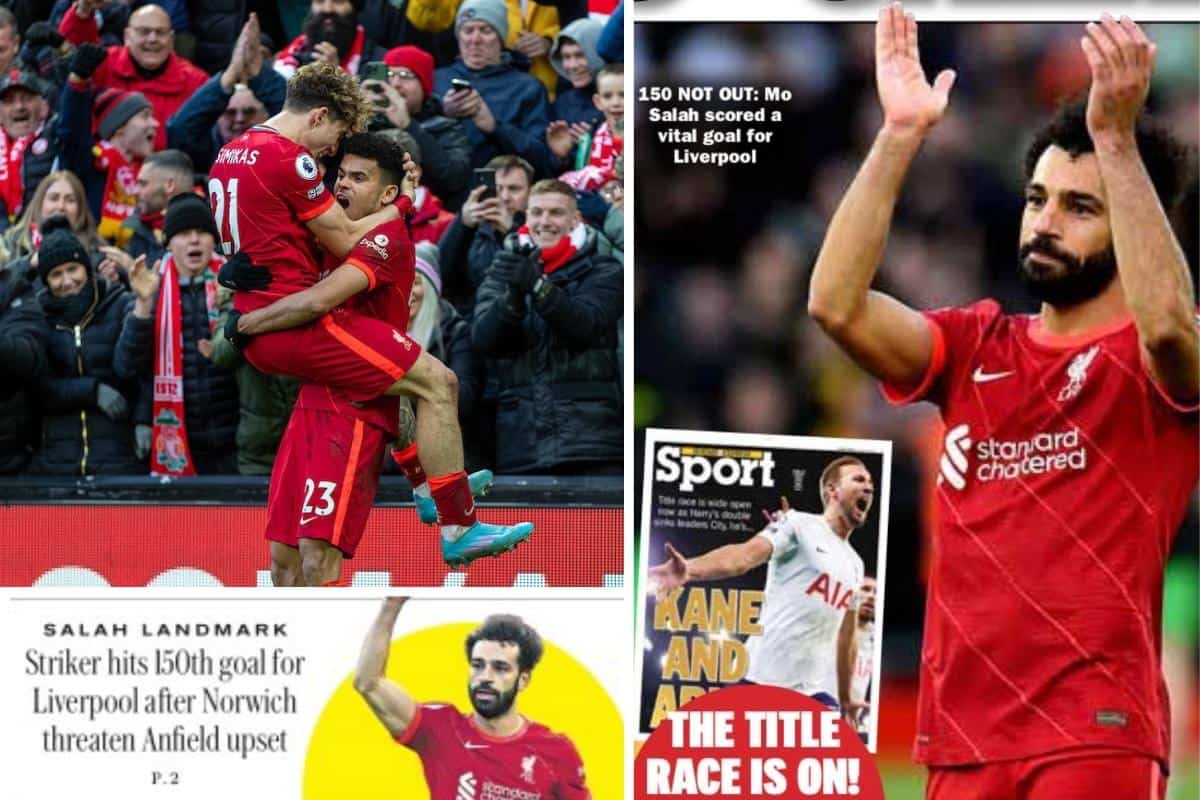 The media waxed lyrical over Liverpool’s response to going behind to Norwich and some individual magic on show, following their 3-1 win at Anfield.

The Reds faced another must-win game in the Premier League on Saturday, such is the relentless nature of leaders Man City.

Milot Rashica’s opener threatened to cause a huge upset at Anfield, but Sadio Mane and Mohamed Salah quickly turned the game on its head later in the second half.

Luis Diaz then completed the win, finishing coolly in front of the Kop to register his first-ever Reds goal.

The nature of Liverpool’s win was admired by some… 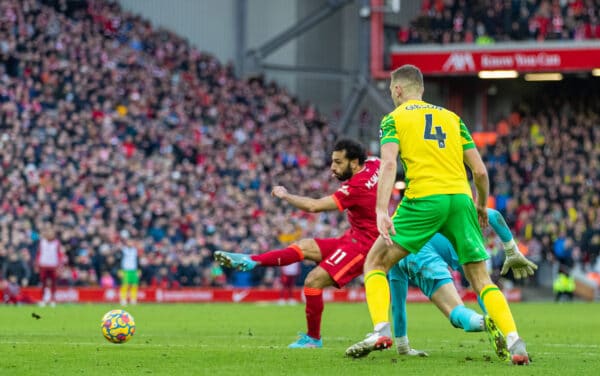 Goal‘s Neil Jones praised the manner in which the Reds stood tall in adversity:

“Who says the Saturday afternoon kick-off is a thing of the past?

“Anfield was bouncing here as Liverpool kept up their Premier League title push with victory over Norwich. It finished 3-1, though the scoreline tells only half the story.

“Jurgen Klopp’s side certainly had to do things the hard way. They trailed as late as the 64th minute against Dean Smith’s relegation-threatened Canaries, who looked like they might cause the biggest upset of the season after Milot Rashica’s deflected opener.

“The Reds had not been themselves to that point, but they came roaring back in spectacular fashion, with all of their big guns delivering.”

Here at This Is Anfield thought likewise:

“The second half looked like it might be all about how Liverpool would break the 0-0 deadlock, but instead, it became about how they could come back from a goal down.

“They soon levelled the scores through Sadio Mane after Milot Rashica’s opener, and straight from the kickoff after the equaliser was scored, there was an inevitability about the Liverpool comeback.

“Little more than one second had passed before the Reds won the ball back and began mounting attacks once again. Anfield erupted and the players responded. 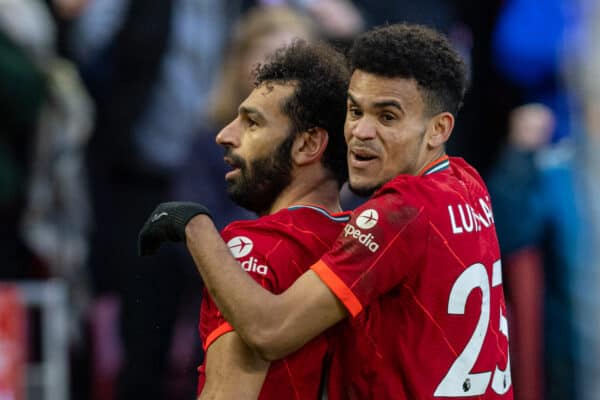 “Another Liverpool win. Another milestone for Mohamed Salah.

“Salah scored his 150th Liverpool goal in the midst of what turned into a stirring second half comeback win over Norwich City. Jurgen Klopp’s side almost made a mess of what looked destined to be a comfortable afternoon.

“The Egyptian reached the landmark quicker than Ian Rush and Robbie Fowler. Only Roger Hunt, who spent much of his early Anfield career in a lower division, did it in fewer games. It was a typical Salah finish, keeping his poise while defenders manically tried to prevent him shooting.

“While he celebrated, other teammates dashed to goalkeeper Alisson who had delivered the assist with an instant goal kick.”

The Guardian‘s Richard Jolly felt it was a good day for Liverpool’s entire front-line:

“Goal by goal, landmark after landmark, Mohamed Salah is establishing his place in Anfield history. Less than five years after joining, he brought up 150 goals for Liverpool with a strike that combined pace, audacity and importance.

“As he became their second quickest player to 150 — faster than Robbie Fowler, speedier than Ian Rush, sooner than Michael Owen, Kenny Dalglish, Steven Gerrard or Billy Liddell — he helped transform an awkward afternoon for Liverpool into an enjoyable one.

“It was about the spectacular as well as the statistical and it was capped by a brilliant first Liverpool goal for Luis Díaz.”

“As their other scorers, Sadio Mane and Salah, have both become centurions under Jurgen Klopp, the precedents for the newcomer are hugely encouraging.”

Jones was another who was in awe of the quality of the goal:

“Anfield, frustrated to that point, responded accordingly, and it was certainly alive when Jordan Henderson clipped in a ball which Kostas Tsimikas nodded back across goal for Mane, who adjusted superbly to score with an overhead kick from six yards.

“It was bouncing soon after as a piece of quick-thinking (and immaculate technique) from Alisson released Salah in behind Brandon Williams.

“Salah still had a lot to do, but he teased Angus Gunn, the Norwich goalkeeper, on the edge of the box before rolling in a right-footed shot that deceived two defenders on the line.

“It was his 150th goal for Liverpool, and he has reached that number in only 233 games. Only the great Roger Hunt, in Reds history, has got there quicker.

“Salah has 25 in all competitions this season, and knowing him, he will be frustrated that he doesn’t have more. He might have had a hat-trick here, for sure.”

Other individuals were admired by others… 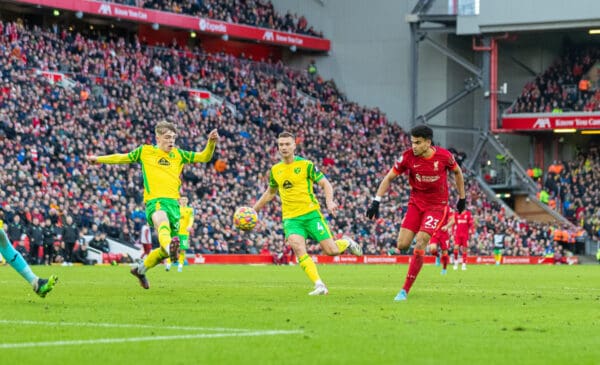 “The Reds listened – signing Diaz a couple of days later – and it’s since become clear why Carragher was so desperate for his former employers to get the deal done.

“The Colombian – who scored 14 league goals for Porto during the first half of the season – looks like a Liverpool legend in the making.

“He’s got all the traits needed to be a success in Klopp’s team, as well as an x-factor that’s certain to entertain Anfield for years to come.

“The crowing moment of Diaz’s performance was his late goal, dinking the ball over goalkeeper Angus Gunn to secure all three points for his new team.”

Luke Reddy of BBC Sport felt the change in formation and influence of Jordan Henderson and Thiago was key:

“Klopp moved to bring on midfielder Thiago and striker Divock Origi in place of two midfielders in Naby Keita and Alex Oxlade-Chamberlain.

“The extra attacking body seemed to briefly throw Norwich out of their stride and a fine switch of play from the impressive Jordan Henderson allowed Tsimikas to tee up the unmarked Mane, who swept home.

Henderson completed 97% of his 123 passes – including a sublime through ball for Diaz’s late strike.”