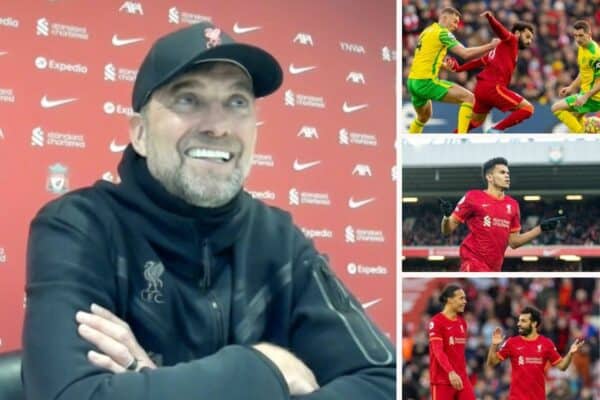 Jurgen Klopp had plenty to discuss after his side came from behind against Norwich to earn a valuable 3-1 win, that included firsts and milestones.

Here are four key points from the manager after the win over Norwich:

It was goal No. 150 for Mohamed Salah when he steered Liverpool into the lead, making him only the 10th Red to ever reach the milestone.

In that time there have been a spectrum of world-class finishes and it’s apt then that the boss struggled to pick a favourite.

“Today was a really cheeky one,” Klopp said.

“I remember the Chelsea goal when he came inside and a thunderbolt in the far corner, few dribbling vs. City and Watford, the United goal I like a lot the 2-0.

“I can’t remember all 150 but I can remember a lot, there were some good goals. Really special.”

After managing a clean bill of health for a fleeting moment, two injuries struck at the San Siro and the manager had mixed news.

“We really don’t know 100 percent with Diogo, it looks a little bit better than we first thought,” Klopp said of his ankle injury.

But as for Firmino, “we didn’t even know that has something until he felt it only after the game.

“We all thought a little thing but it’s a muscle injury. We have to see how long it will take. But for sure not the next game so we have to see.”

This is where the injuries stop, we beg.

Luis Diaz‘s third appearance for the club resulted in his first goal with his run in-behind duly found by Jordan Henderson at the Kop-end.

A moment to savour and a milestone quickly ticked off, which is only good news for the Reds.

“We saw now two games with Luis, where he was absolutely incredible and today it was hard work for him as well,” the boss said of his forward.

“It was a tricky one, staying on the pitch and staying in the game shows the real quality.

“We changed system and brought Luis in the centre and he makes this wonderful run in the centre, it’s good – he’s just an outstanding talent!

“I can’t remember my first goal, it was probably really nice, but I think he’s very happy tonight.”

Safe to say things were not quite going as planned for Liverpool having failed to find the breakthrough in the first half and with Norwich then opening the scoring.

It saw Liverpool’s bench react and change to a 4-4-2, with Thiago and Divock Origi injected at the hour mark.

The manager was quick to say it was “a coaching team effort” post-match and came as “we thought it made sense to make that early change just to calm it directly down again.

“We did that literally obviously, with Thiago and a system change to 4-4-2.”

It was then all about finishing “the situations off,” which Liverpool did “beautifully” through Mane, Salah and Diaz.