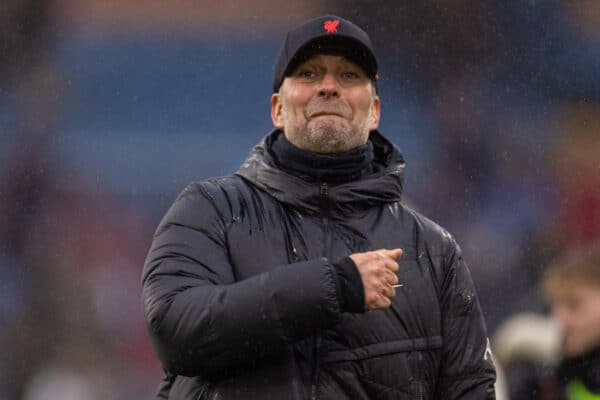 Liverpool’s 1-0 win over Burnley wasn’t a classic for the ages, but the media still found plenty of positives at Turf Moor.

It was Fabinho‘s strike shortly before half-time that sealed the three points for Liverpool, on a rainy afternoon in Burnley.

The Clarets had their chances, particularly in the first half, but the Reds dug deep and overcame a potential banana skin.

Some hailed the magnitude of the Reds’ victory…

“In a normal world this was the kind of grinding victory which defines genuine title challengers.

“In the world of Manchester City? Liverpool yet again succeeded in delaying the tightening of the blue ribbons on the Premier League trophy.

“The temptation is to label this an ‘ugly win’ at Turf Moor, secured with a Fabinho goal in the first half which was in keeping with the match – untidy and forgettable.

“Yet over the course of a 38-game grind, these points often carry greater value. Jurgen Klopp’s traditional trio of fist pumps to the away end at full-time confirmed what Pep Guardiola suspects. Liverpool have not given up yet, even if it looks like they are clinging on to the most slender of hopes.”

Dominic King of the Mail was of a similar thought process:

“These are the days Jurgen Klopp values more than most. A solitary goal, a clean sheet and three points secured in wretched conditions, it was football stripped back to basics and the Liverpool manager’s delight was impossible to contain.

“No medals will ever be handed out for winning at Turf Moor but the importance of this victory, secured by Fabinho’s fifth strike in his last seven appearances, means that Liverpool remain firmly in the hunt for when medals will be handed out in May.

“One-nil is a score that Klopp ‘absolutely loves’ and that bare fact summed up the way this game went; Liverpool struggled to find moments of magic, Burnley – who have only won once in front of their fans since January 27, 2021 – huffed and puffed and were short of quality.

“Put all that together and there was never any chance of this being remembered as a Premier League classic but the way in which Liverpool ground this victory out – their sixth in a row – could have long-term implications as they keep up their pursuit of Manchester City.”

Neil Atkinson of The Anfield Wrap revelled in an invaluable three points:

“Through the wind and the rain. It has never been more apt.

“It was a dreadful game, in truth. But it was perfect. It told us yet again that Liverpool can outplay you and can outfight you and you can choose which you’d prefer. It told us that Liverpool are deadly serious all of a sudden. Four on the bounce. Certain.

“This hill is huge, let’s be clear. Liverpool are coming up it, though. The heavens opened. It blew a gale but Liverpool were resplendent, the manager gave it the big one and they got what we all deserved.”

There was much appreciation for Fabinho and Virgil van Dijk…

This Is Anfield lauded the Brazilian’s brilliance all over the pitch:

“Who had our Brazilian defensive midfielder making the late charge for Golden Boot then?!

“OK, he might not quite get to Salah levels of celebrations, but he has been a vital and most-appreciated additional source of goals over winter.

“His scrambled, scruffy finish here at the second attempt was his sixth of the season, his fifth in 2022 – but the great positive is that it never comes at the expense of his elite-level defensive work.

“Fabinho made two really important interventions in his own penalty box, including a blocked cross after the Clarets cut through and had an otherwise clear chance down the left in the second half.

“Passing, ball-winning, positional play and stopping those second balls being won – he’s perfect at the lot and our match-winner once again.”

“In a year when Jurgen Klopp has spent £50m on a forward, Liverpool seem to have gained a prolific scorer. Not Luis Diaz – or not yet, anyway – but Fabinho. Klopp’s title hopes may be faint but they could have been extinguished without his newly potent holding midfielder.

“Fabinho’s fifth goal of 2022 reduced the gap to Manchester City to nine points; had it not been scored by the man who shields the back four, the temptation would have been to call it a poacher’s goal, scrambled in from half a yard and showing a predatory instinct associated more with strikers.

“Even by Burnley’s standards, it was inclement weather. If the stereotype suggested it was scarcely a day for Brazilians, Fabinho proved otherwise.”

King was in awe of Van Dijk, who he thinks is now back to his best:

“The timing of the goal could have left Burnley deflated but, belligerently, they tried to ask questions again of Liverpool in the second half.

“The trouble was, though, they never got into the positions to really profit. The other factor, of course, was the performances of Virgil van Dijk and Joel Matip.

“Van Dijk, in particular, is at his peak again and to be at such a level is a testament to how hard he has worked and the ability with which he has been blessed. There was never any guarantee he would get to this standard given the catastrophic nature of the injury he sustained.

“As Burnley prodded and tried all they could to cause discomfort, Van Dijk glided across the pitch and brought calm with an immaculately timed foot in here or a header there. Nothing ever flusters him and that composure was crucial in helping Liverpool see out the contest.”

The Mirror‘s Tom Victor was disappointed with Roberto Firmino‘s showing:

“With a number of players competing for starting berths – including new arrival Luis Diaz, who started on the bench – no one is assured of a starting place.

“Firmino was noticeably quiet against the Clarets, though, and it was far from the best audition ahead of some big games at home and in Europe.

“Even the movement for his best chance of the game, a misplaced header after straying offside, won’t have delighted those watching.”

“With Sadio Mane available again after helping Senegal win the Africa Cup of Nations, Liverpool manager Jurgen Klopp opted to restore the old guard and started with a front three of Mane, Roberto Firmino and Mohamed Salah, with in-form Diogo Jota on the bench.

“But in driving rain and a blustery wind, the visitors’ attacking trio often struggled to make an impact, although Mane did play an important role in the breakthrough goal.”

“Christ, he had the game Curtis had the other day. Must be like a virus that gets passed from man to man. Was pretty shite, which happens.

“I do worry about him, though. I don’t know, just seems miles off it. Not imposing himself, not able to press with any kind of effectiveness at the minute.

“Looks like he can only run in a straight line which isn’t really that useful unless you are doing the hundred metres.”