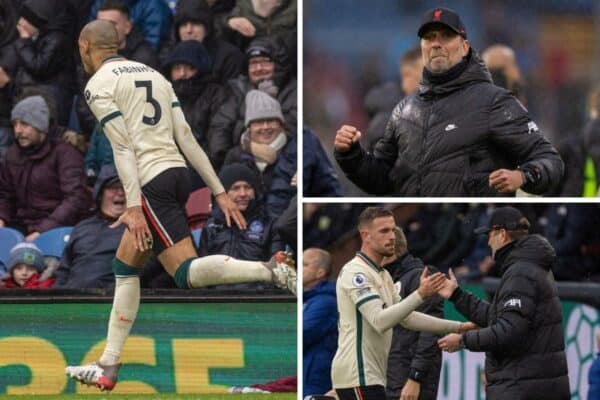 The good, the Fab and Henderson’s poor form – Last word on Burnley 0-1 Liverpool

Liverpool may have battled to a vital 1-0 win at Burnley on Sunday, but the form of captain Jordan Henderson is a concern.

The Reds came up against a Clarets team rooted to the bottom of the Premier League, but awful weather made it a tricky assignment.

In truth, Jurgen Klopp‘s team never got going at Turf Moor, and it was Fabinho‘s first-half strike that saw them over the finish line.

The win took Liverpool back to within nine points of Man City with a game in hand, as they refused to go away in the title race.

DAN: Although many may point to the lack of clear-cut chances created by Burnley – especially those that weren’t followed by an offside flag some hours later – that was a hard-fought victory.

But in those types of matches, we get to see a different side to this Liverpool squad – one that is resilient and willing to battle for every moment in a monsoon at Turf Moor.

Performance-wise it was far from vintage Liverpool, but it wasn’t really an afternoon for free-flowing attacking play so a back-to-his-best Virgil van Dijk, Alisson and Fabinho take the plaudits.

HENRY: I’m with Dan – those offsides can skew peoples opinion of games, because they look like great chances but they’re not!

That being said, it was a grind of a game, even though I never really felt Burnley were going to find an equaliser.

The weather was grim, the standard of football was poor because of it and our attackers were well short of their best.

The positives easily outweighed the negatives, though, with the spine of Alisson, Van Dijk and Fabinho again proving to be so key.

I thought Andy Robertson and Naby Keita did well, too, even if they weren’t necessarily vintage performances.

An ugly win that we used to have to witness Man United churn out year after year – how the tables have turned!

MATT: Those offsides skewed the opinion of the commentators. It seems the ‘high line’ is their new ‘zonal marking on set-pieces’ which they struggle to understand.

Anyway, Alisson and Fabinho: both superb again. Our two best players in the last two months by an absolute distance.

Thought Thiago was good when he came on, added some calm and control, which was needed.

DAN: Outstanding. Not only in this game, but Fabinho is one of a number of players in this Liverpool side performing at the very peak of his powers recently.

So pivotal is the Brazilian to the way we play that the impact injuries had on his season in 2020/21 couldn’ve been among the most damaging factors to derail the campaign midway through it.

Adding regular goals in recent weeks, while still being the best in the business at the defensive work as a No. 6; so much of how Liverpool finish this season will depend on Fabinho.

Fabinho may not quite get the same love as the likes of Van Dijk and Mohamed Salah, but is he right up there as one of Liverpool’s most important players.

He was the Reds’ standout performer on Sunday – his goal was the icing on the cake – and he brings a calmness to everything that is priceless.

I used to adore Javier Mascherano and knew it would take something special to top him. Fabinho is even better and a more complete footballer.

As Dan says, not enough is made of his absence last season and a spell out of the team in the coming months would be damaging.

MATT: It’s strange how scoring a few goals opens the door for Fab to receive widespread praise, but it’s good to see him getting the recognition as so much of what he does well is the unnoticed stuff.

His positioning, shielding, body shape in front of the defence is absolutely crucial.

If we go on to win the Champions League it will be because of him. We’d struggle to win it without a player of his type.

DAN: It is a concern, perhaps more so for himself than us as fans, considering Harvey Elliott, Curtis Jones and Naby Keita are all chomping at the bit to step in.

Klopp is always desperate to include Henderson wherever possible, perhaps primarily due to his undeniable leadership qualities, but it’s been apparent that for a number of weeks now the displays simply haven’t matched the faith.

Forever seemingly on a return from a niggle or illness, as against Leicester in the League Cup, the captain needs a run of rich health, and perhaps a couple of confidence-boosting performances, in order to influence the business end of the season in the way we all know he is capable.

HENRY: Anyone who knows me, whether personally or on social media, knows that I am a huge Henderson fan.

I’m not blind to this clear dropoff, though, and his current form is an undoubted concern.

He hasn’t looked himself for a fair while, barring the odd big display – he was unreal at Everton – and it does feel as though he is a player who has peaked.

Henderson turns 32 this summer, so that is no massive surprise, but there now have to be question marks about him being part of Liverpool’s ‘best’ XI. I wouldn’t play him at Inter Milan in midweek.

That’s not to say the skipper doesn’t remain a key squad player who will be around for a while yet, but his influence has waned and he is a combination of heavy-legged and wasteful at the moment.

MATT: He hasn’t played remotely well since the derby now as far as I can recall. So it’s far from just some bad form.

He was, though, rushed back quite soon against Burnley. It seems like he needs a game or two out to build back fitness and take a proper rest.

Do you start him in Milan? If not, there’s plenty of options. But it’s your captain, in the San Siro, in the Champions League. Tough call!

He’s 32 this summer, but now on a sizeable contract until his 35th birthday. I’m not sure how he’ll be playing regularly in those final years.