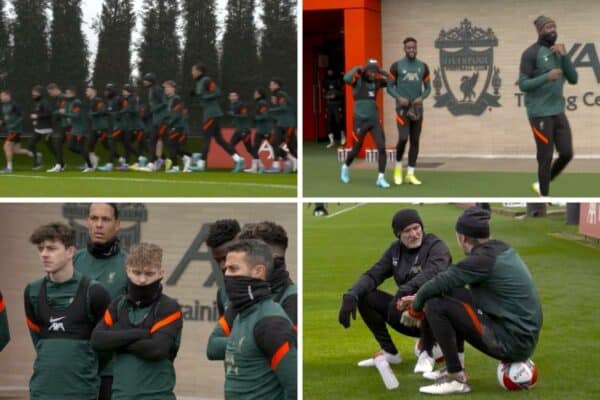 Thiago and Divock Origi both took part in Liverpool’s training session on Friday as Jurgen Klopp‘s list of options continues to grow in a welcome rare luxury.

The Reds have not enjoyed the best of luck with injuries and Covid in recent times, but heading into a decisive month, Liverpool could not be better positioned.

Harvey Elliott is firmly back in the fray and will “definitely” be in the squad to face Cardiff on Sunday, with Klopp and co. to decide “what is right for him” in terms of involvement.

After more than four months on the sidelines, it has been a long time coming for the 18-year-old and a start at Anfield is certainly not out of the reckoning.

Thiago, meanwhile, joined in with his teammates as Klopp had anticipated after a minor setback in the form of a chest infection, meaning he could be one to start from the bench in the FA Cup tie.

While Origi was similarly put through his paces, his seven weeks out with a knee issue means he will likely have to wait for his 11th appearance of the season.

Notably, Alisson and Fabinho were not pictured with their teammates but there should be no alarm as they are likely to have been given time off following their international exploits.

Joe Gomez and Alex Oxlade-Chamberlain also failed to be spotted on Friday but could be following an individually tailored programme.

New signing Luis Diaz was in the building but took part in an individual session on his first day as he adjusts to his new surroundings before joining in with the group, likely on Saturday.

The Colombia international provides the manager with another option having not ruled out a debut against Cardiff, with Naby Keita also back and ready to hit the ground running after AFCON.

It all leaves Liverpool in a strong and enviable position but now it is time to do the talking on the pitch once more and to hopefully keep players away from the treatment room.

Liverpool players in training on Friday