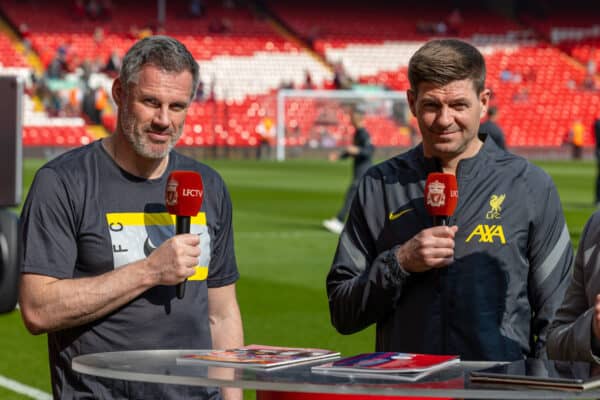 Jamie Carragher has joked that he and Steven Gerrard have “spoke about” the prospect of Aston Villa doing Liverpool a favour on their final-day trip to Man City.

Villa head to the Etihad for their last game of the Premier League season, and it could be a decisive fixture if both Liverpool and City keep up the title pace.

With nine games left to play, the two rivals have a point to separate them at the top of the table, with the Reds heading to Manchester for an all-important clash on April 10.

There is a chance, however, that it goes down to the final day, and there would be a sense of romanticism if that is the case, with Gerrard leading his Villa side to the Etihad.

Carragher and Gerrard, two of the most legendary figures in the club’s history, were unable to clinch a league title during their long spell together at Liverpool – which will be an ongoing disappointment.

But as they joined each other for an interview with LFCTV ahead of the Legends friendly against Barcelona on Saturday, the Villa manager was asked if he would “do us a favour” in May.

“We spoke about that!” Carragher joked in response.

That Gerrard was able to turn out for the Liverpool Legends, given his new ties with a fellow Premier League side, came as something of a surprise in the days leading up to the sell-out Anfield tie.

But the lure of playing in front of the fans, meeting up with old team-mates and raising money for the LFC Foundation was too big to turn down.

“The first respect for me was to speak to Aston Villa about that, and credit to them, they had no issue with it at all,” Gerrard explained.

“These opportunities only come up every so often, to come back, and – not with Jamie, because he’s local, I see a bit more of Jamie – the foreign lads that come over, to have the chance to mix with them, to have a kickabout.

“And also to do my bit for the city as well, to come here and help with the charity, the foundation, that’s the main thing.

“They’re the reasons why I’m here.”

Gerrard scored the opening goal at Anfield on Saturday, but Liverpool ended the game with a 2-1 defeat after Giovanni and Rivaldo turned the tide for Barcelona.