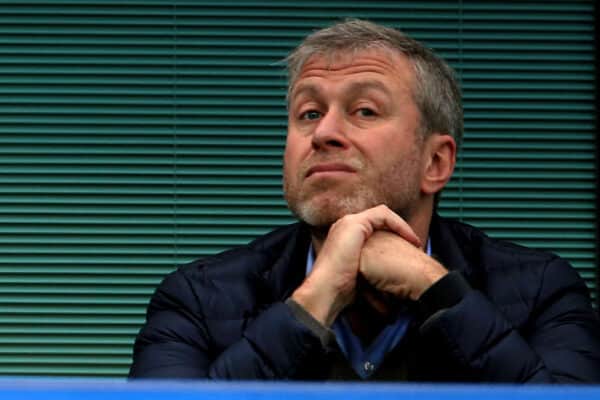 Chelsea given transfer, contract and ticket ban as part of Roman Abramovich sanctions

Roman Abramovich has been sanctioned by the UK government over his ties to Vladimir Putin, which includes a ban on transfers and contracts for Chelsea.

With Russia’s invasion of Ukraine ongoing and devastating, nations around the world are implementing measures to damage those considered allies to Putin.

Abramovich, who has backed and assisted Putin extensively throughout his reign, is among those to have been sanctioned in a new announcement on Thursday.

A government report explains: “[Abramovich] is associated with a person who is or has been involved in destabilising Ukraine and undermining and threatening the territorial integrity, sovereignty and independence of Ukraine, namely Vladimir Putin.”

The Chelsea owner’s “financial benefit” is related to holding a “close relationship for decades” with the Russian president, with Abramovich also receiving “preferential treatment and concessions from Putin.”

Among other sanctions, Abramovich has therefore seen his assets frozen – which includes Chelsea, though the club have been given special dispensation to continue operating in a footballing capacity.

Roman Abramovich sanctioned: what it means for Chelsea (https://t.co/VAamu5xDPm) pic.twitter.com/370kFU5CTH

But Chelsea are currently unable to sell tickets for any future games, with only season-ticket holders able to attend. This also means away fans will not be permitted.

Furthermore, as reported by the Times‘ Martyn Ziegler, Chelsea are no longer able to sign or sell players, agree new contracts or sell merchandise.

Abramovich had placed the London club up for sale, but a projected £3 billion deal can now only go ahead with government permission, with a source quoted: “He will not get a penny from the sale of the club.”

It remains to be seen how long the sanctions affect Chelsea – the current license expires on May 31 – though it is likely this will be extended for the entire period Abramovich is in place as owner.

Chelsea were almost certainly planning for a number of transfers in the summer window, with sales for the likes of Timo Werner, Christian Pulisic, Ross Barkley and potentially even Romelu Lukaku considered.

Cesar Azpilicueta, Antonio Rudiger and Andreas Christensen are all out of contract in the summer, and while Chelsea were reported to be seeking extensions for all three, that is now much less likely to happen.

Liverpool have already played Chelsea three times this season, including last month’s League Cup final, but could still be drawn against the Blues in later rounds of the Champions League or FA Cup.