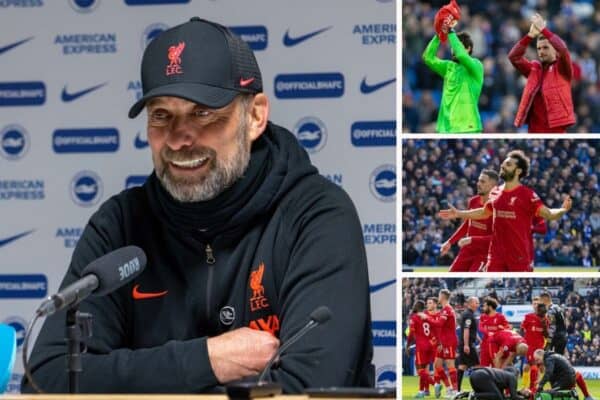 Jurgen Klopp was more than content to leave Brighton with a 2-0 win as he praised Luis Diaz once more and offered an update over Mo Salah.

Here are four key points from Klopp after his side’s latest victory:

It’s a rarity to see Salah on the turf for any length of time and after scoring the penalty, it was a worrying sight as he grabbed at his calf.

There is further assessment needed but Klopp was hopeful with Salah himself “not concerned”:

“He got blocked before the penalty when he shot the ball, overstretched his foot slightly and felt it a bit higher [on his calf].

“He is not concerned but I’m not sure what that means exactly. As we know, Mo is not often injured and I hope it stays like this.

“He thinks it will be fine but he felt something and you could see he couldn’t walk properly, he needs further assessment.”

Ali shouldn’t need to be world-class every game

It was a relatively comfortable afternoon for Liverpool on the south coast, but Alisson was called into the contest late on, with one particular impressive quick reaction save.

But it should not have to be the case that he rises to the fore every game.

“In the last few minutes they had a chance that was too big. Ali is a world-class goalie, but from my understanding he should not show this in each game,” Klopp said.

“Should not have to show it in each game. But he did and that’s good and that’s why we have a clean sheet.”

He’s a much-talked about player and rightly so, settling into this Liverpool side with what looks from the outside with relative ease.

And after another influential display, Klopp was, of course, asked about the No. 23 and had more words of praise for him as a player and a person.

“He’s a very good player, let me say it like this. We don’t have groups in our team, but we have a few guys who speak Spanish and Portuguese and that helps Luis a lot.

“They take him under their wing, very experienced players like Thiago, Fab, Bobby, Diogo – they are all really close to him and that helps.

“In general, he’s a really nice kid. And I’m not sure how Harvey Elliott and Luis talk but they are quite a lot together, that means the boy has settled as quick as the player.”

‘Can’t say anything’ about Sanchez

There was an overwhelming consensus that Robert Sanchez ought to be sent off for his reckless challenge on Diaz, well, everyone but the officials.

As for Klopp, he admitted he was not best positioned to deliver a verdict.

“Unfortunately I cannot say anything about it, I saw it once. I don’t know it it was a red card or not, but it is a very good example for VAR – for the issues we still have.

“Great goal, top goal and Mike Dean, how it should be on the pitch, probably sees the goal and may be does not think about the red card because he knows VAR is there.

“Now we have the problem with clear and obvious, this phrase is the problem.”