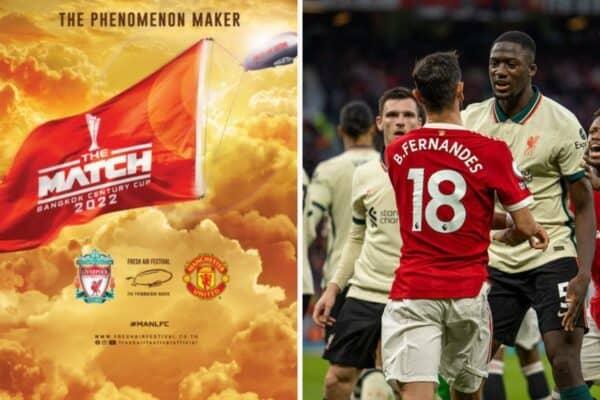 Date set for Liverpool vs. Man United pre-season in Bangkok

Liverpool’s pre-season plans have been known to include a possible trip to the Far East and tournament organisers look to have confirmed a date for a friendly against Man United.

Pre-season tours have been placed on the backburner since the start of the pandemic, with Liverpool last galavanting in 2019 when they visited the United States.

But with restrictions easing in most parts of the world, pre-season tours are back on the agenda and in February it was reported that Bangkok, the capital of Thailand, could host Liverpool.

With concerns over new variants of Covid, a date or plans were not locked in. But now, organisers of Liverpool’s friendly with Man United look to have confirmed the pre-season friendly.

Fresh Air Festival have advertised the clash they are calling, ‘THE MATCH Bangkok Century Cup 2022’, ahead of a press conference that will see Phil Babb represent Liverpool and Andy Cole for United.

A date that is a little more than three weeks before the start of the 2022/23 Premier League season.

It is expected that the pre-season friendly will take place at the Rajamangala National Stadium in central Bangkok, having seen representatives from both clubs fly out for an inspection earlier in the year.

Current quarantine rules allows fully vaccinated travellers from any country to enter Thailand without quarantine, with a negative test on the first and fifth day required.

Liverpool last travelled to the Far East in 2017, when they lifted the Premier League Asia Trophy in Hong Kong, beating Crystal Palace and Leicester, and the last time in Thailand was in 2015.

It is expected to be only one part of Liverpool’s pre-season plans, with Jurgen Klopp known to prefer an extended training camp that has previously seen the squad travel to Austria and France.