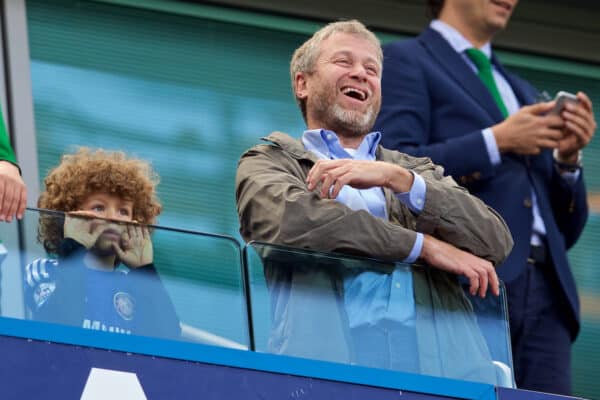 March 2021 saw FSG confirm a deal that handed RedBird Capital Partners a 11 percent stake into their ownership group, which was valued at the time at £5.32 billion.

RedBird were founded by Gerry Cardinale, and have ties to LeBron James and Billy Beane, with their portfolio planned to include further investment into European football.

In July, they acquired Ligue 2 club Toulouse with an 85 percent stake, while they are reported to have also sealed a minority stake in Spanish Segunda Division side Malaga.

Now, ESPN‘s Mark Ogden claims RedBird are one of 10 “credible buyers” for Liverpool’s Premier League rivals Chelsea, who have been put up for sale by Roman Abramovich.

Abramovich has looked to sever ties with Chelsea in response to Russia’s invasion of Ukraine, with a £3 billion price tag set.

Ogden writes that RedBird are “one of a number of US-based groups assessing the feasibility of a bid,” with Chelsea already having received “more than 300” expressions of interest.

Naturally, many of those are fanciful, such as UFC fighter Conor McGregor’s claim he would “explore” the possibility of a takeover, but Ogden names Todd Boehly, part-owner of the LA Dodgers and LA Lakers, among the interested parties.

If RedBird were to acquire Chelsea, however, they would be required to relinquish their investment into FSG due to regulations over ownership.

At present, Cardinale’s group have invested into FSG, rather than Liverpool, and the decision-making at Anfield still rests with principal owner John W. Henry and chairman Tom Werner, along with president Mike Gordon.

But it would make the situation more interesting, with American investment into Chelsea perhaps intensifying the ongoing rivalry between the two clubs.