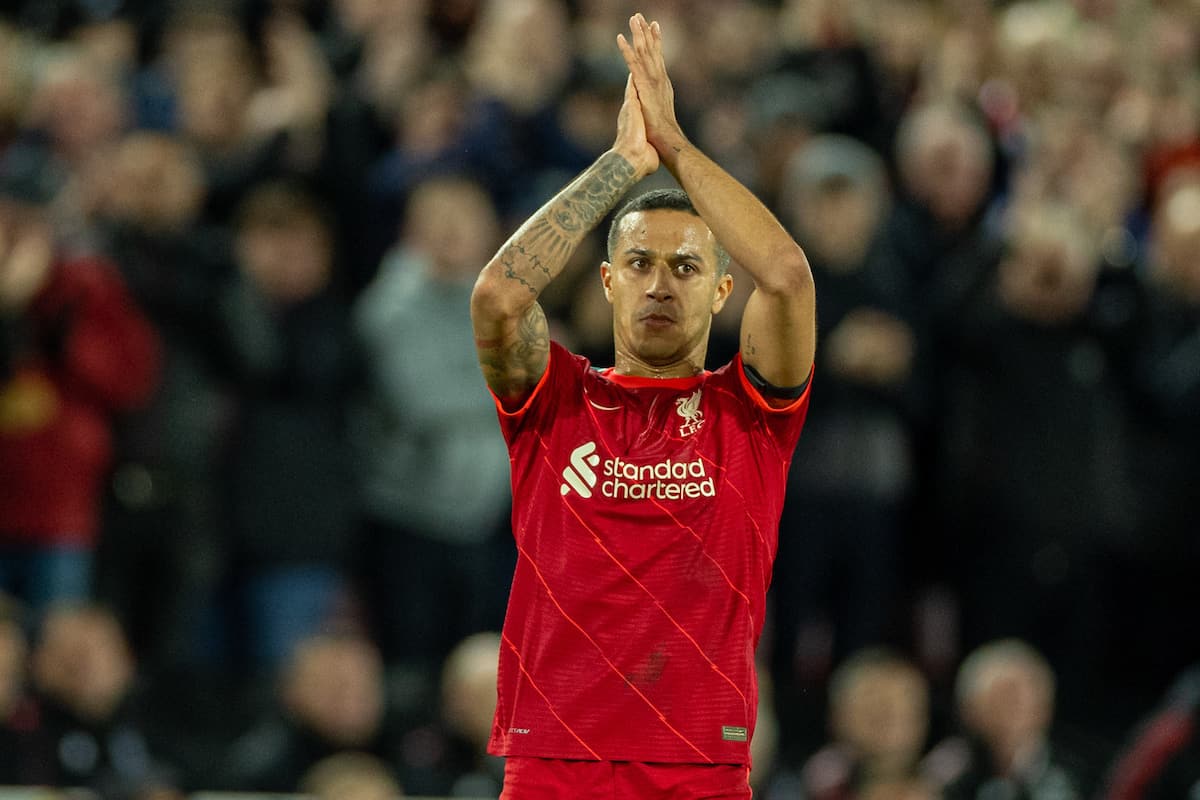 Liverpool strutted their way to a superb 4-0 win at home to Man United on Tuesday night, going top of the Premier League in style as Thiago shone.

The Reds faced their biggest rivals and were hot favourites to beat them, on another huge occasion in the title race.

It was a flying start for the hosts, with Luis Diaz firing home an early opener, before Mohamed Salah finished off a magnificent move soon after.

Sadio Mane made it 3-0 midway through the second half after a slightly tense spell, and then Salah scored another, sealing a massive victory and sending Liverpool top of the league.

A glorious victory left many delighted, not least the fact it was United…

Sensational. A lazy 15 minutes in the second-half aside, that was a more dominant performance than the win at Old Trafford. Over to you, sports-washers.

Liverpool have just beaten United 4-0 and it’s not their best result against them this season.

What a time to be alive, my friends.

The gulf in class was so great there, it's actually a travesty that they got nil

TOP OF THE LEAGUE LADS.

I'm pretty sure I dreamt a 9-0 season double over Manchester United when I was a young lad.

Another brilliant performance from this team. Energetic, relentless, and ruthless. Mane, Salah and Diaz all superb. Thiago MOTM. Top of the league ??

Thiago did not want to leave that football pitch tonight and no wonder why. It’s just getting better and better. These days ??

Thiago is a cheat code ?

Thiago's pass accuracy was 92% on Saturday. Today it was 96%. Incredible.

Watching Thiago here feels like some kind of spiritual experience.

Absolute class by Liverpool, I guess it went as expected but very professionally done. Such a joy to watch

Thiago motm but so many good performances across the pitch.

Others were also hailed…

How good has Robertson been tonight! Unreal energy.

Mane, Salah and Diaz all have a goal and an assist pic.twitter.com/0DMOwgK5Is

Robertson been unreal here. So much energy.

Jota on, Diaz off.
The Colombian gets a thunderous ovation. Another brilliant display from him.

Despite being with Senegal at AFCON between January 10th and February 6th, missing seven games, Sadio Mané has been involved in 20 percent of Liverpool's goals in 2022.

It’s over to you, Man City…

City are under so much pressure , better believe

Top of the table at least for now. Let's hope City loses or draws against Brighton tomorrow. Up the Reds??#LFC #YNWA

I tell you, we are so good to watch when we’re on it. This is an era I don’t ever want to end. What a superb result, pressure is now on City! #LIVMUN #LFC #NorthWestDerby