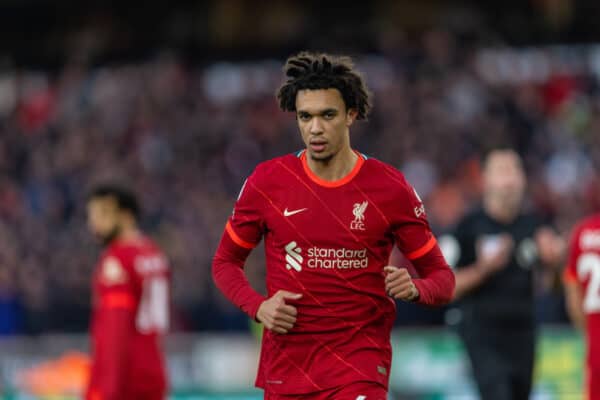 Trent Alexander-Arnold produced his 45th assist in the Premier League in Sunday’s 2-2 draw with Man City, and in doing so completed the top-flight set.

The right-back endured a sloppy start at the Etihad, but was heavily involved in the move that set up Diogo Jota‘s equaliser at 1-1.

Picking up Thiago‘s raking ball, Alexander-Arnold kickstarted a flowing piece of play that ended with him touching it down for Jota to sweep home, showcasing his composure in big games.

It was the 23-year-old’s 45th assist in the league, moving him clear of Graeme Le Saux (44), with only two other specialist defenders – Andy Robertson (49) and Leighton Baines (53) – setting up more in the history of the Premier League.

Remarkably, according to Opta, no other player has assisted more Premier League goals since the start of 2018/19 than Alexander-Arnold (44).

44 – Since the start of 2018-19, Trent Alexander-Arnold has assisted more Premier League goals than any other player (44). His assist for Diogo Jota today means he has now set up at least one goal against all other 19 current Premier League sides. Unstoppable. pic.twitter.com/kiVtJFUJQz

He is one off equalling his best-ever tally of assists in the league (13) with seven games to play, and on Sunday, he recorded his first-ever assist against Man City.

In doing so, Alexander-Arnold has now assisted at least one goal against all 19 opposing sides currently in the Premier League.

Liverpool’s No. 66 has also teed up goals against the two top sides in the Championship – Fulham and Bournemouth – assisting against 24 different clubs in total in the league.

Arsenal are his favourite opponent, with Alexander-Arnold setting up five in the league and seven overall against the Gunners, with West Ham second with four.

Jota is the second-most frequent scorer from the right-back’s deliveries (nine), despite only joining Liverpool in 2020.