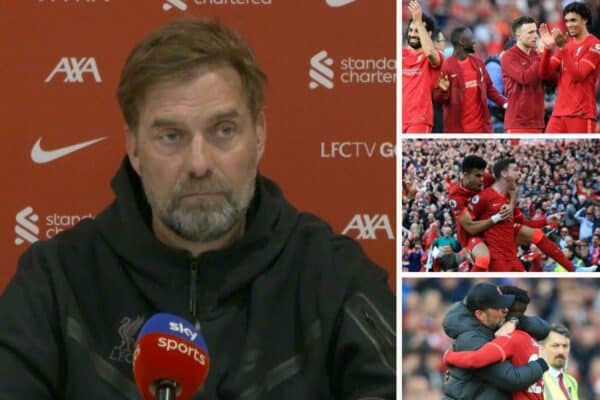 Jurgen Klopp was full of praise for the “legend” Divock Origi after Liverpool’s 2-0 win over Everton, as he revealed the half-time intervention made at Anfield.

Here are all the key points from Klopp’s post-match press conference.

What happened at half-time

“We were not really good in the first half, I can admit easily because it was obvious,” Klopp conceded.

“But that was not good and good in the same moment, because then if there’s half-time and it’s 0-0 you have a good chance to improve with simple messages.”

The manager was clearly frustrated with Everton‘s approach in the opening 45 minutes, and the lack of creativity from his side against a low block.

Klopp ran down the tunnel on the referee’s whistle, and in his press conference revealed what Liverpool’s analysts put together to help inspire an improvement.

“We showed, actually, one situation and stopped it eight times and showed what we could do differently in specific moments,” he explained.

He added: “So we improved, and then we thought with the changes we made we can give them another task to deal with.”

While Liverpool were arguably better immediately after the break, it became apparent than changes were required to inject more impetus into the side.

That came with Luis Diaz and Origi replacing Naby Keita and Sadio Mane, with the incoming pair involved in the two goals.

“That is what substitutions should do,” Klopp said.

“We are really happy with the impact, this season to be honest, when the boys come on. That is all about the right mindset, being ready, all three subs.

“Hendo came on late, but how he showed up was absolutely exceptional, and obviously, Luis and Divock were involved in the goals.

“That helps most, obviously, in a football game, especially when you play against such a low block.”

It would not have been a Merseyside derby without a big moment from Origi, who scored in what is likely his last game in this fixture.

“He’s a legend on and off the pitch I have to say, that’s how it is,” Klopp enthused.

“He is a fantastic footballer. For me – and I know it sounds ridiculous because I don’t line him up often – he’s a world-class striker.

The manager concluded: “Everybody loves Div, and rightly so. He was, again, very decisive and I’m very, very happy for him.”