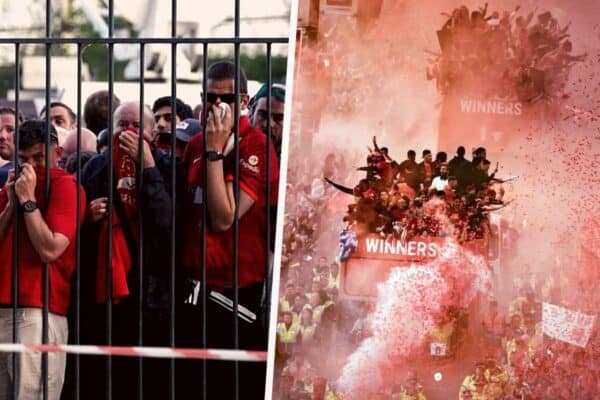 The contrast could not be starker, where Paris on Saturday was moody and hostile, Liverpool on Sunday was joyous and welcoming.

For every steel cordon erected by the French authorities, the people of Liverpool created a vast wave of emotion and love. We had turned up in our tens of thousands for a festival of football, the Parisienne police turned up for a fight.

It began as such trips always do, with hope, excitement and laughter. In Liverpool on Sunday, it would end the way it began with love and camaraderie, but sandwiched in between, the experience for thousands could not have been further removed. One day I’ll write about the journey that began on Friday, but for now, the jokes and the stories and the challenges of getting there are lost in anger and hurt.

Five of us went, only three had tickets, but all of us were desperate to be part of the story, to be around the action and to sample the atmosphere. The journey would be convoluted, in the back of a van to Dover, then a ferry to Dunkerque followed by a train ride to Paris. Being a football supporter can be hard work, getting to finals is like a full-time job, and today I’m wondering why it should be that way?

Why don’t those who preside over the game and profit from it not cherish us? Why don’t they move heaven and earth to make it easier for us to support our team and experience the games’ greatest moments? Why is it so difficult and so expensive, why are we still, in 2022, herded like cattle, corralled beneath underpasses in 22-degree heat without water for 90 minutes, then tear-gassed and beaten, our tickets robbed and ultimately left outside the game we love?

Does any other industry treat its lifeblood this way? Are theatregoers or spectators of any other sport handled with a disdain bordering on loathing in the way football supporters are? Long before the debacle in Saint-Denis we had seen tickets hived off to corporate interests and sold on at extortionate rates, we arrived on the south coast to tales of planes and ferry cancellations, and supporters who’d shelled out a few month’s salary to get to the game now left high and dry. This doesn’t happen unless the sports governing body and the opportunist spivs who leach off it see us as little more than a cash cow.

Nevertheless, we keep coming back for more, because it is us who truly love the game for what it is. Football brings people together in a way few other games can, people of all races, ethnicities, religions and cultures. It is filled with beautiful moments, passion, pain and pure euphoria. This is how I see the game, those who owned it and control it see gold, lots of gold. I get the feeling they suffer us, barely tolerating our existence so long as we keep filling their coffers, but to the Paris police, the stewards at the Stade de France, and it seems to UEFA, we are expendable.

“The fans arrived without tickets,” they said. “They arrived late, and they forced their way in,” they said. Where have we heard that before? The speed at which these lies were parroted without question is both remarkable and depressing. The fact that so many “rivals” were willing to lap them up and repeat them was predictable and sad.

Within moments of the problems occurring outside the stadium, I was sat in a bar in Gare du Lyon, waiting to watch the match and receiving text messages about crushing at the turnstiles, fans climbing over fences and “trouble” at the match. My blood turned cold, my son and three of the lads I’d travelled with were at the game.

We’d been in and around the fan park earlier that day, soaking up the sun, after walking along the Seinne and having a beer near the Pont Alexandre III. We’d posed for pictures with a group of Italians from Bergamo. Incredibly they were wearing Norwich City shirts and to our amazement, they were a delegation from the Canaries’ Italian supporters club on their relegation party weekend. We laughed together and shook hands.

We mingled without incident with Madrid fans along the Champs Elysees and marvelled together at the Arch de Triomphe, then onto Cours de Vincennes for the Boss do. The place was already rammed when we got there and our attempts to join the party were hampered by a ring of steel encircling the park, interspersed with armed police who looked more geared up for a riot than to protect the public attending what amounted to a festival.

Eventually, we were able to share a few beers in the sunshine and pyro, marvel at the banners on show and drink in the atmosphere of yet another European Cup final with the Reds. It was like a carnival, smiles, laughter and song everywhere. If the police had studied what we were really about that day, they couldn’t possibly have seen us as a threat. We were there to support our team and enjoy their city. We would later agree that had we properly taken in their demeanour that day, we probably could have predicted how they would behave later.

The truth is, they policed the supporters they were expecting, not the people who actually turned up. Their expectations were fuelled by prejudice and bias, and a deep-seated mistrust of football fans. They got it horribly wrong, and their bias prevented them from changing tact when their plan went awry. Where have we seen that before? Those supporters of other clubs pedalling tired old tropes and stereotypes beware, you’re only fuelling the same prejudice that led to these horrible scenes outside the ground. It could easily have been you, and somewhere down the line, it will be.

My friends and my son left us at around 4pm that afternoon. They would be in the queue outside the stadium for several hours before the game. They did as they were told and they had genuine tickets. They had little idea what lay in wait for them.

A friend and I decided to enjoy Jamie Webster for an hour and then sort a quieter environment to watch the game, meeting up with a couple of other mates in Gare du Lyon. When the text messages came through, I instinctively contacted my son, “Did you get in, mate? Are you ok?” His reply almost broke my heart.

He’s 26 and this is now his second European final. He has experienced the joy of Madrid, countless European away days, and has travelled to Wembley many times now. In Paris, he spoke of seeing a young lad assaulted by police, and fans being tear-gassed. His ticket had been confiscated and he was told it was fake. It wasn’t. He was with two other lads, one of whom actually made it into the ground. When he arrived at the seats, he was confronted by three French locals who had no tickets. But at least they were now safe, and I was glad of that.

My three friends had made it into the ground, but had experienced horrendous treatment outside, kettled into a narrow underpass, tear-gassed and scared for their safety. They weren’t late, they had tickets, they followed instructions, and they were only going to a bloody football match!

The result of the game was a bitter disappointment, but it is meaningless in the grand scheme of things. I’ve seen posts from mates and other fans saying they’re finished with football. On the journey back all of us said we would never go to another final again. My son described the behaviour of police and stewards as “bordering on callous.” All this at a football match, a sporting event in which our only crime is wanting to see our team in a major final.

The journey home was the polar opposite of our outbound adventure. None of us could get angry at the result. Instead it was events off the field of play that consumed us. I’m grateful to the journalists and broadcasters who immediately told the truth, countering the lies fed to them by the police, the French government and UEFA, we didn’t have that in 1989. But what lifted me most were the pictures and video from the parade in Liverpool.

What happened in Liverpool, after the events in Paris, was nothing short of a miracle. To see vast swathes of red lining the streets to welcome home a defeated team was like food for the soul, it was a great big hug, and it reminded me that there is really no place like Liverpool. If only the authorities and football’s governing bodies could see us for who we really are.

This really was a tale of two cities. Where the Paris police and stewards had shown hostility and disdain, my home town had shown love and loyalty. On Sunday, the city of Liverpool handled half-a-million people safely and without incident. By Monday morning, its streets were clean and gleaming once more. Paris – and UEFA – are pouring over the aftermath of incompetence and failure, Liverpool is looking forward with renewed hope and energy.

Paris can learn a lot from Liverpool.