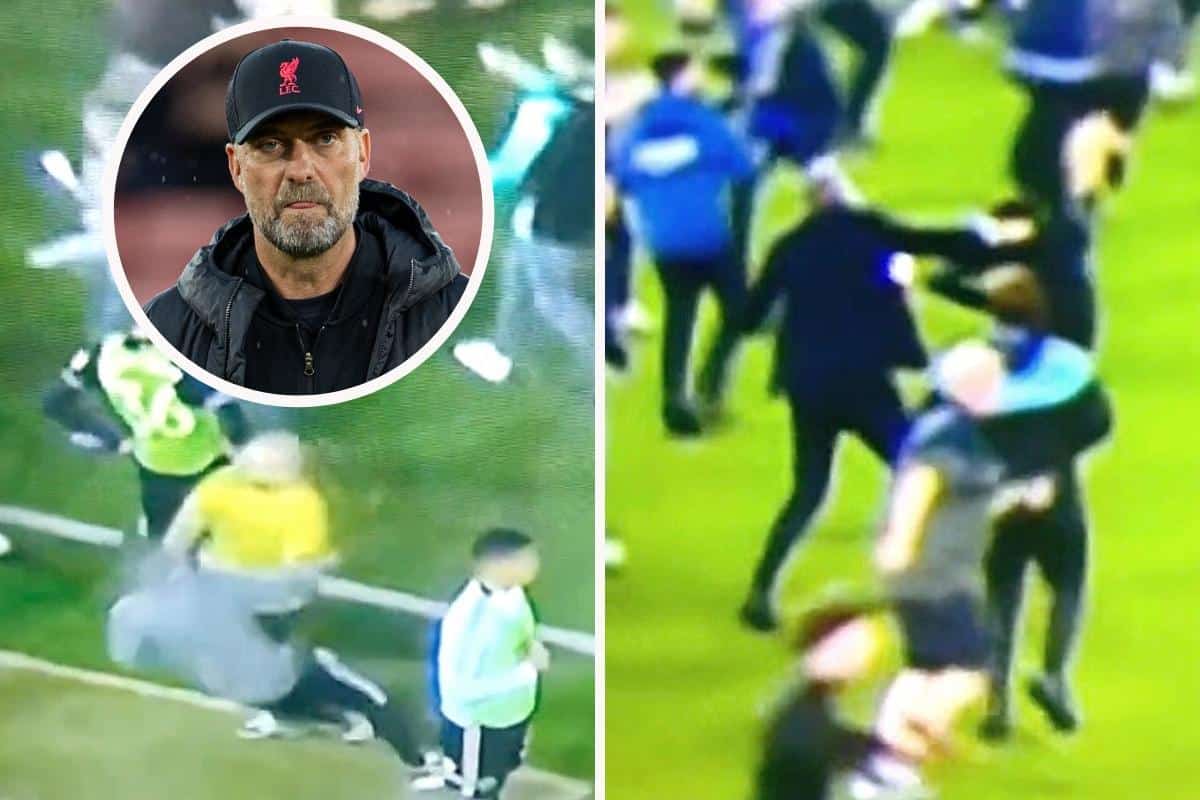 Jurgen Klopp has questioned the supporters involved in pitch invasions across English football, describing it as “dangerous” for players and the fans themselves.

As the season reaches its climax, a number of games throughout the English football pyramid have ended with thousands of fans invading the pitch in celebration.

Incidents have taken place at Everton, Nottingham Forest, Port Vale and Northampton in the past week, with some fans confronting rival players and managers.

Ugly scenes at the City Ground saw one Forest supporter headbutt Sheffield United’s Billy Sharp, resulting in a 24-week jail sentence, while Crystal Palace manager Patrick Vieira was filmed kicking out at an Everton fan after an altercation at Goodison Park.

Everton‘s 3-2 win over Palace guaranteed safety from relegation, and fans had already got onto the pitch before the final whistle was blown, with Klopp among the managers reacting to this spate of invasions.

“[In the] 83rd minute, when I saw fathers with little sons on the pitch, I thought ‘I’m not 100 percent sure what you are thinking’,” he said on Friday.

Patrick Vieira has been filmed in an altercation with an Everton fan on the pitch at Goodison Park during tonight’s pitch invasion. pic.twitter.com/MOliWvsSHJ

“Because if the other thousands were there as well, that could have been really dangerous.

“After the game, I’m not sure how you can avoid that. It’s really difficult to really judge it.

“I understand the emotions, but it’s, for the players of the other team especially, massively uncomfortable.

“It should not be dangerous for them.

“So these are things where people cannot hold themselves back, like the two guys obviously in the last two games. They should for sure not be there.

“But – it’s always like this – two things happen now and I hope we learn from that.

“I’m not sure it’s a nice picture, but it’s just like it is. We should make sure that nothing – absolutely nothing – happens.

“People threaten themselves by jumping over whatever, these kinds of things should not happen.

“I think we can celebrate things without threatening ourselves and the opponent.

“I would say that should be possible. We will see.”

An FA statement on Friday confirmed that investigations were taking place into recent pitch invasions, along with a review of current regulations around anti-social behaviour.