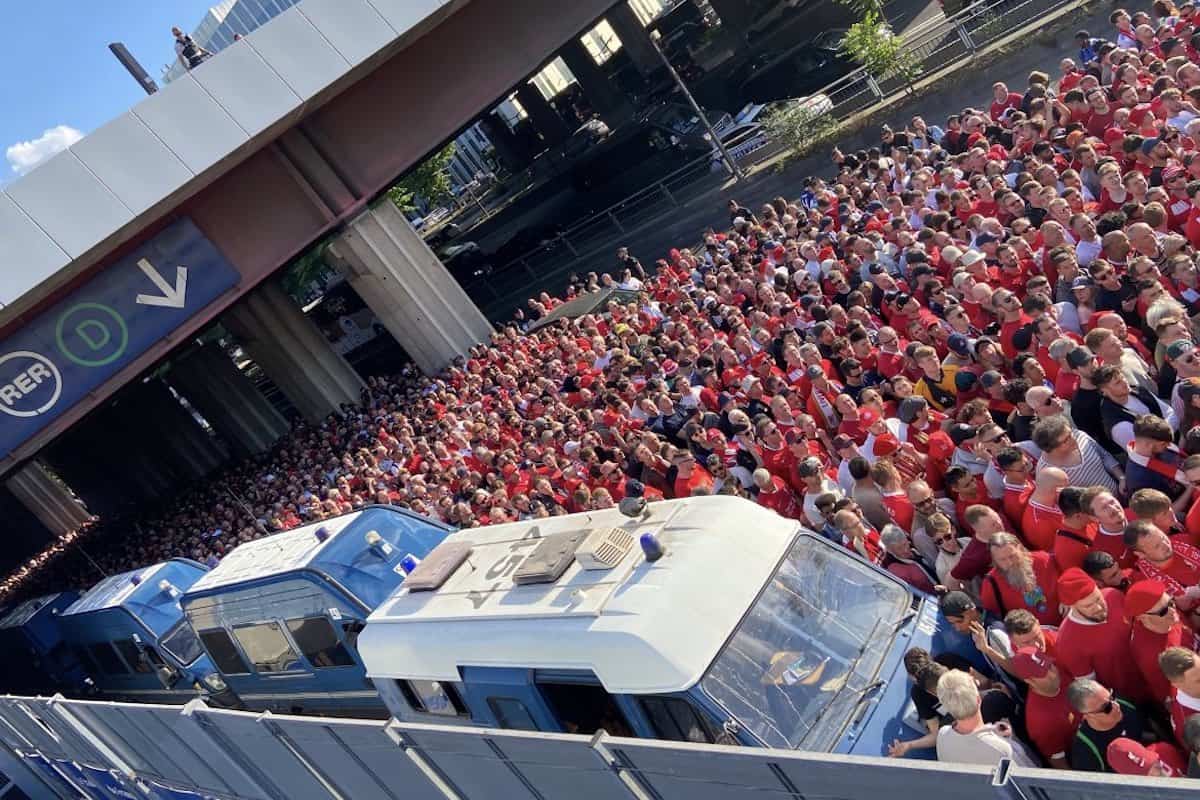 With the Champions League final delayed due to thousands of Liverpool fans being locked out of the ground, UEFA have claimed it was due to “late arrivals.”

Thousands of supporters remained stuck outside the Stade de France as 9pm ticked by in Paris, with kickoff in the Champions League final delayed by at least 30 minutes.

An announcement from UEFA claimed the decision to delay was “due to the late arrival of fans at the stadium.”

But from around 6.30pm local time, a full two-and-a-half hours before the scheduled kickoff, Liverpool fans took to social media to report on unrest outside the stadium.

Absolutely disgraceful organisation from UEFA. Sadly it comes as no surprise. pic.twitter.com/Dpy3YcDDVD

Absolutely shambolic at the Stade de France. No way in, no way of knowing which way to go. Stay safe if you’re heading in ??
It has the potential to be very dangerous.

Absolute disgrace outside the ground. Crush like you wouldn’t believe. Thug guards who took me round the neck because I was being pushed and they thought it was me. Absolutely grim. pic.twitter.com/RZDuEMQ1Bl

Sad to relate it’s chaos outside, police funelling fans into dangerously narrow routes – because their fans are parked blocking the pavement. Dangerous crush building up behind… pic.twitter.com/Rqzt90MCdn

Relieved to be out of that. Police checks just beyond narrow underpasses made tighter by presence of vans unnecessarily. Crowd very patient but was becoming tense. I was there two hours and twenty minutes before kick off, like a huge number of people. Only getting in now. pic.twitter.com/ApMy9Slf8q

“little”, the gates are shut and it’s bordering a crowd surge, it’s a huge failure https://t.co/rRmHgORE1I

Closed gate for no reason. No explanation from stewards. Can’t get in at any other gates.

European cup final, with tickets costing up to £550. pic.twitter.com/5UwAA2c0tl

Fans queuing outside with tickets for a gate that’s been shut for no reason just been tear gassed. Throughly unpleasant experience and so dangerous. This isn’t how fans should be treated in a civilised society. Unacceptable

A shambles of disorganisation has led to fans being funnelled through tight walkways, gates closed with no sign of entry and even teargas being deployed on growing crowds.

To claim that the delay came as a result of “late arrivals” is an utter lie, and Peter Moore, former chief executive of Liverpool, admonished UEFA for this:

Disgraceful scenes outside the stadium. “Late arrival of fans” should read “horrendous organization”. Fans have been here for hours. Stadium operations incapable of managing flow and access. Victim blaming at its very best…

“Fans have been here for hours. Stadium operations incapable of managing flow and access. Victim blaming at its very best…”

They’ve just announced another 15 minute delay “because of the late arrival of fans”. Utter bullshit.

It is a farcical situation that is becoming increasingly common around major European games across the continent, with similar scenes unfolding with Rangers fans at the Europa League final in Seville.

the Madrid fans storming the ONE AND ONLY GATE that they had open while I was at the front. Lads all fighting.

Police pushing back the crowds they trapped and literally crushing people inside.

On such a significant occasion for Liverpool and their supporters, it is a harrowing reminder of tragedies of the past, with further claims from fans of crushes, fights and incidents with riot police outside the Stade de France.