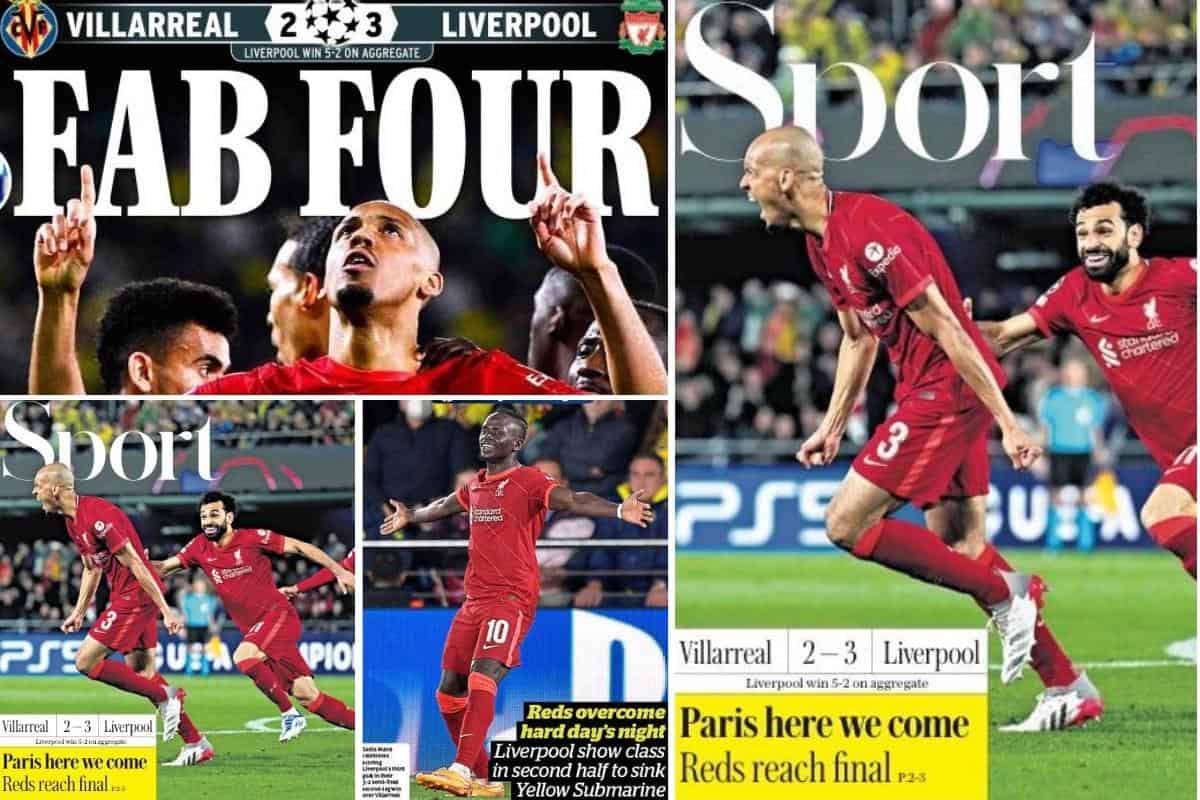 The watching media revelled in Liverpool reaching the Champions League final on Tuesday evening, on a topsy-turvy night at Villarreal.

The Reds found themselves 2-0 down at half-time after a dire 45 minutes at El Madrigal, meaning the score was 2-2 on aggregate.

Jurgen Klopp went up a gear in the second half, however, as goals from Fabinho, Luis Diaz and Sadio Mane sealed a memorable 3-2 win on the night and 5-2 over two legs.

Here’s a look at how the media reacted to the Reds’ progress to Paris.

Liverpool showed their class in the second half… 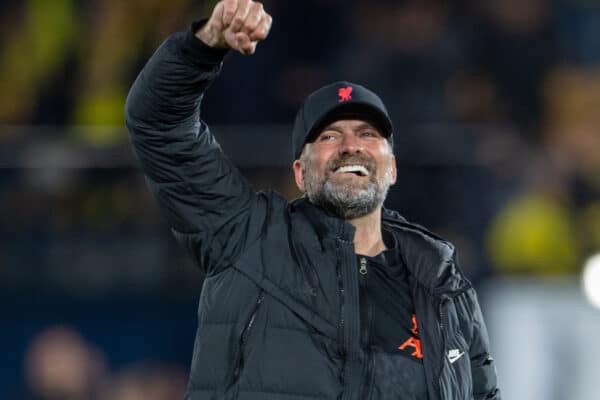 Miguel Delaney of the Independent focused on how the Reds raised the game:

“Liverpool do what everyone expected – but in the most unexpected way. The club cruised to a 10th Champions League final, and a second in Paris, having overcome genuine turbulence. That’s perhaps what going for a quadruple requires.

“It’s an achievement of such a monumental scale that there are always going to be ructions, and big challenges within. This semi-final second leg against Villarreal had looked the biggest Liverpool faced.

“At half-time, it wasn’t just the Champions League or the quadruple on the line, but perhaps the whole season given the potential effect of elimination.

“And what happened out of such anxiety and uncertainty? Liverpool just raised it, and ended up winning 3-2 on the night with ease.”

The Mirror‘s Colin Millar praised the manner in which Liverpool dug deep:

“Having been overwhelming favourites to progress at the start of the night, Liverpool had arguably their most concerning half of the season in the opening period as Villarreal rushed into a deserved two-goal lead.

“Yet, as they almost always do, the Reds roared back. Substitute Luis Diaz was the difference as the hosts ran out of steam and had no response to the visitors comeback.

“The Colombian headed home the second with goals from Fabinho and Mane either side. After their worst 45 minutes of the campaign, the second half was vintage Liverpool under Klopp.”

Martin Samuel of the Mail praised Klopp’s influence at half-time:

“For much of the night the locals dared to dream, and they appreciated their teams’ efforts even in defeat. Si! Se pueze! was the mood of the night, which translates as ‘Yes, we can’ and for a while Villarreal damn well did.

“But Liverpool are the better team, with the better players and their performance level to retrieve the match after half-time was quite fantastic. By the end, for all of Villarreal’s fight, Liverpool had actually furthered their first leg advantage to a 5-2 aggregate victory.

“It was impressive stuff, placed in sharper relief by the fact that Villarreal had showed they were anything but the Champions League pretenders claimed in some quarters. Once Jurgen Klopp got to his players, and once his players woke up to the alarming weakness of their first-half performance, it was a different tie.”

The majestic Diaz turned the tie around… 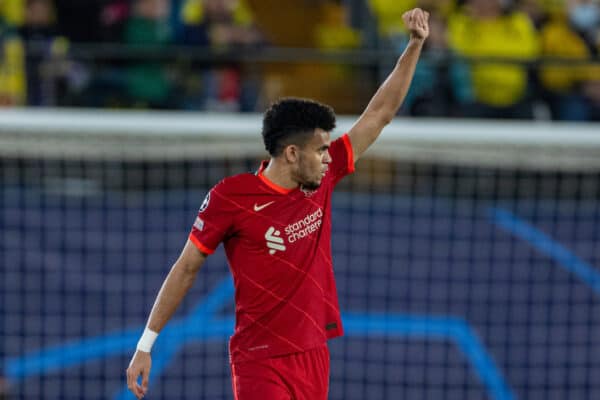 “It has been said before and it will be said again for sure, but let us say it now and let us say it loud. What a signing Luis Diaz is, and what a player he is going to be for Liverpool.

“He has only been here three months, but the Colombian has already made a huge impression at Anfield. You don’t get many £50 million bargains, but he’s most definitely one.

“And here, on the big stage, in the Spanish rain and with the Reds’ Champions League dreams hanging by a thread, it was he who stepped up and delivered.

This Is Anfield‘s Mark Delgado also showed his appreciation for Diaz:

“Our newest addition to the squad he might be, but he had proven it before and did so again: Luis Diaz should simply start every big game from this point.

“And given the season context, that means starting pretty much all the rest of the matches from now to the campaign’s end.

“There are obvious uses for Jota and it’s not a straight ‘Diaz or Jota’ conundrum; they can play together with Jota centrally, and we’ve seen Diaz be a wide right outlet too.

“But whatever his role, it has to be as starter whenever possible, particularly regarding the two cup finals we have coming up.

“He’s just electric: aggressive, strong, direct and capable of both scoring and creating.”

The Guardian‘s David Hytner described the No. 23 as “unplayable”:

“How Liverpool reasserted themselves after the interval, the catalyst being Klopp’s introduction of Luis Diaz on the left.

“The January signing was virtually unplayable. It was as if a switch had been flicked and, sadly, the lights went out on Villarreal’s erratic goalkeeper, Geronimo Rulli.

“He was beaten when Fabinho lashed in a shot from an angle, the ball seeming to go through him, which was a hammer blow for him and his team. And when he was beaten again when Diaz rose to head a Trent Alexander-Arnold through his legs, the die was cast.”

The Telegraph‘s Chris Bascombe believes the winger is a “game-changer”:

“It took less than a minute for Diaz to announce his arrival, his first touch giving him that admirable ability to consider where he is going to sprint before he has received possession.

“The dynamism and endeavour his team-mates had lacked before his arrival was evident with that first dash down the touchline, albeit there would be delay before it led to a meaningful chance. The message was sent to Villarreal. Their party was over. They would be on the backfoot for the rest of the evening.

“Liverpool have a new game-changer in Diaz. And not just in the 45 minutes which sunk the yellow submarines. In four months he has elevated a side 14 points off the pace in the Premier League to one which is now six games from immortality.”

Jones looked ahead to May 28 and a potentially season-defining game:

“They may have been given an almighty scare, but their quadruple bid is still on course. We now know that they will play every game they could possibly have played this season, 63 of them across four competitions.

“The last of those will be at the Stade de France on May 28, against either Real Madrid or Manchester City. Their third Champions League final in five seasons.

“And surely, it will feature the name of Luis Fernando Diaz Marulanda in the Reds’ starting line up.

“How could it not, after this?”

Liverpool legend Jamie Carragher took to Twitter to mock Man United and Everton fans who were no doubt excited at half-time:

The scene at ht in all households across Manchester & the blue side of Merseyside, the fume will be glorious ?? just the 10th #ChampionsLeague final for @LFC what a club! #VILLIV https://t.co/hxc1gkezu0

Finally, Delgado is still very much daring to dream, looking ahead to more huge games:

“It’s Spurs at the weekend and even if the odds are against the Reds winning the league now with Man City not slipping up at all, we’ve still got to keep the pressure on them by doing our job.

“Yet again we play before them – Saturday night, Sunday afternoon – so victory puts us top and means they’d have to do the same.

“Spurs are a side with their own fights still ongoing too, with a top-four spot up for grabs, so it’ll be anything but routine.

“There should rightly be celebrations, of course, with the Reds reaching a third European Cup final in just five seasons – though the immediate aftermath might also be mixed in with relief after that abysmal first half.