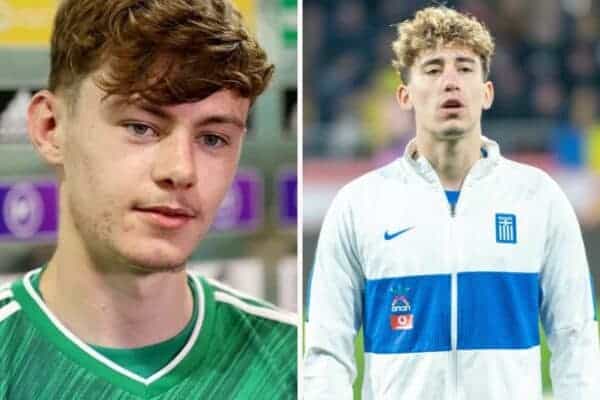 Two Liverpool full-backs faced off in the UEFA Nations League on Friday, while the toll of the campaign just gone saw caution taken with three more players.

As the international calendar resumes days after the end of the season for Liverpool, it is a difficult balancing act for national team coaches.

While many of those from Jurgen Klopp‘s squad are key players for their countries, those in the dugout are mindful of the overload on their bodies and the potential risk of injury.

Thiago has already pulled out of the Spain squad due to a muscle problem, and Thursday evening saw their 1-1 draw with Portugal played out with Diogo Jota on the sidelines.

Alvaro Morata’s first-half opener was cancelled out late on by Ricardo Horta, as Jota watched on from the stands having joined his team-mates late following the Champions League final.

Meanwhile, Alisson went unused as Brazil thrashed South Korea 5-1 in their friendly, with Fabinho coming on for the final 19 minutes in Seoul.

There was direct competition between two others in the UEFA Nations League, though – Kostas Tsimikas starting at left-back and Conor Bradley at right-back as Greece took on Northern Ireland.

It was a tough night for Bradley on his sixth outing for the senior side, with a late challenge on Tsimikas early in the first half his most notable contribution in a 62-minute showing.

Tsimikas played the full 90 in a 1-0 win for Greece – now managed by Gus Poyet – decided by Anastasios Bakasetas’ low effort into the bottom corner.

“It is a big learning curve for [our young players],” Niall McGinn, who replaced Bradley in the second half, told Belfast Live after the game.

“There are a lot of experienced boys here who play at a high level, such as Jonny [Evans] and [Steven Davis], so they are learning off the best.

“We have to bring them along and make sure they take their opportunities when they get them.”