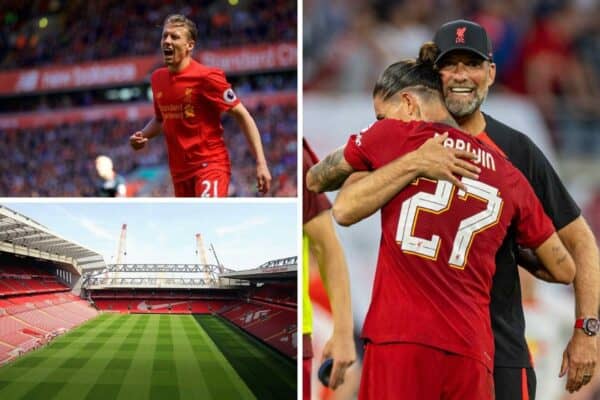 5 of our favourite Liverpool stories from this week

It’s been another busy week in the world of Liverpool FC as the club continued to train in England before moving on to Germany and Austria, while Anfield oversaw a huge development.

The Reds are ramping up their training as the season draws ever closer, but the happenings on the pitch are not the only focus for the club with loans, transfers and stadium expansions all on their agenda.

Jurgen Klopp‘s focus, though, is firmly on the most important part of pre-season to date, uninterrupted time with his team in Austria after a dominant win over RB Leipzig.

Here, we present our five favourite stories of the week gone by.

It has was a huge week for Anfield’s latest expansion as the 300-tonne ruff truss was lifted into place on Tuesday during what was the hottest day of the year so far.

Two 600-tonne cranes, operating at 164 meters high, were responsible for lifting the steel structure into place in what was an incredible feat of engineering.

It marks a significant step forward in the redevelopment of the stand, which will open in time for the start of the 2023/24 season.

The stand will be 39 metres high and hold an 7,000 extra seats, we can’t wait until it’s finished!

Didier Lallement, the chief of police for the Greater Paris region who ordered the horrific treatment of fans during the Champions League final, has now left his post.

Justice for what occurred in and around the Stade de France has yet to come from French authorities or UEFA and from what we’ve seen so far, it’s not going to be a quick process.

But one piece of news which is welcome is that Lallement, who served as Paris chief of police for more than three years, has now stepped down.

He has been continually criticised throughout his tenure for an authoritarian style of enforcement and innocent football fans unfortunately were on the receiving end of just that during the final.

Something endorsed by an ex-Red!

Lucas Leiva served Liverpool for 10 years and after a stop in Lazio, he has now returned home to where it all began with Brazilian club Gremio.

He is fondly revered as a cult hero at Anfield and his character has now been showcased once more with Gremio operating in Brazil’s Serie B division.

And after that move was confirmed, Kevin Coleman wrote an ode to the Brazilian and Lucas was quick to spot the piece and say, “What a great article. Thank you very much!!”

With that endorsement, you must give it a read!

Something to make you smile

We know, we know, it’s only pre-season.

However, after the bizarre attention Darwin Nunez attracted in just his first week as a Liverpool player it is only right to acknowledge what a welcome confidence booster his four goals were against Leipzig.

They all came in his 45-minute outing in Germany on Thursday and Klopp was delighted with what was a “perfect night” for the No. 27.

“We always think that if you pay a lot of money then the players feel no pressure or whatever.

“They are all completely normal human beings and the first touch is not perfect then all of a sudden.

“This generation of players read social media, which is really not smart, but they do. All of a sudden you get in a rush and these kinds of things.

“That’s the best way, obviously, to stop all these discussions. He’s a different striker to what we have or what we had, but he’s a really good one.”

With the talent Liverpool has produced over the years it is no surprise to see many former players turn their hand to managing.

It has made for interesting careers to follow after they have each departed Anfield, with Steven Gerrard the one currently captivating many in the Premier League.

But he is not the only ex-Red currently in management or who has been in a role previously, which left us pondering who else has gone down this route.

If you were wondering the same, we’ve done the work for you and picked out 29 former Liverpool players who have sat in the hot seat or turned to an assistant manager position.

It makes for interesting reading with some surprise names nestled in the list!

Makes you wonder who from the current group of players will someday join them.