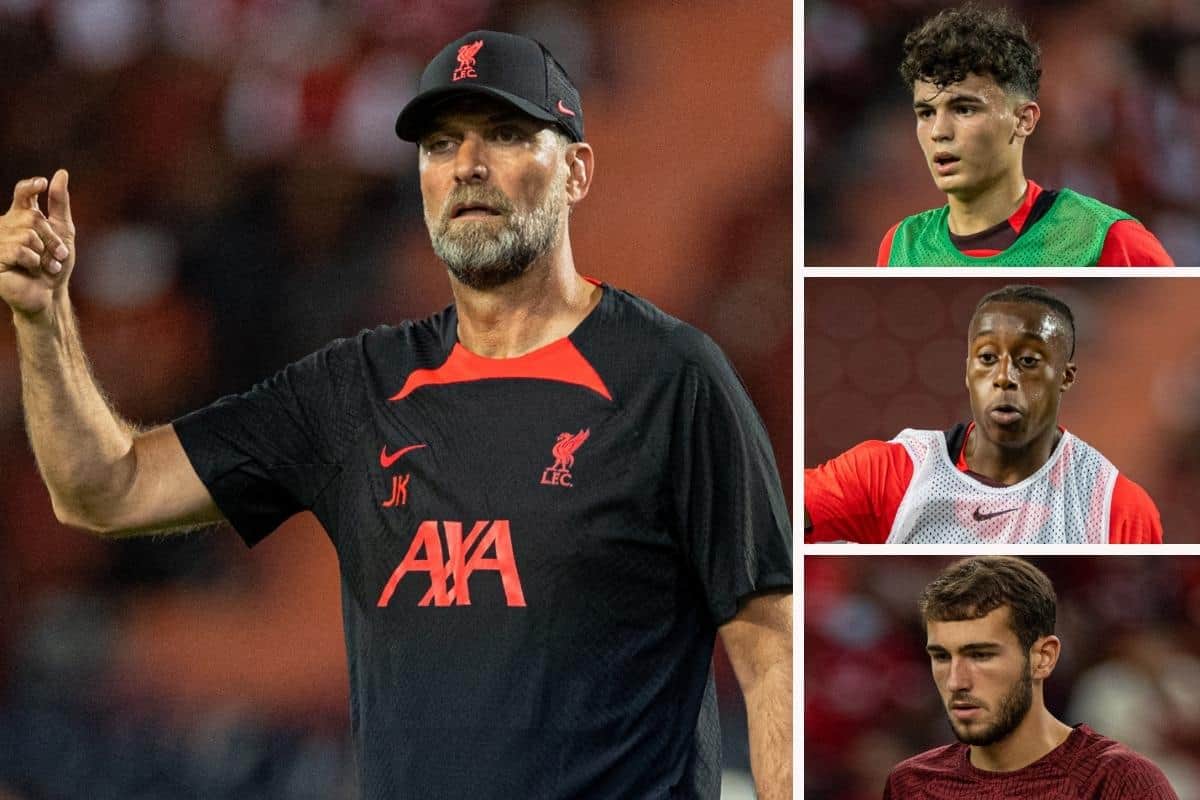 Liverpool were back at the AXA Training Centre on Monday as pre-season work continues, with at least seven young players kept with the first-team squad.

The Reds returned from Asia immediately after the 2-0 win over Crystal Palace in Singapore, landing back on Merseyside on Friday.

Klopp then granted his squad the weekend off, with training resuming on Monday as Liverpool take in a few days back in the familiar surroundings of Kirkby before flying to Germany.

With the players’ fitness managed carefully throughout pre-season, as staff advise a gradual buildup of minutes, the training programme is tailored accordingly.

On Monday, that saw the squad split into batches, with a youthful look to the group pictured working outside at the AXA Training Centre.

Joe Gomez is now back from the minor injury that ruled him out against Palace and took part in the outdoor session, with Jordan Henderson, Joel Matip, Luis Diaz, Nat Phillips and Adrian the other senior players spotted. 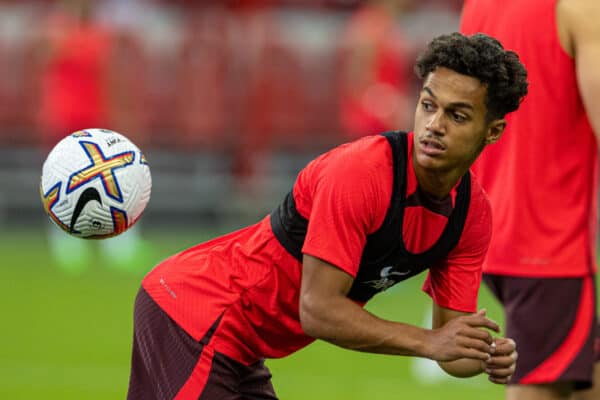 Harvey Elliott and Fabio Carvalho were also involved, while at least seven of the youngsters who travelled to Asia trained under Klopp’s guidance.

Sepp van den Berg, Tyler Morton, Rhys Williams, Isaac Mabaya, Stefan Bajcetic and Harvey Davies were all pictured together, along with Marcelo Pitaluga, who is on loan with eighth-tier Macclesfield but still training at Liverpool.

While Ben Davies is no longer on Merseyside as he edges closer to a £4 million switch to Rangers, it is telling that Phillips, Williams and Van den Berg are still present.

All three are considered available this summer, with the club fielding enquiries for loan deals; as it stands, Williams appears closest to the exit, with a season-long switch to Blackpool expected.

The intense heat will have restricted the workload, and other players underwent different exercises in the indoor gym, including Mohamed Salah and Roberto Firmino. 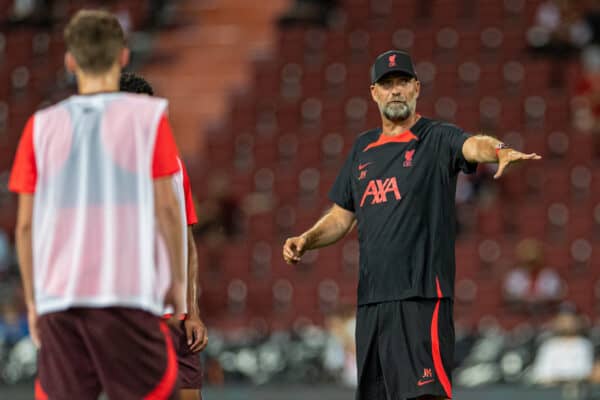 Throw-in coach Thomas Gronnemark was back at the AXA Training Centre to coach the players through various drills, with the likes of Van den Berg and Mabaya likely to have benefited from his tuition.

Liverpool are yet to confirm the squad to travel to Austria later this week, with an extended group due to fly out via Germany.

It remains to be seen whether any of Alisson, Alex Oxlade-Chamberlain, Diogo Jota, Caoimhin Kelleher, Calvin Ramsay, Kaide Gordon, Melkamu Frauendorf or Tom Hill will be named due to injuries.

A friendly with RB Leipzig is scheduled for Thursday evening, before the Reds settle for an eight-day training camp under the Alps, which will include a meeting with Red Bull Salzburg on July 27.