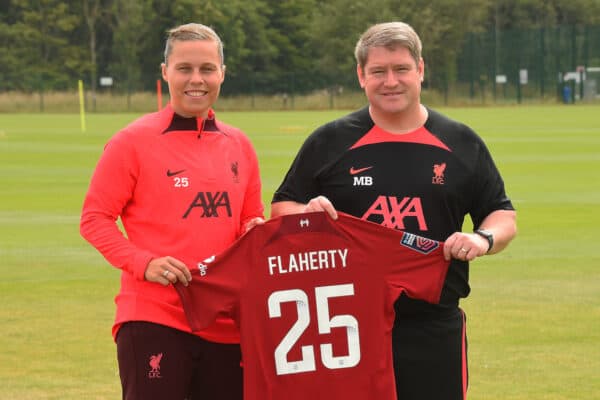 Liverpool FC Women have confirmed the signing of Gilly Flaherty, their second arrival of the summer.

The experienced defender joins the Reds after four years as captain of West Ham United Women up until her departure in May.

The 30-year-old had previously enjoyed hugely successful spells with Arsenal and Chelsea Women, collecting a swathe of league and cup triumphs.

Flaherty worked alongside LFC Women manager Matt Beard during his spell at West Ham and they took the club to the Women’s FA Cup Final in 2019.

Beard said: “The gap from the Championship to the Women’s Super League is getting bigger every year.

“I’ve worked with Gilly before and I followed her career when she was at Arsenal and Chelsea. She’s a fantastic defender, a great person, she’s a leader and I’m looking forward to working with her again.

“We had a great working relationship at West Ham and I think we’re really lucky that she decided to move on and she’s chosen Liverpool.

“She can play centre-back, she can play in the holding midfield role which she’s done a few times in her career, so again that’s a little bit of versatility too.”

London-born Flaherty said a conversation with Beard and LFCW managing director Russ Fraser was enough to convince her to head north to join the Reds.

She said: “It feels great to be here. It only took one chat with Beardy and Russ to know how exciting it is to be here and the vision of the club. I’m so grateful to be here and get the chance to join the family.

“I’ve got a lot of respect for Beardy and he’s one of the managers who has got the best out of me during my career.”

Flaherty is no doubt about what she can add to a Reds squad which will return to the Women’s Super League in September after a title-winning season in the FA Women’s Championship.

“I’ve played in the WSL for more than 10 years now, I’ve got a lot of experience in it and I know what it takes to win.

“I know what to expect and that’s why Beardy has brought me here, to give that experience to any players who haven’t had it yet and be a leader alongside the many leaders he’s already got at the club.

“The WSL gets harder every year, it’s going to be tough but it’s what you want as a professional player.”