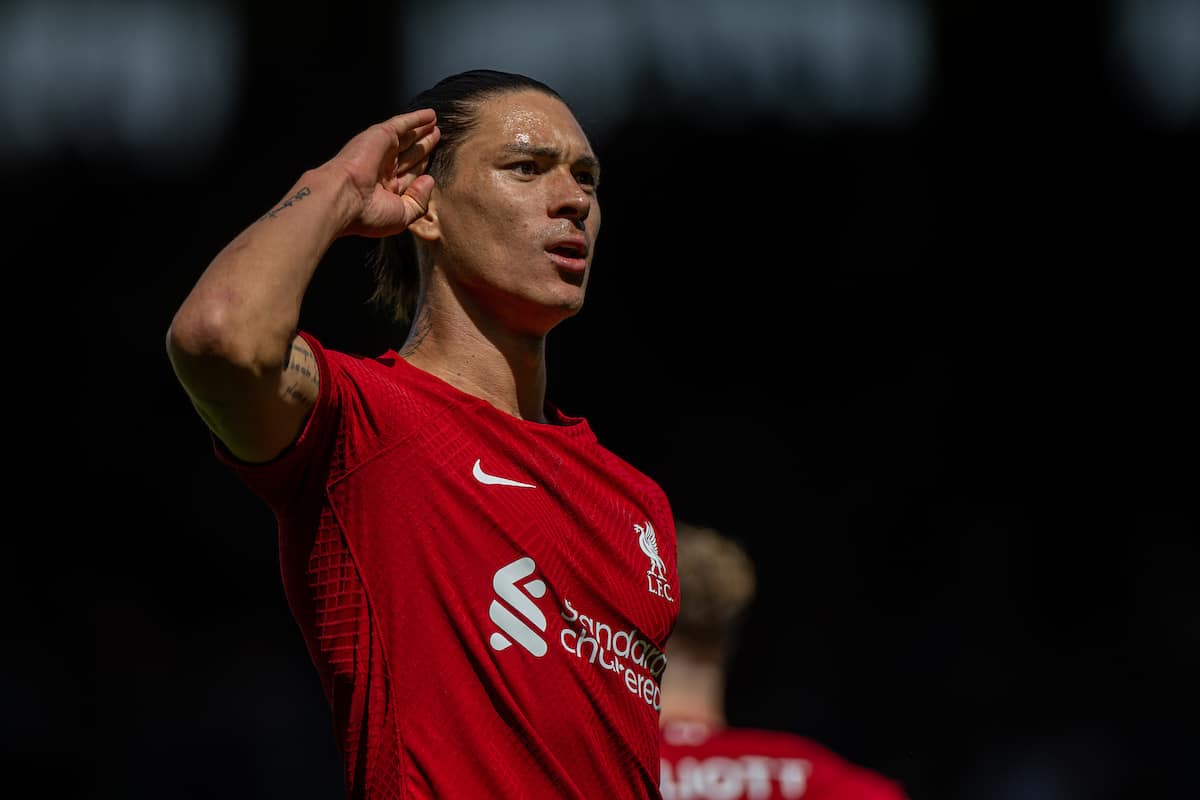 Liverpool’s Premier League opener against Fulham didn’t go to plan, but things could have been much worse without the contributions of Darwin Nunez, who impressed once again.

Liverpool’s £85 million summer signing came off the bench with his team trailing 1-0, before levelling the score and setting up Mohamed Salah for the Reds’ second equaliser.

Aside from Nunez’s cameo, it was an otherwise underwhelming Liverpool performance, who have now failed to beat Fulham in their last three league meetings.

Here’s how the media assessed Liverpool’s 2-2 draw at Craven Cottage.

Nunez saved the day, now he must be trusted from the start 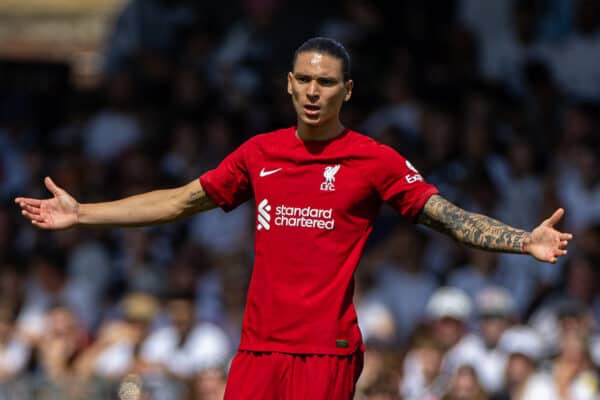 The Echo‘s Ian Doyle believes Jurgen Klopp will have to unleash Nunez from the off sooner rather than later.

”A goal and an assist – of sorts – in both, Nunez couldn’t have done more from the bench in his opening two games. Firmino’s starting position is already looking precarious.

“Liverpool weren’t prepared for this afternoon. But, as Klopp said before the game, Nunez is ready for the Premier League. The Reds can’t keep him on the bench for much longer.”

GOAL‘s Neil Jones believes the Uruguayan still has some adjusting to do, but his potential is there for all to see.

“His ability to create chaos in and around the penalty area is already clear.

“He can tidy himself up, for sure, and will need time to read his team-mates’ moves and tendencies, but Nunez’s potential is huge.

“In contrast to Firmino often disappearing and appearing into space, Nunez offered a gravitational pull all of his own.

“He attracted the ball every time, but also three Fulham defenders. That had the multiplying effect of also freeing Salah, which was were that equaliser came from.”

There was also praise from a certain Match of the Day presenter, who’s in no doubt the Uruguayan will score plenty of goals for the Reds.

Darwin Nunez equalises for @lfc. Very clear, from that goal alone, that he’ll score bundles. The movement of a goal-scorer.

Jones also honed in on Liverpool’s ever-increasing injury list, with Thiago the latest to pick up an issue on Saturday.

“Another game, another injury. That’s 10 first-teamers on the sidelines for Liverpool now, with Thiago Alcantara the latest to fall.

“Klopp’s squad, when all are available, is extremely strong, but at the moment it looks wafer-thin, which does not bode at all well ahead of such a gruelling campaign.”

“The Reds were simply nowhere near their collective best in the capital as Marco Silva’s Championship winners showed what they are about with a performance full of heart and desire that dragged Liverpool into the sort of dog fight they are usually so adept at side-stepping.

“When the manager is questioning the application of this group of players, it’s a massive sign that things haven’t gone according to plan.”

The Guardian‘s Sachin Nakrani feels it could be time for Harvey Elliott to be trusted in the starting XI once more.

Liverpool running out of midfielders with Thiago injured. On positive note, Harvey Elliott looks ready to replace him in the starting XI. Really clever and creative use of the ball by him again today. Could well pick up from where he left off this time last year, pre-injury.

The Telegraph‘s Sam Dean rightly gives some credit to Fulham, who were a tough nut to crack throughout.

“The first game of the season is hardly the time to be drawing conclusions but there were two obvious lessons here.

“The first is that Marco Silva’s Fulham look ready to fight for survival this season, as they look to avoid yet another change of divisions in May.

“The second is that Liverpool have not hit the ground running: they were a long way from their sharpest, especially in a stodgy first half.”