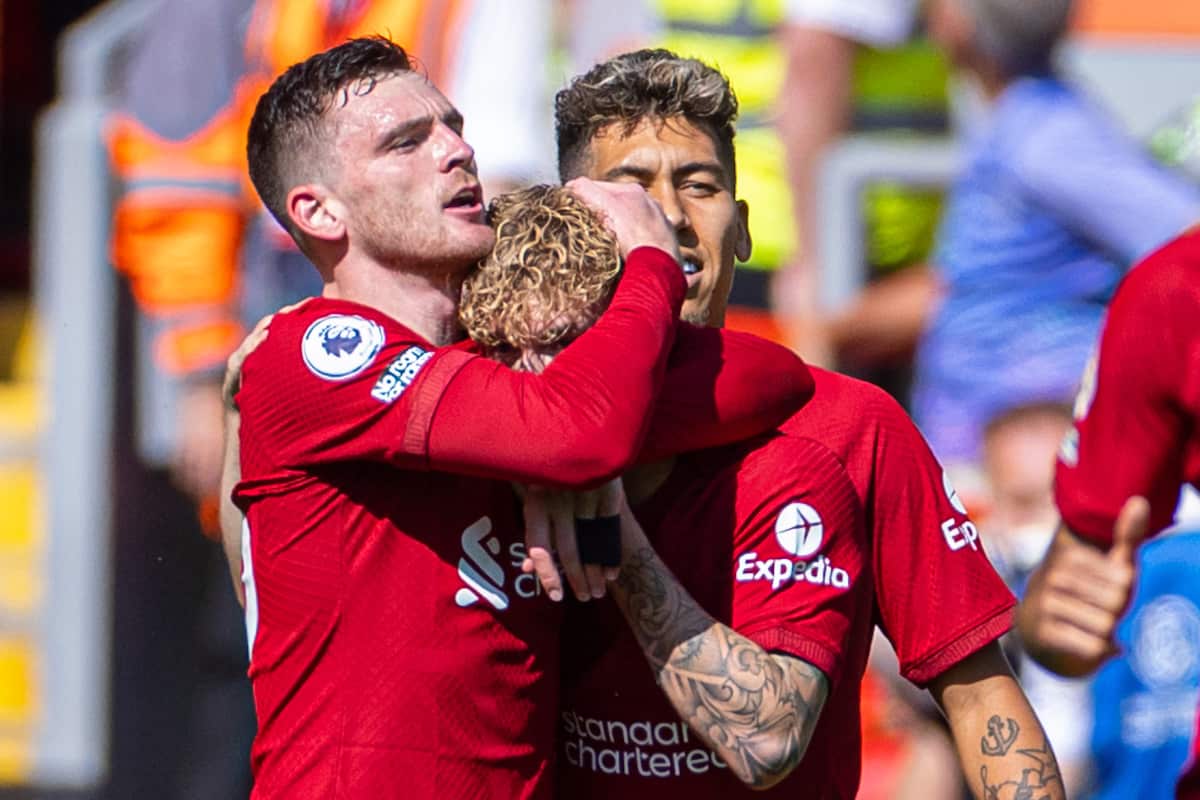 Harvey Elliott was visibly emotional after scoring for Liverpool in their 9-0 victory over Bournemouth, revealing after the game that his nan passed away earlier this week.

The 19-year-old curled in a brilliant goal to open his Premier League account for the Reds in style, before holding his head in his hands during the celebrations.

In his post-match interview with LFCTV, Elliott was in tears when he revealed that his nan had lost her life in recent days.

The youngster went on to dedicate his goal and the victory to his late nan on social media.

Several of Elliott’s team-mates went on to show their support for him with their own Instagram posts, including Tyler Morton and Andy Robertson, who was spotted consoling him in the aftermath of his goal. 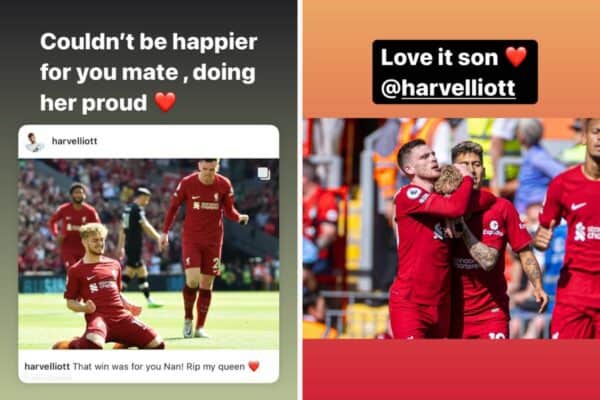 One thing is for sure, Elliott is doing his nan proud with his performances and his conduct, with Liverpool supporters across the globe sharing their love for him after his emotional interview.

Harvey Elliott in tears in his post-match interview with LFCTV as he revealed his nan passed away a few days ago. Explains his emotional goal celebration. She'd certainly have been proud of his goal and performance today.https://t.co/CXxRnRNAJo

Ah, sincerest condolences to Harvey and his family.

For a kid to come out and do a job like that for the team at an emotional time for the family. ?? Well done kiddo, well done. YNWA pic.twitter.com/cOJscFBkoD

Harvey Elliott's dad sits behind me at the match and you should have seen his reaction to Harvey's goal ??

Harvey Elliott broke down in tears after dedicating his goal in Liverpool's thumping win over Bournemouth to his nan, who sadly passed away this week.?? He has for me been one of not our best Player start of the Season.
Keep it up Harvey. YNWA x pic.twitter.com/Z8gt1RVPaV

Harvey Elliott has revealed his goal and emotional celebration was dedicated to his late nan, who passed away earlier this week. A fine display made even more admirable by his off-the-field circumstances.

Harvey Elliott has revealed he was in tears when he scored because his nan passed away a few days ago.

Thinking of you, Harvey. She'd be proud ?? pic.twitter.com/0if2LZakpT

Love this lad – my favourite player. Didn’t realise at the time what he had gone through this week when he emotionally celebrated his goal ? pic.twitter.com/JUkHmPp3t5

Elliott continues to show great maturity with the way he conducts himself at Liverpool, which will be one of the reasons why he is so highly thought of by Jurgen Klopp.

He’s not been without his tough moments at Liverpool, with those at the club hugely impressed by the way he handled the serious ankle injury he picked up last season.

Now, Elliott is showing the world what he’s truly capable of and doing everyone, including his late nan, more than proud.

May Harvey’s nan rest in peace.