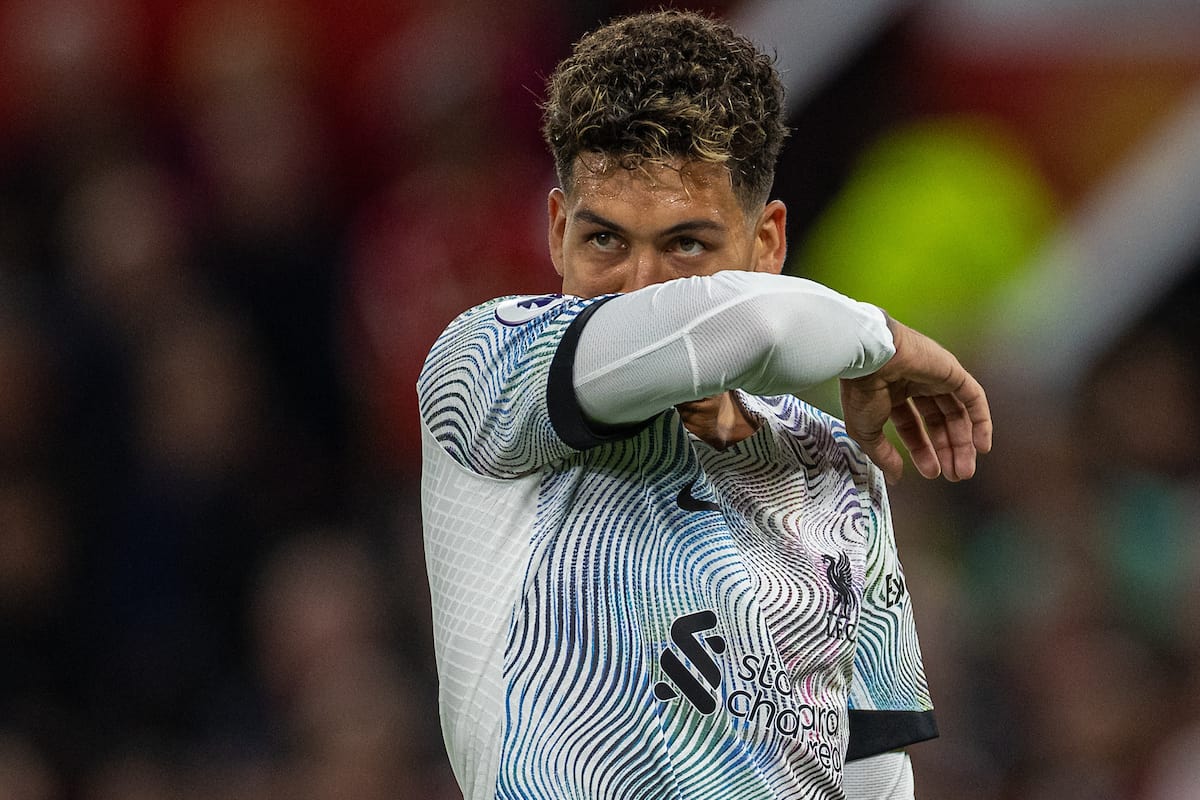 Liverpool fans concerned by “ineffective” Roberto Firmino – “Can’t be part of the plan?”

There were truly few positives to take from Liverpool’s 2-1 loss to Man United on Monday, and there were particular concerns over the form of Roberto Firmino.

With Darwin Nunez suspended and Diogo Jota sidelined through injury, Jurgen Klopp turned to Firmino to start as the Reds made the trip to Old Trafford.

Unfortunately, it ended in a miserable defeat, with Jadon Sancho and Marcus Rashford both scoring before a consolation goal from Mohamed Salah which papered over the cracks.

Liverpool were shocking for much of the night, and the role of Firmino can certainly come into question, as there was no focal point in attack as the Brazilian continued to drop deep with no overlap from midfielders James Milner and Harvey Elliott.

The No. 9 is expected to start the next two games, too, with Nunez facing more time out, and the reaction of fans on social media suggests it could be a worry.

Firmino is so deep he's practically playing in a double pivot with Henderson.

Can someone please inform Roberto Firmino he is not playing in defensive midfield?

… from tactical POV, it’s scary how ineffective Firmino has become. One issue appears to be that centre-backs aren’t coming out with him when he drops deep, probably because they know he won’t do anything. That leaves Diaz and Salah up against an entire back four. It’s too much.

Firmino being this deep can’t be part of the plan, surely?! #MUNLIV pic.twitter.com/f29tKDvwRN

Average positions for #LFC tonight. Where's the No. 9 meant to be? pic.twitter.com/a5f8yYkzNC

Firmino's heat map in the first half. It was fine in the past when we used Salah and Mane as inside forwards but we keep Salah and Diaz really wide now. pic.twitter.com/JEQmdLUyh5

That Nunez red card is pissing me off even more now. We’ve got Firmino playing CM and then playing FIFA street.

Firmino at his best would still miskick volleys, he’s evidently not the player he was but he did a lot of what he used to do today. The issue is there’s no longer a need for it with how we look to attack, our CF & wide forward roles have drastically changed & we need diff things.

Firmino has been anonymous. Nunez's naivety has been really felt this first half.

Firmino with that performance played for 95 mins. Enough said about the squad.

Firmino's decline saddens me greatly. Shadow of what he was.

Firmino is a legend at Anfield, one of the most important players of Klopp’s successful tenure and a revolutionary in the centre-forward role.

But there can be little arguing that, at 30, he is fading in influence, and where he tore United apart with a brace in the 4-2 win at Old Trafford in May 2021, now he found himself shunted out of the game.

The manager will almost certainly be aware of this, and it is how he and Firmino address the situation before the clash with Bournemouth that could be key to Liverpool’s revival.