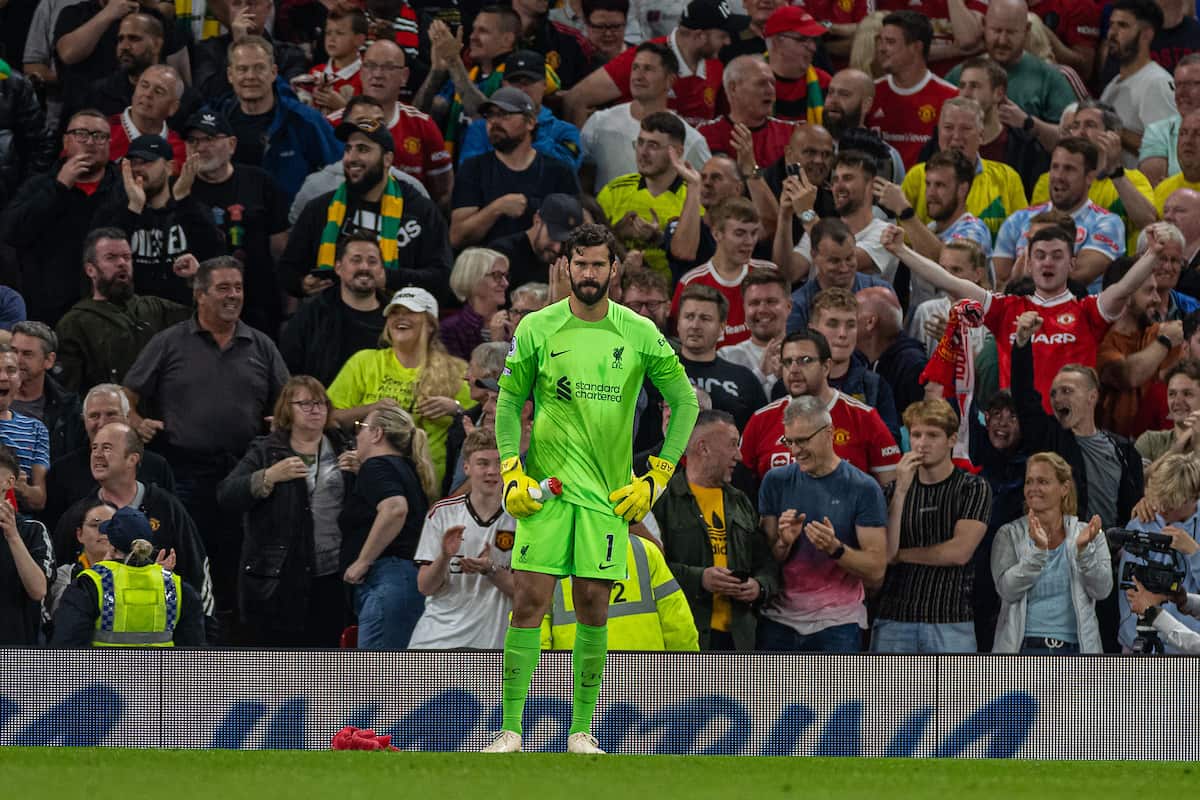 Liverpool were awful collectively and individually, beaten 2-1 by Man United on an extremely worrying night.

Alisson was hoping for a quiet night between the sticks, but instead, he had to watch his team flounder in front of him.

He got some crucial fingertips on a Christian Eriksen free-kick, but as has been the case too often of late, his distribution was shaky a few times.

More blameless than any Liverpool player.

Sorry Trent, but keep defending like this and the narrative isn’t going to go away.

The right-back was all over the place in the first half, being caught out of position for Jadon Sancho’s opener and also receiving a yellow card.

There were moments of quality going forward, but like so many, he has made a sluggish start to the season. Passing was poor, crossing was wayward, and hopeful balls to Salah didn’t find him.

Gomez started alongside Virgil van Dijk for the first time since 2020 but rather than a happy reunion, it was a night to forget.

Gomez was part of a shambolic defence in the first half, albeit arguably the best of a bad bunch, before Marcus Rashford ran off him for the second goal.

Others were worse, but this was a bad night. 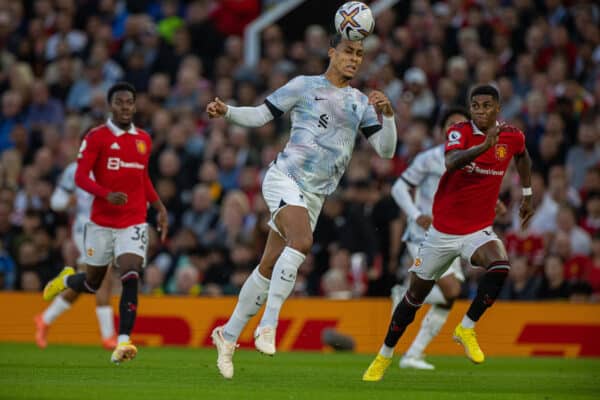 Van Dijk has been short of his unrivalled best so far this season and that continued, in what was one of his worst-ever displays for Liverpool.

The Dutchman was lackadaisical too often and weak for the opening goal, making a horribly lazy attempt to block Sancho’s shot, on the receiving end of words from Milner afterwards.

There was nearly a mix-up with Alisson, too, with Van Dijk worryingly looking more like Harry Maguire.

Robertson used to have a telepathic understanding with Sadio Mane, but he is still waiting to fully click with Luis Diaz down the left flank.

Liverpool’s left-back was caught out a few times defensively and allowed Sancho to get the better of him, and didn’t offer anywhere near enough in attack.

Lacked energy, which is concerning for such a relentless player. Perhaps no surprise after he was over-played last season though.

Henderson started in the No.6 role after the surprise omission of Fabinho, as he played in a position that could become more regular with age.

The captain was woeful, not shielding the defence and often barking at others when he was as much to blame to anyone.

Awful for the second goal, in particular, losing the ball and not recovering afterwards. Dire. 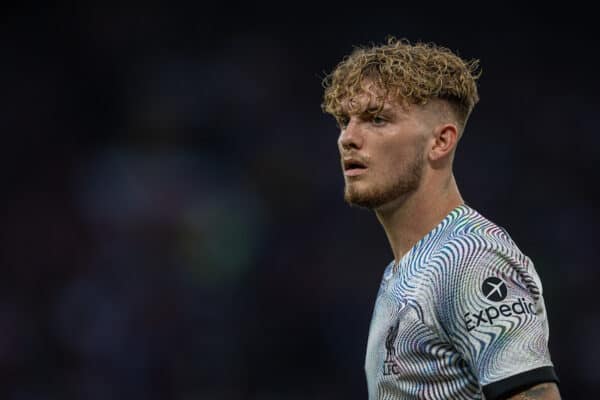 Jurgen Klopp showed real faith in Elliott, keeping him in the team after being one of the rare brighter points of the campaign to date.

The teenager was the brightest Liverpool player and he did provide some much-needed guile and effort.

He wasn’t blameless, however, and was part of a midfield that lacked control and wasn’t good defensively for Sancho’s strike.

Often seems to be too wide in midfield when we’re defending, which led to United slicing through midfield too easily.

James Milner shouldn’t be starting at Old Trafford at the age of 36.

This is what happens when he does, with the veteran providing plenty of effort but little output.

He was slow to too many balls, ponderous in possession and generally lacked any kind of positive influence on proceedings.

Constantly bickered with Van Dijk, suggesting that all is not well at Liverpool currently.

Salah was looking to continue his rich vein of form against United, memorably scoring a hat-trick at Old Trafford last season.

As has too often been the case this season, though, he found himself on the periphery of the action, being marked well and not getting any service.

He kept trying to reduce the arrears and did just that, pulling a goal back with a header.

Diaz tried his best to make things happen, but he was marked excellently by Diogo Dalot, who got the better of him.

Poked wide after one nice piece of play and faded as the minutes passed – this was a game where Mane was missed on the left-hand side, with the Senegalese more of a natural goal threat. 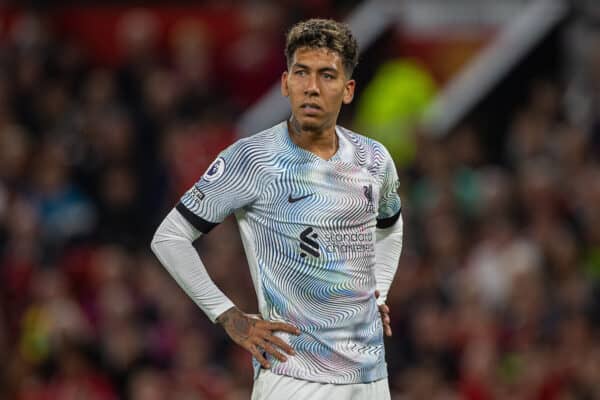 With Darwin Nunez suspended, Firmino led the line – or should have, ending up deep in midfield far too often.

This was the same pale imitation of the once-great player who used to light up games, with the Brazilian anonymous both on and off the ball.

One stupid scooped pass in a good position, when an easier ball was on, summed up a forgettable evening, as did an air-kick.

Saw a header saved, that was about it. Weird that he didn’t start, even if he has been off form of late.

Made a difference – shot saved by David De Gea before Salah headed home. Should be starting games at this rate.

No real time to make an impact. Might be worth starting him and saving Robertson from collapsing. 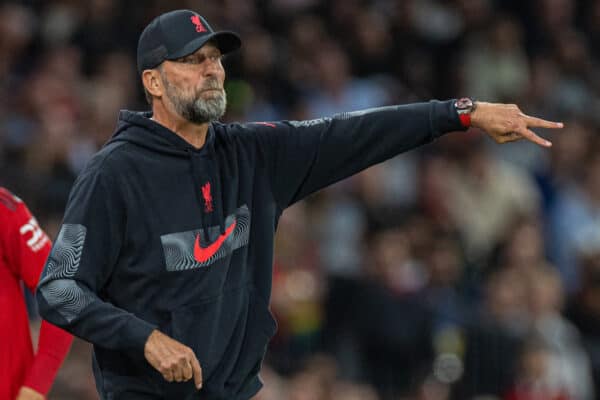 Klopp made a big decision in leaving out Fabinho, but if the Brazilian was fully fit, it backfired spectacularly.

Injuries are an excuse, but the boss has to handle what is now a mini-crisis at Anfield, as well as signing a midfielder.

These feel like worrying times, without overreacting too much.