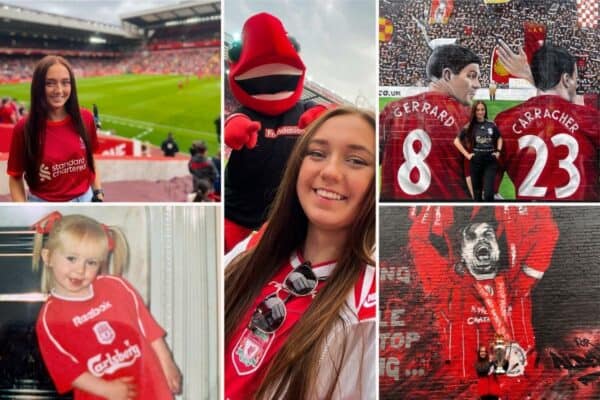 In the latest edition of ‘My Liverpool Life‘, Liverpool fan and matchday vlogger Courtney Neary shares her unique way of supporting the Reds and showcasing the club to the world.

I was brought up in a family where everyone was a Red. My dad worked at Anfield and my grandad used to stand in the old Boy’s Pen on The Kop as a kid.

As I grew up, my mum and I moved out of Liverpool but it only strengthened my love for the club and city.

Something I can’t remember! I was a little baby when I started going to the odd FA Cup game or youth games at Anfield.

The first game I do remember going to was Southampton at home in the Premier League in the 2012/13 season, which we won 1-0 thanks to a goal from Daniel Agger!

I’ve been supporting the club since I was born, but the season I started going to the game whenever I could was 2012/2013.

But if we’re talking about my favourite season, it was probably 2018/19.

Winning the European Cup for the sixth time and going so close in the league, it felt like the beginning of this new incredible Liverpool side.

It had sentimental reasons for me too as in January 2019 I lost my Grandad, so seeing You’ll Never Walk Alone sung by the players in front of the Kop after the Barcelona game hit me hard.

It’s where my Grandad would be as a kid and then he saw me start going, and then we always talked before or after the match about the game and the team.

Us winning the Champions League just felt like one last gift from him, he may not have seen them win it but he saw the team that won it for us which had a nice feeling to it.

Also, who can forget the famous Origi moments that season?! Last minute against Everton to ‘corner taken quickly’, and the winner in Madrid! It’s the season I definitely have the best memories from.

Wherever and whenever I can, if I can get a ticket and afford the travel you’ll see me there!

No matter where you go, you’ll always find more fans! Or just “Liverpool!” or random players’ names being shouted at you if you have an LFC top on.

I always love making new mates at the match, home and away, and just from chatting about the Reds.

Being on The Kop with my dad for the greatest derby goal ever! It’s rare that my dad and I can get tickets sat together, let alone for one of the biggest games of the season.

But let’s go back to December 2, 2018. It’s the 96th minute, Pickford fumbles the save and Divock Origi heads it into the back of the net!

I’ll never forget seeing people slowly walking out while still watching, waiting for the final whistle and when Divock scored they just hugged whoever was near them and a few even fell down the stairs or over seats.

My Dad picked me up in celebration and somehow I ended up with a massive bruise on my leg from the celebrations, to this day I still don’t know how I got it!

Alan Kennedy! He’s probably the favourite player I’ve met. He loves talking and telling stories about his time playing for the club.

If you ever get the chance to meet him, you can guarantee you’ll walk away 10 minutes later with a new story about the club from him.

Back in lockdown for Covid, I was up in Durham with my Mum, stepdad and little brother, during this time I really missed football and the city.

When I finally came back after the first lockdown I realised I wouldn’t have been the only one.

It originally started with going live on Instagram on walks around Anfield or after the match to talk about it.

Then, when the fans finally came back to stadiums last year, I decided to start adding matchday vlogs to my channel, one to bring the matchday experience to fans around the globe but also to have memories to look back on.

I hope with the channel I keep bringing these matchday experiences to people who can’t go, but also show off what you can do if you don’t have a ticket with all the pubs around the ground.

I’d also like to bring in more of myself and show off the other interests I share with people on social media. Such as trips to places I love like Orlando, or places new to me.

And while I’m in new places I plan on finding and visiting the supporters’ clubs there!

Bill Shankly – My grandad would always hark back to Shankly’s days whenever I spoke to him before and after the games. He’d go on about how Shankly was the best manager. So I’d love to sit and chat with him about how he turned Liverpool into the club we know and love today.

Jurgen Klopp – The manager who brought back the good days like Shankly. Klopp is up there with him and I’d love to see them together having a good chin wag.

I couldn’t even imagine what it’d be like with those two. Also, I’d probably cry on Klopp (which Red wouldn’t after what he’s done here?) to which I’d imagine he’d have one of his hilarious witty remarks to make, followed by an infamous Klopp hug. I think Klopp would have you laughing throughout the meal.

Steven Gerrard – I think for my generation, Gerrard is and always will be our hero. He’s our era’s King Kenny.

I’d love to hear his stories from the dressing room, from Istanbul to the title race in 2014, even the treble in 2001 where I could tell him about me dancing on the tables as a two-year-old in the pub after the finals!

* Thanks to Courtney for sharing here ‘Liverpool Life’. You can find Courtney on Twitter @Courtney_Neary.