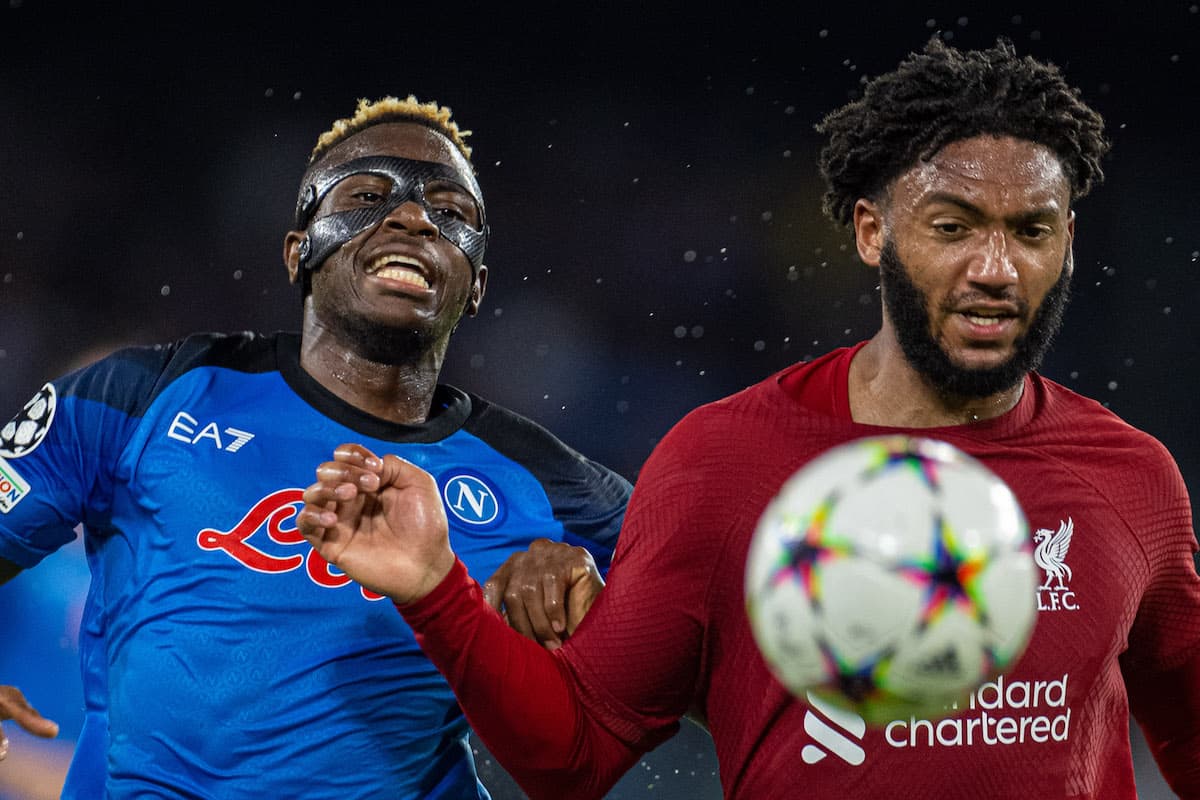 Jamie Carragher has brandished Liverpool’s high line woes as “suicide football,” with tweaks needed during a time when intensity off the ball is nonexistent, as was the case at Napoli.

The Reds have set the benchmark for other teams to rise to in recent years but so far this season Liverpool have been a shadow of their former selves.

And they were again exposed at Napoli, with the lack of pressure on the ball only inviting the Italian side to exploit the high line, as they had ample time and space to do so.

Jurgen Klopp has said the “problem is not the high line,” it’s the lack of intensity to make it work – a point Carragher agreed with but has again stressed the need to adapt.

In his post-match analysis for CBS Sport, Carragher assessed the positioning of Joe Gomez, Virgil van Dijk and Joel Matip, all of whom tried to hold the line when there was a forward-facing runner and the ball carrier had time and space.

"It's the actual performances probably more than the results that is worrying me right now…"@Carra23 thinks Liverpool's high-risk style is working against them. pic.twitter.com/B8HBzY1SAA

“This is a problem for Liverpool, the high line, they’re not actually getting pressure on the ball,” the ex-Liverpool centre-back said.

“It is not a problem how high your line is, it’s about being compact, being together. But when someone gets time on the ball, you can’t put the brakes on.

“It’s too easy to get through Liverpool’s midfield, that didn’t happen before so you could play the high line and be really compact, if that’s not happening you have to adapt.

“People may criticise me, even Liverpool supporters, because this team is so fantastic, this is what they’ve done and had great success, but all I’m talking about is five yards. 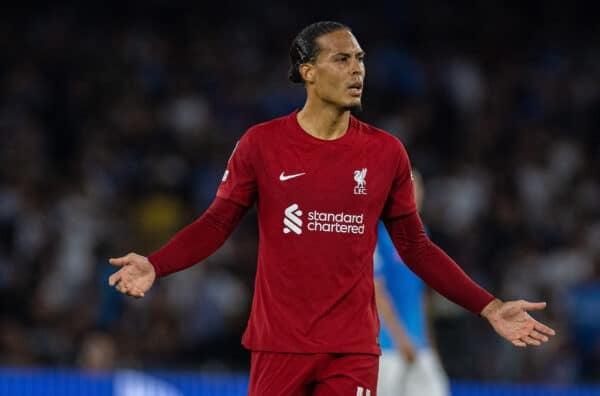 “I’m not talking about a Liverpool team retreating ten, 15, 20 yards back.

“It’s embarrassing. It really is,” Carragher said of the defensive line in the lead-up to Napoli’s fourth goal.

“I said before it’s kid stuff and this is the big problem with Liverpool right now. They’ve built their success on intensity on the ball, which means the opposition can’t get the head up to put the ball over.

“So your team’s always tight. Always really compact. At times [there’s a] risk, but you’re getting energy on the ball, but that energy is not there now so that back four has to adapt and it has to go back three or four yards.

“That’s all we’re talking about. But if they keep playing [like] that they’re gonna have a big problem in terms of the Premier League this season and qualifying for the next round of the Champions League, because that is suicide football.”

And Carragher will also not be alone in asking if “this is a massive drop off physically because of what’s happened over the last five or six years the way they’ve played, how intense they’ve been? And can this team get it back?”