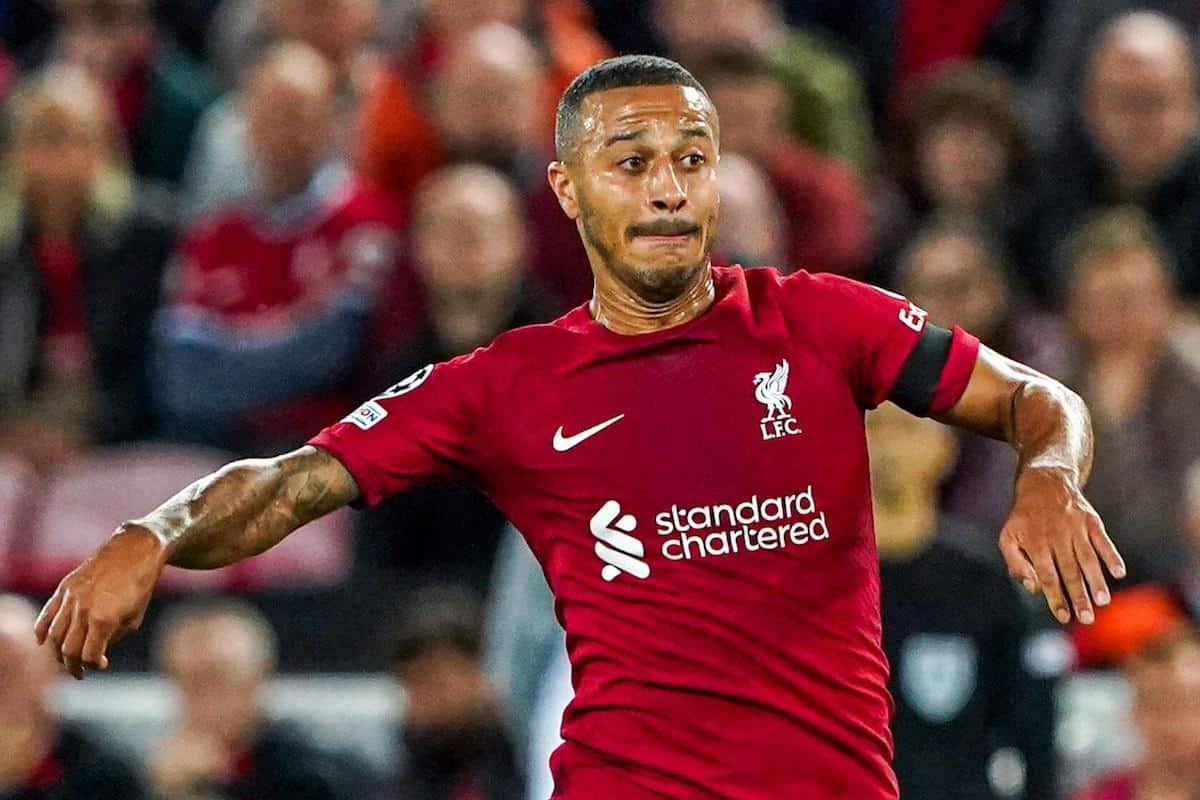 Thiago lit up Anfield in the win over Ajax, showcasing just what Liverpool have been missing in his absence as he pulled the strings and kept his side ticking throughout.

Is there any way we could have a clone or two of Thiago?

The Spaniard made his first start since the opening day at Fulham on Tuesday, much to the delight and relief of Reds as Liverpool needed to get themselves back on track.

With an 89 percent pass success rate, 10 recoveries, 100 percent accuracy with the long ball, 13 passes into the final third and countless jinks and gee-ing up the crowd, Thiago‘s night was a standout.

The 31-year-old put on a masterclass throughout his 90 minutes on the pitch and for those at Anfield it was difficult to tear your eyes away from the magic he unleashes on and off the ball.

Thiago is a delight to watch in action and it’s no surprise that his performance on Tuesday has supporters still eulogising over him.

Thiago Alcantara absolutely revelling in it, and why would he not?

Btw that Thiago performance? That is actual tangible leadership. Not all that ideological bulldog spirit bullshit. Stepped into that starting XI and elevated everyone around him in a team lacking confidence during a bad patch. Elite

Me after every Thiago masterclass pic.twitter.com/KosDRz4ybP

Thiago walking back in the changing room after his masterclass tonight pic.twitter.com/p5FDMo0Tas

Gerrard aside, he's the best Liverpool midfielder I've seen in my lifetime. Genuine joy to watch.

Just such a shame we didn't sign him five years earlier and that he can't stay fit for long periods. https://t.co/Idmev2Bh6x

I’d argue Thiago is Liverpool’s most important player at this point in time. Completely different team when he’s on the pitch. How this season ultimately pans out will have a lot to do with how long he stays fit for.

Incredible player. How could Souness coach at the top level and say Thiago has defensive issues. Others too for that matter The Complete Midfielder https://t.co/tXlxceB0rc

Can you clone people yet, @elonmusk?

We all know Thiago brings huge quality on the ball with his vision, technique and decision making but it was as much his aggression and willingness to get stuck in that stood out tonight. Love him.

Am i overreacting if i say Thiago Alcântara is up there with one of the best midfielders we’ve seen at Liverpool? pic.twitter.com/NGtBZ7V4AU

A blessing and a curse. If Thiago played all season we’d be unstoppable. https://t.co/o16SmGT34m

Thiago makes what he does look effortless and Liverpool certainly look a better side with him in the XI, the task, as it always has been, is to keep him fit so he can be in the team as often as possible.

The composure, awareness and desire to take calculated risks and open up the pitch was instrumental against Ajax and in Thiago‘s absence the Reds don’t have a similar profile to mirror his qualities.

Having now returned from injury he could find himself called up to the Spain squad this month, but Liverpool fans may just be hoping he can instead enjoy a 17-day break before domestic action returns.