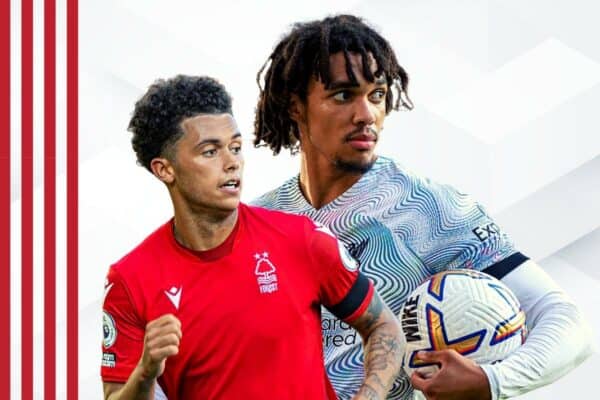 10 key things to know ahead of Nottingham Forest vs. Liverpool

For the first time this season Liverpool can record three successive league victories, and cellar dwellers Nottingham Forest are the side that stand in the way.

There has been welcome feel-good factor injected into Liverpool over the past week following successive 1-0 victories over Man City and West Ham.

The results have moved the Reds into seventh in the table but more importantly, given the team impetus to continue amid serious injuries in attack and a relentless schedule.

A schedule that now takes Jurgen Klopp‘s side to Nottingham Forest and while they may have met earlier in the year, it’s been a long time since they contested a Premier League match.

Here are 10 key things to know ahead of Saturday’s game.

After 23 years outside of the Premier League, Forest’s return makes this the first top-flight meeting between the two teams since April 1999.

Gerard Houllier was in charge of Liverpool and Ron Atkinson of Forest, both overseeing a draw for their respective side with the final scoreline reading 2-2.

Jamie Redknapp and Michael Owen were on the scoresheet for the Reds, who had been expected to dispatch bottom-of-the-table Forest.

It was a lowly position Forest did not relinquish and soon came relegation, forcing a 23-year wait to return to the Premier League.

Now, the two teams meet in similar circumstances to their last league meeting, with Liverpool in seventh and Forest at the foot of the table.

2. The tide is turning

For the first time since December 2018, Liverpool recorded two successive 1-0 victories in the league – and they were certainly needed.

While sloppy at times against West Ham, the win over the Hammers and Man City, just three days prior, has eased the turbulence underfoot.

The Reds are now seven points behind Pep Guardiola’s side as opposed to the 13 just one week ago, clear progress. But it cannot stop there.

This is one of seven games remaining on the schedule before the World Cup break and Liverpool cannot afford to underestimate Forest, if this season has taught them anything it ought to be that.

3. Are Forest better than their position?

Forest’s only win of the Premier League season came against West Ham on the second matchday, since then they’ve lost six and drawn three – conceding 21 in that time and scoring six.

Their start hasn’t come as a surprise after signing 21 players during the summer and Cooper continually tweaking his XIs and formations to find what works best.

But what they have done of late is tighten up at the back, with two draws (Aston Villa and Brighton) and a defeat (Wolves) in their last three games, conceding just two in that time.

It’ll give them some confidence with Liverpool coming into town in a fixture they know is a free hit for them.

4. Will Klopp be on the touchline?

The manager was charged for his actions on the touchline against Man City but was free to be in the dugout against West Ham after being given until Friday to give a response.

And Liverpool have completed their formalities but the manager still expects to be in the dugout on Saturday.

“It’s a normal process, we are not now too used to it, but we have enough people who know how it goes. We did everything we had to do.”

That’s Klopp’s position less than 24 hours before the game but that could all change, only time will tell.

5. How many changes for Liverpool?

It’s a quick turnaround between Wednesday evening and early Saturday afternoon, 63 hours to be exact, and with injuries and workload to consider, Klopp has decisions to make.

A straightforward one would be for Andy Robertson to replace Kostas Tsimikas, despite his midweek assist, while Fabinho will be in line to take over from Jordan Henderson.

The captain has started five of the last six games as opposed to the Brazilian’s three in six.

A late call will need to be made on Darwin Nunez, though, after a hamstring issue from midweek – an absence for the No. 27 could see Harvey Elliott start and Mo Salah shifted forward.

Alex Oxlade-Chamberlain is back amongst the squad and Naby Keita has returned to training but the match comes too soon for either to start after lengthy layoffs.

6. Neco against his old side

Neco Williams has made 11 league appearances for Forest since his summer move, impressing on both flanks despite Cooper’s constant tweaking.

And he could line up opposite Mo Salah should both Renan Lodi and Harry Toffolo miss out through injury, but Serge Aurier may also drop out to shift Williams to his favoured right flank.

Another ex-Red in Taiwo Awoniyi will be hoping to feature but may be kept out of the forward line by Morgan Gibbs-White, Emmanuel Dennis and Brennan Johnson.

Speaking to the media ahead of the match, Klopp touched on what the change to a 4-4-2 formation has offered his side, “stability” being the key:

“Stability and closing gaps we left open – not on purpose it just happened, we played for quite a time a specific way and when you get used to things you lose a little desire for detail.

“Little things can change a lot so that’s why we had to change a big thing and start thinking new about it as a group.

“It’s not a big difference, it’s a change of responsibility slightly. It gave us, so far, more stability in different moments and in the last game we changed to a 4-5-1 to get stability again.

“It all depends on who is available, fit – when we started the 4-4-2 we had two more strikers available, so we have to stay open to all the possibilities.”

It’s crazy to think that Liverpool have yet to win away from home in the league this season.

They’ve endured two draws (Fulham and Everton) and two defeats (Arsenal and Man United) on the road so far, the first time since 2010/11 they’ve not won in the first four league away games.

All of that sounds rather doom and gloom, but the good thing is Liverpool have failed to score in only one league game in 2022, in a goalless draw at Everton last month.

And adding to that only Leicester (24) have conceded more goals than Nottingham Forest’s 23 this season and they have lost more times at home in the Premier League (three) than any other team.

All will depend on which Liverpool turn up.

9. Tierney with the whistle

It’s Klopp’s favourite referee that’s in charge for this one (*said with sarcasm), with Paul Tierney appointed for the match.

“I have no problems with referees, only you” is what the manager said to Tierney after Liverpool’s draw at Tottenham last season – there’s no love lost there!

Tierney was in charge of the Reds’ first home game of the season against Crystal Palace, which ended in a draw, with Nunez sent off and six yellow cards dished out between the two teams.

The VAR for the match is Mike Dean.

Liverpool’s trip to Forest is being shown live on BT Sport 1 in the UK, with coverage starting at 11.30am ahead of the 12.30pm kickoff.

If you fancy a more biased take on proceedings then This Is Anfield’s matchday live blog is the place for you, with Sam Millne to keep you company and up to date on all the action from 11.45am.