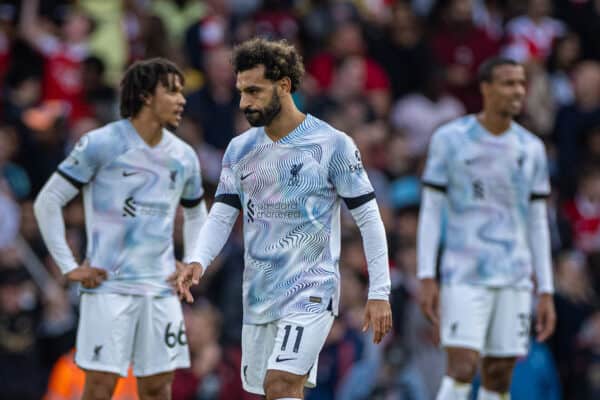 Liverpool’s defensive fragility again came out to play with Arsenal inflicting the second league defeat of the season, with a 3-2 loss keeping the Reds on a lowly 10 points.

After a change in formation reaped a positive result in midweek, Jurgen Klopp stuck to the formula against an in-form Arsenal, but it did not prove as successful in the capital.

Within just 57 seconds, though, the ball was in Alisson‘s net as the Reds’ proficiency for conceding first continued, with Gabriel Martinelli finishing after just four Arsenal passes.

That’s 10 of the last 12 league games that Liverpool have conceded first.

The pressure was piled on Klopp’s side, with the threat of being exposed on the counter a real one as the flanks were left exposed for Arsenal‘s forwards and midfield to run into.

But the lion’s share of possession soon came Liverpool’s way to help find them their feet in the contest, calming the nerves, creating chances and turning into the side asking the questions.

Darwin Nunez soon capitalised, latching on to Luis Diaz‘s pass across the box with a tidy sliding finish as the Reds played behind the Gunners’ defence for 1-1.

A knee injury to Diaz forced him off just before the break, Roberto Firmino his replacement, and at a time when Liverpool had to be aware of the clock and stay disciplined, they let Arsenal slice through them from their own offensive free-kick.

Bukayo Saka converted at the back post in the final seconds of the half, but the Reds were not without their chances to stop the play in its infancy. Frustration to hope and back again.

The second half started with Joe Gomez replacing Trent Alexander-Arnold, who rolled his ankle earlier in the game – taking the casualty list to two in 45 minutes.

In a reversal to the end of the first half, an Arsenal side in control were hit by a Liverpool counter-punch, Firmino finishing aplomb after a delightful Diogo Jota pass to level the scores.

Klopp’s side continued to toe the line of danger at the back, though, and Klopp turned to Ibrahima Konate and Fabinho to force Henderson to shift to the right of midfield.

Just seven minutes and some chaotic defending in the box later, Saka converted from the spot after Michael Oliver dished out a soft penalty, no doubt swayed by Gabriel Jesus’ acting skills but not helped by the inability to clear the lines.

The result moves Arsenal back to the top of the table and keeps Liverpool on a lowly 10 points after eight games.

There’s little time to wait for the next match as a trip to Rangers awaits on Wednesday evening.