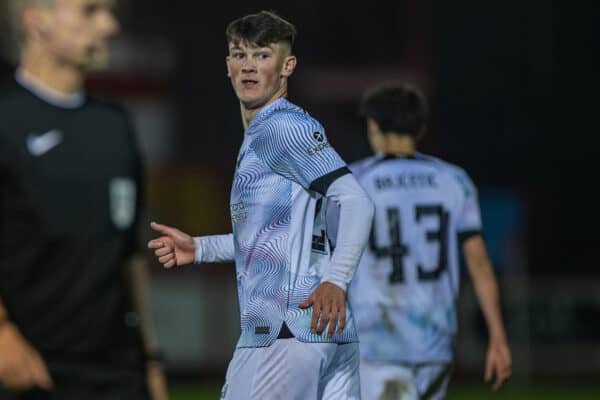 Calvin Ramsay came off the bench for his first game in Liverpool colours – and scored – as the under-21s lost 3-2 at Accrington Stanley.

Three-and-a-half months on from the first day of pre-season, when his injury problems were first discovered, Ramsay finally made his first appearance for Liverpool.

It came in an EFL Trophy clash that looked set to trail out in the routine, as League One side Accrington Stanley took a 3-0 lead midway through the second half when Ryan Astley added to Tommy Leigh’s brace.

But the introduction of Ramsay and his fellow Scot, the 16-year-old Ben Doak, changed the game for the young Reds, who rallied late to secure a more modest result.

Liverpool had already shown positive signs, particularly through the bright Mateusz Musialowski, and Melkamu Frauendorf had seen an early goal ruled out due to offside.

Harvey Davies was the busier of the two goalkeepers, however, and the 19-year-old made some strong saves against senior opposition.

After previous defeats to Salford City and Rochdale, it was always going to be a tough night for Barry Lewtas‘ side, but Ramsay and Doak both struck within three stoppage-time minutes to bring it back to 3-2.

Ramsay’s goal came off his weak foot, finishing well after Doak’s cross was deflected into his path, capping a promising first night in a Liverpool shirt.

Then Doak, who went into the game with six goals and five assists in 10 previous outings at academy level, reduced the deficit further as he improvised a finish from close range deep into additional time.

Though it wasn’t enough to clinch a draw for Liverpool, it certainly left a positive tinge on the night, with the young Reds having expected to be in for a hard fight in Accrington.

For Ramsay, it gives something to build on in the weeks to come, with there a chance of a follow-up outing as the U21s host Everton on Saturday.