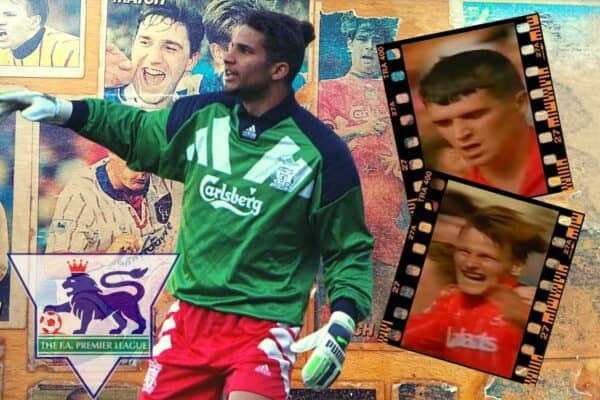 The first live Premier League game on Sky Sports; Nottingham Forest vs. Liverpool in 1992. It was, as goalkeeper David James looks back, “the changing of football forever.”

“The first live game on Sky, the start of the Premier League. Crazy!” James recalls in a recent chat with This is Anfield.

James was one of two debutants for Liverpool, having joined the club from Watford earlier that summer.

Little did the £1 million signing – or anyone else for that matter – realise what an historic moment he was part of, or that it would be the first of his 572 Premier League appearances, more than any other goalkeeper in the competition’s history.

“The week before I didn’t know I was going to play, I joined the club to play but Bruce Grobbelaar was No. 1,” he remembers.

“I had a few friends from Cardiff come up for the game. Losing the game was disappointing.”

For James, this was the start of an incredible journey, one which sees him currently fifth in the list of all-time Premier League appearances and holding the record for most penalties saved in the competition. Only Petr Cech has kept more clean sheets.

Nowadays, for the younger generations of football supporters, live Premier League matches on television has always been the norm, but it’s not always been that way.

Says James: “I don’t think many people realised how important that first week was but that game against Nottingham Forest being a live televised game on satellite TV, it was the changing of football forever.

“I was nervous for the game, not for the fact that it was going to explode into what we have now.”

What nobody could have guessed then was that Liverpool, who had won 10 of the previous 16 league titles, would take nearly 30 years to get their hands on their maiden Premier League trophy.

The match and the season

Graeme Souness’ Reds went into the inaugural Premier League campaign having only managed a sixth-placed league finish in 1991/92, and they would go on to finish in that same position in 1992/93, 25 points behind champions Man United.

In that respect, the opener against Forest was a sign of things to come, with Teddy Sheringham’s first-half strike seeing Liverpool fall to defeat.

Brian Clough’s side had plenty of opportunities to extend their lead through his son Nigel, as well as Stuart Pearce and Roy Keane, and despite a good opportunity for Liverpool’s Michael Thomas in the second half, the home side were worthy winners.

A week later, Sheringham was sold to Tottenham for a fee in the region of £2 million and Forest would go on to be relegated from the league later that season.