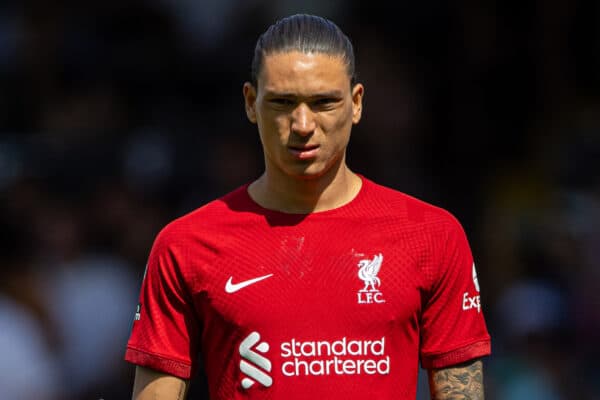 Confirmed Liverpool lineup vs. Rangers: Nunez AND Jota start in 4-2-3-1

The Reds are back in European action this evening after a frustrating 3-3 draw with Brighton in the Premier League, with an all-British tie at Anfield.

In the 130 years the two clubs have been active, Liverpool and Rangers have never met on the competitive stage – their last clash a friendly at Ibrox in 2011 – and the Glasgow side have not been in the Champions League since 2010.

It is a high-profile game, then, and the pressure is on Klopp’s side as they endure a miserable run of form.

Alisson was one of few standouts against Brighton, and the Brazilian will be looking for a rare clean sheet as he starts behind a back four of Trent Alexander-Arnold, Joel Matip, Virgil van Dijk and Kostas Tsimikas.

There is expected to be a change of shape to a 4-2-3-1, with Jordan Henderson and Thiago in a two-man midfield as Fabinho drops to the bench.

That means four attackers start, with Diogo Jota, Darwin Nunez and Luis Diaz all coming in alongside Mohamed Salah.

Ibrahima Konate, Caoimhin Kelleher and summer signing Calvin Ramsay are all on the bench for the first time this season, having recovered from long-term injuries.