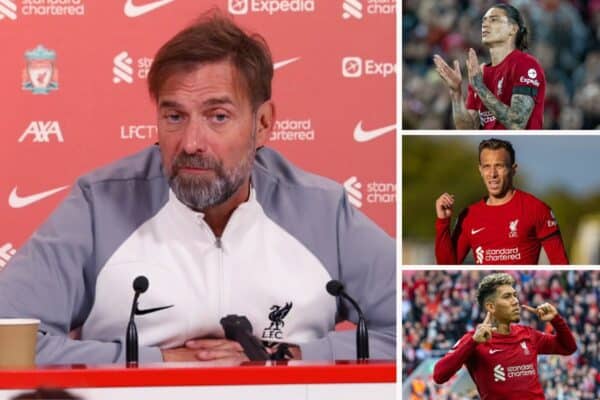 In his pre-Arsenal press conference on Friday, Jurgen Klopp discussed Liverpool’s formation possibilities, Arthur‘s unavailability and the need for his side to become more “unpredictable.”

Here are five key points from the boss ahead of Liverpool’s trip to the Emirates Stadium:

After a comprehensive victory over Rangers and a more solid defensive performance, does Klopp stick with the same system against Arsenal?

He wouldn’t give that away, but he did say he wants his team to become “more unpredictable again.”

“The thing is, it is much more important for us that we become unpredictable again and we need different systems for that, and so it’s not the only system we can play,” he said.

“We have to be more unpredictable, definitely.”

We’ve heard Klopp heap praise on Gabriel Martinelli in the past, and he was quick to do so again here.

He also revealed how he came close to convincing Martin Odegaard to join Borussia Dortmund as a 15-year-old, and singled out the form of Gabriel Jesus and Bukayo Saka among others.

“Martinelli, I was very early very excited about him and he became exactly the player I expected he will be,” Klopp said.

“Martin Odegaard, I spoke to him when he was 15 from Norway, and the whole world wanted him. He decided for Real Madrid. I remember like it was yesterday that we sat around the table with his Dad and we were all so excited…

“Saka, from the first day he’s been playing he’s been incredible, and Gabriel Jesus, if anybody knew how good he could be not in a Man City shirt, in a fixed role as a no. 9, it was Mikel Arteta.”

Klopp was asked to provide an injury update, and revealed Curtis Jones returned to training yesterday having not featured at all this season.

He did, however, reveal some less good news, with Arthur set for a spell on the sidelines after picking up a muscle injury in Liverpool’s final training session before they faced Rangers.

That explains his absence from the squad on the night.

“Curtis Jones was in training yesterday, looked good but only the first session – he’s probably the closest,” Klopp explained.

“There’s one new injury – Arthur in the last session before the Rangers game.

“In a normal situation, he just injured a muscle. We have to wait for further assessment to wait for how long it will be.”

Time to “defend the sh*t out of everybody!”

Jurgen knows that the way to consistency is a solid defence.

“You can not now say ‘now we are back’, we need consistency, and for consistency we need to defend the… rubbish out of everybody,” Klopp told reporters.

Asked to clarify his comment about “defending the rubbish,” Klopp went on to say what he really wanted to!

After a brace against Brighton to continue his goalscoring form, Roberto Firmino was unfortunate to have been omitted from the starting lineup to face Rangers.

Klopp said as much to reporters on Friday morning. Can we expect the Brazilian to return to the XI against Arsenal?

“The goals he scored were outstanding against Brighton. We play a lot of games and things like this.

“Bobby is an incredibly important player to me and for us.

“I am happy with his record so far and hopefully he can put a few more in.”