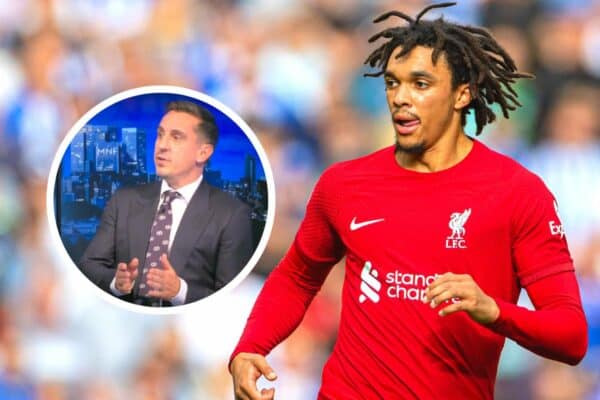 Despite his recent poor Liverpool form and omission from England’s squad to face Germany, Gary Neville says he believes Trent Alexander-Arnold can become “the best right-back the world has ever produced.”

In a detailed analysis of Alexander-Arnold’s struggles for Liverpool this season, the former Man United and England full-back honed in on the ways Liverpool’s no. 66 can improve defensively.

Alongside Jamie Carragher, Neville provided examples of how the 23-year-old has let himself down with his body positioning and work-rate in recent weeks.

The Sky Sports pundit pointed out four “principles of full-back play” that he claims Alexander-Arnold should be working on in order to improve his game.

And Neville believes that should Alexander-Arnold iron out the “really basic” defensive aspects of his game, he could go on to become the best right-back to have ever played the game.

“The hard part of the game, he is doing. No full-back that I’ve ever seen in this country can do what he can do.

“If he can just work on those four basic things and get those consistency elements with those things, we won’t just have one of the best attacking right-backs this country has ever produced, we’ll probably have the best right-back the world has ever produced, because this is a Cafu, this is that level of full-back, this is something unbelievably special.”

How Trent can improve

There are big questions as to whether Alexander-Arnold will be included in England’s squad for the World Cup next month.

And if the Liverpool right-back doesn’t go, Neville claims it could be a positive, to allow him time to improve his defensive capabilities.

Going into more detail, Neville explained how Alexander-Arnold’s “upright” body position has caught him out on a few occasions this season.

“What you can’t have, when you’re defending in a 1v1 position in the last third of the pitch, you cannot be upright,” Neville explained.

“Against Brighton, his body shape was closed for the first goal. He was too narrow. He wasn’t in the right position, he wasn’t alert and he panicked. He’s doing the hard part of the game, it’s the basics where he’s struggling.

“Trent has been exceptional for four or five years for Liverpool. Every full-back now needs to have both attacking and defensive strengths. His attacking statistics are absolutely ridiculous – one of the great talents this country as produced.”

Whatever you think of Neville, this was football analysis at its finest. Constructive criticism, but still extremely complimentary about Alexander-Arnold’s natural ability.