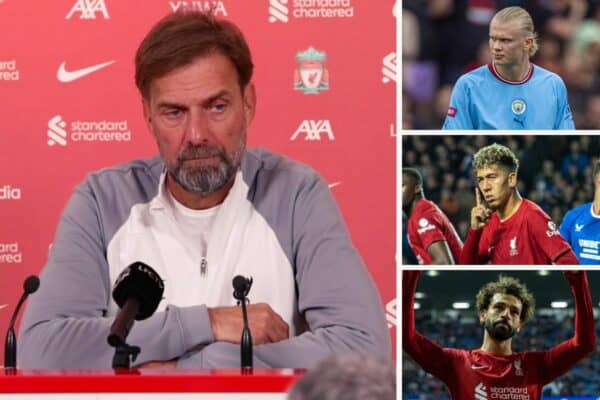 Jurgen Klopp fielded plenty of questions about Erling Haaland in his pre-Man City press conference on Friday, while also discussing Roberto Firmino‘s form and the use of Mohamed Salah in a more central position.

Here are five key points from the Jurgen as the Reds prepare to host the Premier League champions:

In recent years, Klopp has made no secret of his opinion that Pep Guardiola’s Man City are the best side on the planet, and it was no different here.

“They are in the moment definitely the best football team in the world, that’s how it is. But we will give it a try anyway…” he said.

“Like always, when you play against the best striker in the world at the moment, you have to make sure he doesn’t get that many balls…”

“Salzburg, when we played them,” he said when asked when he first became aware of Haaland.

“You could see the potential. He didn’t start at Anfield, he came on, but we were already busy thinking about him, how to shut him down. And he scored anyway!”

In recent years, the build up to this fixture has centred around the title race, but with Liverpool currently 10th in the Premier League table, things are slightly different on this occasion.

When it was put to Klopp that this game was not “a title decider” this time, the boss implied the game could still have implications for those battling with City at the top of the table.

“It could be this year, just not with us!” Klopp said.

“When you play City, results left and right are not really important, because this game requires all your focus and all the things you know about football.

“It’s the biggest challenge you can face in football.”

Spreading the goals and Firmino

The boss was also asked about Firmino’s good form, with the Brazilian now up to eight goals and four assists for the season.

But he is refusing to get carried away, pointing out that there have been plenty of games where the whole squad, including Firmino, have not performed to standards.

“Bobby is in a really good moment. Really happy for him. We just need to spread the goals a bit more to different games!

“He is an exceptional player but it’s not like he was flying in all the games. We didn’t have the best start in our lives for different reasons, but scoring two at Rangers helps.

“Nothing changed for him. He always played when he was fit and contributed when he played. But we know there’s a big gap between Rangers and Man City so we have to prepare the game in a different way.”

Salah to play up top?

The Egyptian’s record-breaking hat-trick at Ibrox came after he was brought on as a central striker, rather than being deployed on the right-hand side of the attack.

However, the manager insists that he doesn’t believe the goals “had too much to do with the position.”

“It’s not so different. Whichever system we play, for finishing you need to be in and around the box, that’s how it is. He was there, definitely.

“I don’t think it had too much to do with the position. There were situations when we were in possession where Mo went to the right side, to his right wing.

“It’s completely normal. You need to be flexible, to need to fill up the spaces, you need to force the defensive players to react on different scenarios.”

Is Klopp doing a Pep here, or could there be more injury worries on the horizon for Liverpool?

The boss did not want to elaborate on any potential fitness concerns, claiming he was still working out who came through the Rangers match unscathed.

Let’s hope it’s just a case of giving the opposition as little to work with as possible!

“We still have to figure out who is available after the Rangers game for the City game, and then we will make a lineup.

“We have to see. No final decisions yet.”