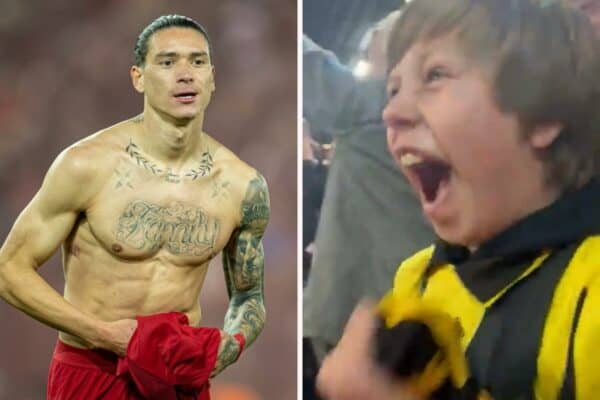 How Darwin Nunez made Uruguayan fan’s day with Anfield gesture

Darwin Nunez was greeted with a Uruguay flag in the stands after Liverpool’s 1-0 win over Man City, but would have been surprised to see a Penarol shirt.

Nunez made his way to Liverpool from Benfica this summer in a club-record deal worth up to £85 million, capping a rapid rise from South America to the pinnacle of Europe.

The No. 27 has taken time to find his feet in the Premier League, with two goals, one assist and a red card in his six appearances in the English top flight so far, but he appears to be turning a corner.

It is a long way from Montevideo, where he first broke out with Penarol as a teenager.

Penarol operate in the Uruguayan Primera Division, with Nunez coming through their academy and going on to play 22 times for the first team, scoring four goals, before departing for Almeria in the Spanish second tier.

He is now a regular starter for Uruguay, and a group of his compatriots appear to have made the trip to Merseyside for the clash with Man City on Sunday.

Spotting his national flag and the black and yellow of Penarol in the stands, Nunez jogged over after full-time and handed his shirt to one of the young fans.

The reaction was one of pure joy, with the striker clearly making the day of those supporters of his boyhood club, 6,725 miles away.

Nunez is likely to be given increased game time in the weeks to come, after injury to Diogo Jota added to a long-term issue for Luis Diaz.

The 23-year-old can be expected to rotate with Mohamed Salah and Roberto Firmino as one of the regular options up front, while there is a chance he is utilised on the left, too.