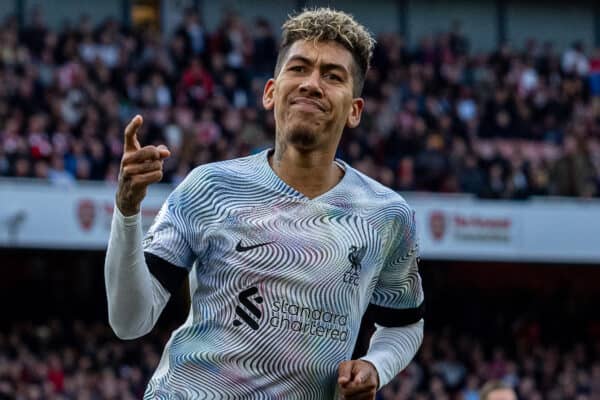 It has been far from a vintage start to the Premier League campaign for Liverpool, but Roberto Firmino is producing elite form in front of goal.

With two wins in eight, leaving them 10th in the table and closer to the relegation zone than the top four, the Reds have been hugely disappointing so far this season.

A 3-2 defeat to Arsenal on Sunday saw them fall further from their aims in the top flight, with the Gunners reclaiming top spot as they sit 14 points clear of Jurgen Klopp‘s side.

There have been few positives to cling to, with few individuals operating at a consistently high level, but Firmino certainly stands out as one of the top performers.

The Brazilian came off the bench to score an equaliser to make it 2-2 at the Emirates, bring his goal tally to six in seven games in the Premier League, having also laid on three assists.

And as highlighted by the Premier League‘s official Twitter account, only Erling Haaland is averaging fewer minutes per goal or assist than Liverpool’s No. 9:

Making an impact in front of goal ? pic.twitter.com/lo5JlpAFMD

Haaland has scored or assisted every 42 minutes, while Firmino is contributing at a rate of one every 52 minutes – at least 27 minutes more than any other player.

The 31-year-old has only started five times in the Premier League so far, but is proving increasingly important, with all of his six goals and three assists coming in his last five outings.

With Luis Diaz facing at least two months out with a knee injury picked up at Arsenal, Firmino’s role should only become more prominent in the games to come.

He cannot be expected to score at Haaland levels, with Klopp himself insisting that it would be unfair to compare “anybody with that,” but the hope is that Firmino can maintain his form long into the future.