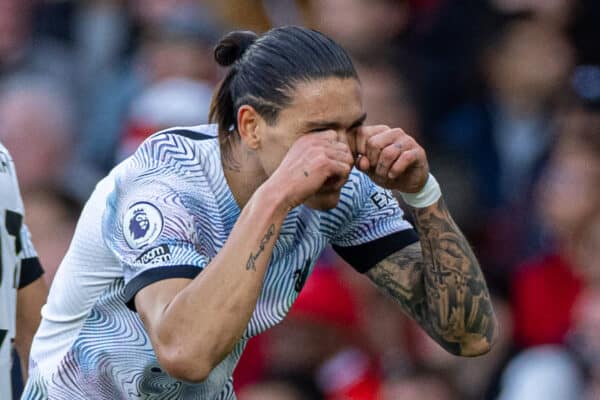 Jurgen Klopp says Darwin Nunez was “unplayable” in moments against Rangers last week, with the Liverpool striker in good form heading into the return fixture at Ibrox on Wednesday.

The Uruguayan followed up his encouraging performance against the Scottish outfit with a goal in the Reds’ 3-2 defeat to Arsenal on Sunday, with his form one of the few positives that could be taken from a difficult afternoon at the Emirates.

Nunez’s start to life at Anfield has been far from straightforward. The red card he picked up against Crystal Palace in August resulted in a three-game ban, and he found it hard to work his way back into the starting lineup.

But Klopp’s recent decision to change the set up of the team to a 4-4-2 formation looks to have played into his hands.

Liverpool’s club-record signing is expected to get plenty more game time in the coming weeks, especially with the team’s attacking options depleted after Luis Diaz picked up a knee injury that is expected to keep him out until after the World Cup.

“There were a lot of good moments against Rangers, I would say – in moments unplayable, but then still big goalie saves.

“Now he got the goal, he was really working hard for that. That was positive, for sure.”

Nunez initially hit the ground running for Liverpool, with four goals in a pre-season friendly against RB Leipzig and a match-winning cameo against Man City in the Community Shield.

Diogo Jota, who lined up behind Nunez against both Rangers and Arsenal, has also been encouraged by Nunez’s form, and believes the rest of the team are starting to play to his strengths.

“Obviously he started really well and people were starting to think his adaptation was never a problem but maybe it required a few more games to get used to that level that he showed us and he showed everyone last year,” Jota said.

“And with this run of games he is having, he has already scored and I think he is finding himself in a better position and people in the squad are understanding his game better.”

It will be interesting to see if Nunez is handed another start on Wednesday evening, or whether Klopp would prefer to hold him back for Sunday’s Premier League meeting with Man City.

But at a time when Liverpool continue to struggle with performance levels, results and injuries, Nunez’s form has been one of the few positives to emerge from a difficult period for the club.