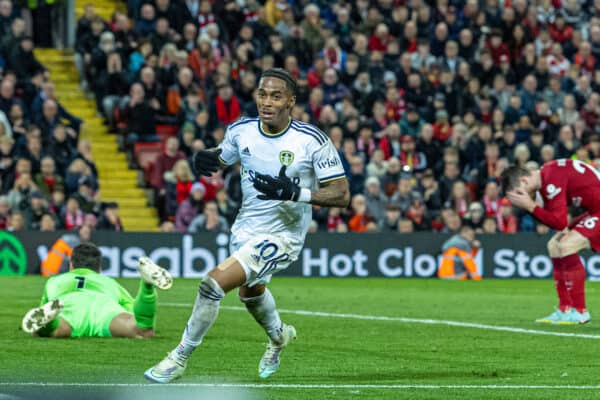 Not wanting to tempt fate like, but when it comes to Liverpool’s 2022/23 Premier League travails, following up a win over Man City with losses to Forest and Leeds will take a lot to beat when it comes to setting a low benchmark…

A fortnight ago, we found ourselves with a foundation to build from when it came to the potential rehabilitation of our league campaign, as an electric and antagonistic afternoon at home to the defending champions ended with three points being gained.

Three nights later, this had been strengthened with another win at home to West Ham.

With Forest and Leeds blipping onto our radar, a path to a healthier position had been illuminated, something to add to a Champions League picture that was developing a little more positively than it had looked after an opening-night thrashing at the hands of a rampant Napoli.

Still by no means hitting the high notes that we know we are capable of, Jurgen Klopp and his team had rested upon an uneasy alliance with potential consistency.

All of that has now been undone across the last 180 minutes plus injury time of league football. Back to the drawing board we go, for the creation of another fresh blueprint on how to take one step at a time.

Liverpool is a team that thrives on coruscating confidence, yet it is a collective that struggles with ruts. We are the masters of peaks and the cowed servant of troughs.

On one hand, we can be mentality monsters, on the other we fear the poor form that lives under the bed, unable to comfortably deal with it when it rears its ugly head.

If these downtimes are the taxes we have to pay for the extraordinary good times we have been delivered, then so be it.

It’s still infinitely better than living that middle ground we dealt with for the best part of three decades, where we caught occasional glimpses of the promised land only for the mirage to fade.

A treble recently secured, and a metronomic figure having moved on for a fresh challenge, Liverpool had essentially exhausted themselves with their endeavours of the previous three seasons.

We were awful until the clocks went back, and even then, we still struggled for true consistency, picking off positive results without performing to the best of our abilities on a regular basis.

Having phoned it in against Forest, it wasn’t for a complete lack of effort against Leeds. This one was all about indulging in too many basic errors and not grasping the moment when our chances did arrive, beyond Mo Salah’s equaliser.

The will was there on Saturday night, but the focus wasn’t.

The way we conceded the opening goal was the perfect synopsis of our season so far.

Individual mistakes are clearly being made, with some heads and form dropping more than others, but it is the failure of the collective that is of greater issue.

The nature of the wounded supporter means that scapegoats will still be identified by an increasingly agitated congregation.

It’s also gone a bit mid-1990s Terry Venables with the deployment of the 4-1-2-1-2 formation. This is regressive football compared to what we have become accustomed to; it makes us more predictable, and far more pliable.

Opponents are permitted to think more about what they can do with the ball, rather than how to stop us doing what we do with it.

On the Venables Scale, the next step would be the Christmas tree formation; I suppose with 55 shopping days left until the big day, ‘tis the season.

Outside the ground prior to the game, the concept of Saturday night football had many of those I spoke to scratching their heads, most of them disorientated that they had been summoned to Anfield, at a time of the week that they normally associate to ordering a takeaway and watching TV programmes they claim their other half make them view, yet secretly enjoy themselves.

Result aside, I’m all for it though, at least in theory. I’m usually drawn to Saturday night Serie A fixtures to go along with my takeaway.

I love the continental approach to it, and the fact that it’s less rushed. There is less traffic on the road, both on the way in and on the way out. It’s all very grown up, or at least it should be.

The problem is a large proportion English football supporters aren’t grown up enough for it. Away sections are increasingly resembling mass stag dos.

On Saturday night, I’m sure that somebody named Billy, from New Wortley, will have been utterly delighted to have been stripped and tied to a lamp post when on his way back to his West Yorkshire-bound coach. Great days, etc.

‘Always the victims’ boomed out in less than three minutes, further renditions during the second half, stories of the national anthem being sung in the club shop in town, just as it was in the away section, and copies of The S*n being held high at Lime Street.

In the neverending battle to stay classy, the cause is forever out of reach for an escalating number.

The thing that amazes me most is that, in an era of perpetual austerity, there are infinitely cheaper ways for people to get their weekly fixes for being complete and utter gobshites, rather than forking out on Premier League tickets.

Unfortunately, this level and regularity of pre-planned antagonism is here to stay. Soon it will be a pleasant surprise when a set of away supporters come to Anfield and don’t sing poverty ballads and Hillsborough ditties.

Onward to our next attempted step forward we go.