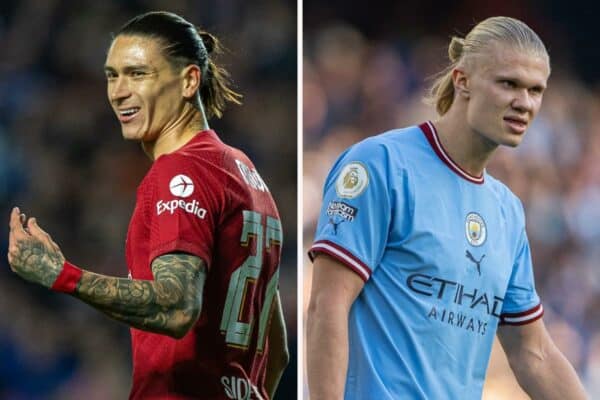 As two big-money signings of a very similar profile for the country’s two leading rivals, the comparisons between Nunez and Haaland were inevitable.

So when the Uruguayan netted in the Community Shield back in July, while the Norwegian stuttered, it was painted as first blood to Liverpool – but the tide has turned since then.

In 13 games for Man City so far, Haaland has scored 20 goals, while Nunez has only recently found form again, netting in back-to-back outings to bring his tally to four in 10.

The narrative is not helpful for a player who was visibly relieved to end a mini-drought with goals against Arsenal and Rangers, and Klopp believes that the luck required will come with consistency.

“Let me say it like this, I think Darwin Nunez would have scored a couple more goals if he would have played in the centre of Man City this season as well,” the Liverpool manager said.

“He would be a really good striker for them as well, finishing the situations off.

“We have to improve our game to bring him more often in situations and all these kinds of things.

“I don’t know, I hope he’s not in this process where he compares himself with Erling Haaland. But I think he’s really making steps here.

“You could really see it in his face and everything, this goal was really important to him.

“Like all the goals are important, but it looks like somebody closed it for you; you can do what you want but the goalkeeper brings a hand on it or foot on it.

“Everybody says ‘yeah, you have to finish differently’, but how I said with the goal from Bobby, and Joey’s pass, Bobby could put it in each corner, but he didn’t, he just hit the ball and it goes through the legs.

“That’s what a striker does sometimes as well. If [the luck] is running, then the ball goes through his legs; if it’s not running, you hit the foot of the goalkeeper and the ball goes out.

“The first chance for Mo, nice chip from Thiago in behind and Mo doesn’t hit the ball properly. If he hits it a little bit better the ball rolls in the goal already.

“So we need these moments, keep going. And don’t compare.

“I hope he’s not doing that and doesn’t think about that. I don’t see that.

“We are in our situation and we want to sort our situation. That’s all we are concerned about, to be honest.”