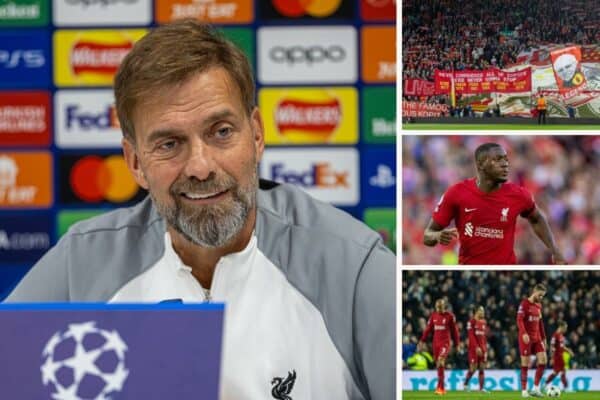 Jurgen Klopp once felt press conferences were “like a holiday” but with Liverpool’s turbulent form leading to criticism, it’s now “tough” – as it was ahead of Napoli’s visit.

Here are five key points from the manager as he previewed Tuesday’s game:

Not time for ‘massive rotation’

There are three days between Liverpool’s last game, against Leeds, and the visit of Napoli, a timeframe that is not conducive to a lot of rest.

But while this fixture is all but a dead rubber on paper, with a slim chance of winning the group by a four-goal margin, Klopp has said it is not the time for “massive rotation.”

“Quick turnaround, not fully aware of the situation [fitness] of the players who played vs. Leeds,” Klopp said.

“We will not take risks but if you watch football, you would know Napoli is in incredible shape.

“Not a game for massive rotation, not that we have to win 4-0, we want to win but the result in the moment is not really important.”

…but time for Konate to start?

Ibrahima Konate was again on the bench on the weekend for the second successive game following three games out with injury, but could he be back in the XI on Tuesday?

“Very good we have him back, was ready for the squad and maybe now is when he can play,” was what the manager had to say.

As for Joel Matip, it was a firm “no” as to being in contention – that will make it seven games missed for the centre-back.

After yet another defeat on the weekend, there is no escaping the criticism if you’re Jurgen Klopp and he was asked if this is the end of the cycle.

“In the moment, it’s not 100 percent fair to judge this team, this squad – we missed quality up top, we can’t make changes and a similar situation in midfield,” he said.

“Even if it’s unfair it’s fine, it’s normal and right to ask these questions but we have to answer that later on.

But the “fight” is not something Klopp thinks is missing, far from it.

It all starts with ‘winning the first challenge’

The game may not have a lot on the line when it comes to Champions League survival, but Klopp wants the crowd and players switched on from the very first contest.

“Let’s make something special out of this game, for us,” Klopp said.

“The whole thing starts with ‘win the first challenge’ – and celebrate it in the stands on the pitch. Not by running around, just by feeling it – that’s the first step.

“Then go from there.

“I’m ready for that and the people gave me the sign after the game they’re ready for it as well.”

To Anfield, we go.

Always starting on the back foot

Liverpool have conceded first 10 times this season, five of those before the clock has even hit 20 minutes – a statistic that Klopp has not been particularly fond of addressing.

There is an understanding of why the spotlight is on, but that each of the goals conceded come from a different avenue makes for another issue in itself alongside the timing of them.

“I understand you ask the question, all the goals are completely different,” he said.

“Yes, of course, it’s concerning but we don’t go in each game ‘don’t concede the first goal’ – it’s clear in football.

“Stability is our issue, there are highs but too many lows in the season.”